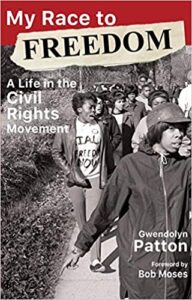 [She led a campaign] demanding that the National Student Association pay reparations to an affiliated student group, the National Association of Black Students. Although this and other accounts from those ‘Black Power’ years are informative, even riveting, in the end the central story line is Gwen herself through the life she exercises with dedication, principle, and an unbending devotion to justice, equality, and the well-being of all people.

— Bob Moses, Forward to My Race for Freedom

Gwendolyn Patton was a long-distance runner for the freedom of Black people and all people in the US and around the world. In the last years of her life she wrote an autobiography, My Race to Freedom: A Life in the Civil Rights Movement, that has just been published three years after her death in 2017.

I was a good friend and movement brother in the struggle for justice with Gwen. We met at a national conference in Washington, D.C. in February, 1984 that founded the National Committee for Independent Political Action. NCIPA’s main work that year was to support the Rainbow Coalition campaign of Rev. Jesse Jackson for President. Gwen became a leader of NCIPA, and for years we worked together.

One of my strongest memories of Gwen is her being at the first of 10 annual, week-long, summer Leadership Institutes of the Future Leaders Network, a project of NCIPA and New African Voices Alliance. Over the course of its life, we brought together a multi-racial mix of hundreds of teenagers to these progressive leadership training gatherings.

Gwen arrived a few days after the first one started, and it had been a rough start. We adult counselors had our hands full with some very spirited young people who had their own ideas about what should happen at the camp, not all of them positive. But the evening she arrived, Matt Jones, a former member of the SNCC Freedom Singers, was there to sing freedom songs from the civil rights movement of the 1960s. As he began he brought Gwen up to sing with him, and the young people were mesmerized as Matt and Gwen told their stories of life in and sang songs from that movement. Everything turned around, and the rest of the camp was all we had wanted it to be.

This is just one of many stories that could be told about Gwen and her importance to so many people.

My Race to Freedom tells the story of Gwen’s early life in Detroit where her parents had moved from Montgomery, Alabama in 1941 as part of the “great migration” of Black people to the north. As she grew up, she spent summers in Montgomery with her extended family. Her father took a job working in a Ford factory where he became a union leader.

Gwen had a good example to learn from about organizing. “My first introduction to organizing was listening to him talk about the interplay between the workers and the bosses. I remember one riveting incident when the assembly line workers staged a slow-down after an unpopular foreman, a Pole, moved to fire a man.” Through group action, the workers had him “moved to another section of the plant.”

The bulk of the book gives many details that were of real value to me as someone who was not active in the civil rights movement but who has learned a lot about it. One particular focus of Gwen’s story is Tuskegee Institute in Alabama and what went on there as the civil rights movement of the 50s led to the emergence of the Student Nonviolent Coordinating Committee, SNCC in 1960. As the movement heated up in the South, Gwen was right there in Alabama, having moved back in 1960, doing her part as a student activist and then student body president at Tuskegee Institute to successfully move the students into active participation in that movement.

Of particular interest is Gwen’s analysis of the class differences within the Black community and how she worked to both build united, principled unity in action against Jim Crow segregation and racism among all classes, while also working to build the leadership of Black working-class people within the movement.

In 1967 Gwen moved to New York City. For the next twelve years she lived in the northeast in either NYC or Washington, DC., while also traveling throughout the country as a speaker, especially on college campuses. She worked for the National Welfare Rights Organization, the Student Mobilization Committee Against the War, Union 1199 and the National Alliance Against Racist and Political Repression. She became a teacher, first teaching at the School for Contemporary Studies in Brooklyn. She was a founder and, for several years, leader of the National Black Anti-War Anti-Draft Union.

Her time up north led to her involvement with the white Left, which she did not find to be the easiest thing to do. Her analysis of her experiences with different socialist and Left groups is instructive. She ultimately ended up joining the US Communist Party despite having reservations about it.

In 1978 she decided she should return to her roots and moved back to Montgomery, Alabama. She “kept food on the table with various teaching and administrative positions at Tuskegee, Alabama State University, and Trenholm State Technical College.” She continued her progressive organizing with a number of different organizations until her death in 2017.

Thanks is due to Randall Williams, who made sure to finish the editing of Gwen’s manuscript, and NewSouth Books. My Race to Freedom is now available for the world to read and learn from. It’s well worth doing so if you’re in the progressive movement and intend to be in it for years to come.

This article was posted on Sunday, October 18th, 2020 at 8:11am and is filed under Activism, Book Review, Solidarity.