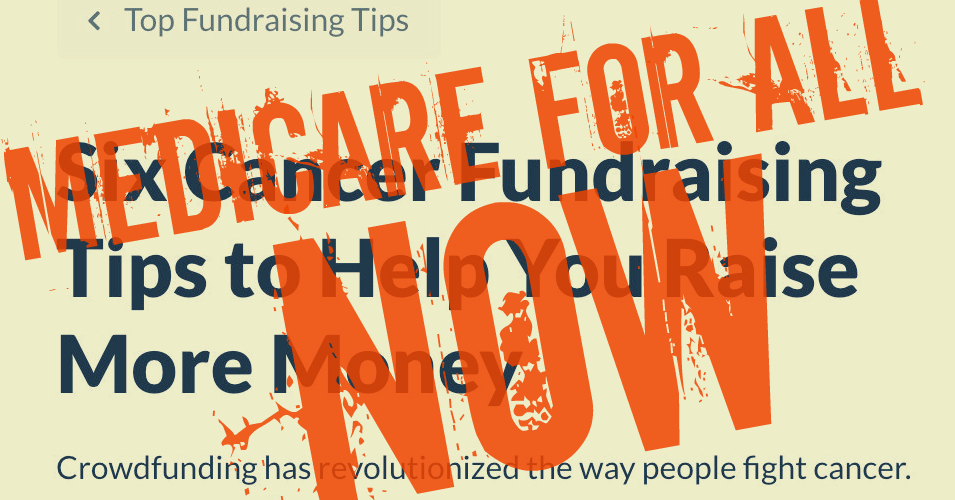 A day before a crucial hearing in the U.S. House of Representatives focused on crucial Medicare for All legislation, 2020 Democratic candidate Sen. Bernie Sanders on Monday denounced as an “abomination” the fact that crowdsourcing company GoFundMe has a page on its website offering “Six Cancer Fundraising Tips to Help You Raise More Money” for those suffering from the combined tragedy of a cancer diagnosis and being too poor to afford medical treatment.

Not upset with GoFundMe for providing resources to those in desperate need, Sanders lashed out against a system that creates the need for such campaigns in the first place.

“No one should be forced to use GoFundMe for health care,” Sanders stated. “We are the richest country on Earth and we are going to take care of our people. Medicare for All now.”

This is an abomination.

No one should be forced to use GoFundMe for health care.

We are the richest country on Earth and we are going to take care of our people.

Medicare for All now. pic.twitter.com/QhWZHH6P36

The GoFundMe resource page referred to by Sanders states, “Crowdfunding has revolutionized the way people fight cancer. Through crowdfunding, it’s simple for people to quickly raise money to pay medical bills and find both financial and emotional support from their community. These cancer fundraising tips can help you find financial relief so you can focus on your health.”

However—as Sanders suggests in his tweet and single-payer advocates have long argued—the fact that a whole U.S. industry has grown up around the need for crowdfunded healthcare campaigns simply illustrates just how grotesque the nation’s for-profit system has become. It’s not just GoFundMe. Other platforms like MedStartr, CoFundHealth, and YouCaring—just to name a few—are all built for the same purpose.

On Monday, showing just how crippling and prohibitive medical care remains in the U.S., a new national survey by Gallup revealed that one out of every four Americans says that either they or someone in their family has delayed medical care for a serious illness over the last year.

So what are the six things that people trying start a crowdfunding page need to know? According to the GoFundMe page, it’s actually just five things:

On Tuesday, as Common Dreams previously reported, the House Energy and Commerce Committee will hold a public hearing on “The Medical for All Act of 2019,” introduced earlier this year by Rep. Pramila Jayapal (D-Wash.). While not a verbatim companion bill to Sanders’ version in the Senate with the same name, the two bills are considered the strongest pieces of single-payer legislation now in Congress.

As part of its broader Medicare for All push, the Sanders campaign on Monday also released a new video debunking the frequent attacks on Medicare for All by its opponents who argue that having so-called “choice” in healthcare is a vital reason to preserve the for-profit model that allows private insurances, drug companies, and hospital corporations to profit of the people’s illnesses. Watch:

The insurance companies are lying about Medicare for All.

Medicare for All means freedom.

It is the freedom to go to the doctor, hospital or clinic of your choice.

It’s the freedom to see a doctor when you need to, regardless of your income or zip code. pic.twitter.com/lkYibBKlAu

In response to Sanders’ tweet about GoFundMe, one respondent on the platform offered this single “tip” to make sure people are no longer subjected to the whims of private for-profit insurers or forced to have themselves, their family, or friends wage a crowdfunding campaign for treatment that would otherwise be guaranteed.

“Tip #1,” the person wrote: “Get a single payer system so that no one ever has to crowd source healthcare to stay alive in this country ever again.”