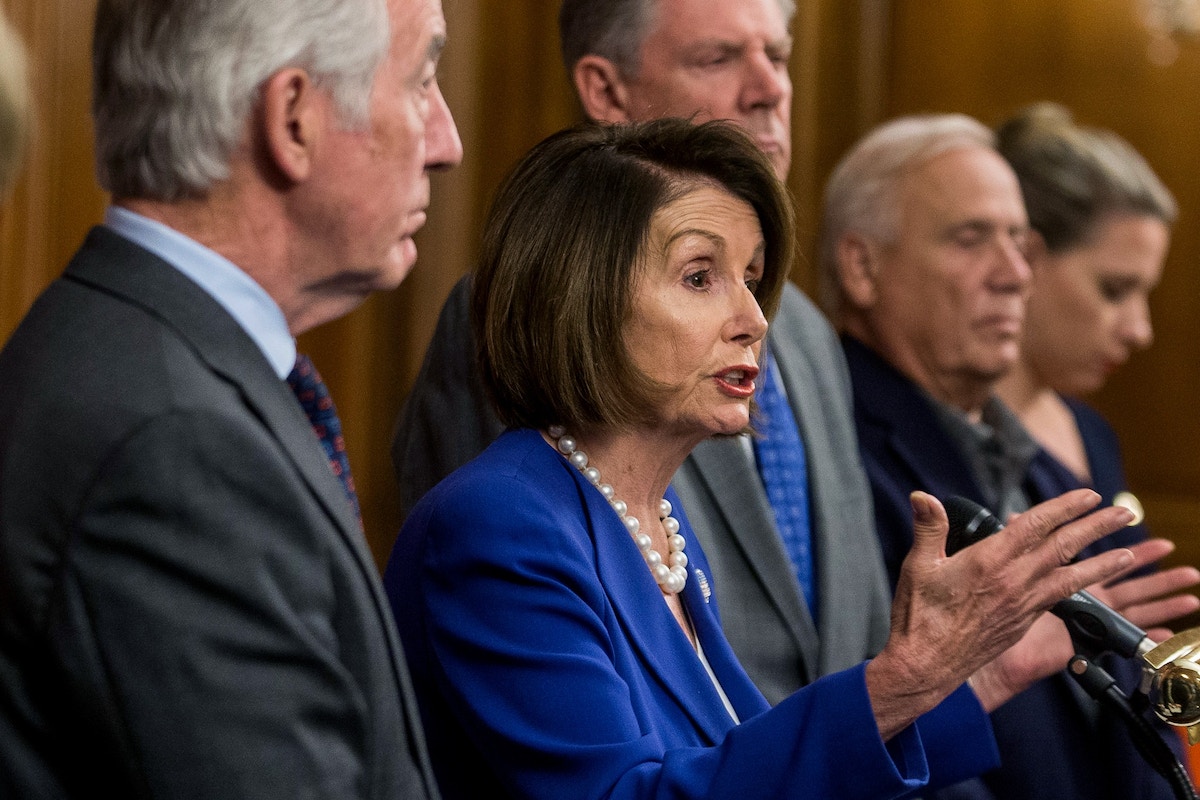 Sens. Bernie Sanders and Elizabeth Warren have taken the side of the Congressional Progressive Caucus against House Speaker Nancy Pelosi in a dramatic fight over the details of a drug-pricing bill that has been a source of intra-caucus sparring all year.

Pelosi is hoping to move quickly to a floor vote to satisfy a major 2018 campaign pledge that Democrats would work to lower drug prices. Progressives led by Reps. Pramila Jayapal and Mark Pocan, who are pushing for changes to the legislation, are standing firm, arguing the bill is far too modest and would do little if enacted — which, given the makeup of the Republican-majority Senate, it won’t be.

On Saturday, Warren tweeted, “@PramilaJayapal is right. Drug prices are crushing American families. A bill to fix this shouldn’t work for only some drugs or some people—it should help everyone afford lifesaving treatments.” The next day, Sanders retweeted a plea by the Progressive Caucus to get its “key improvements to take on pharma greed” into the bill.

The bill, H.R. 3, the Elijah E. Cummings Lower Drug Costs Now Act, will not become law, whether Pelosi’s version passes or whether the stronger elements preferred by the Progressive Caucus are included. Senate Majority Leader Mitch McConnell will bury it with the other 400-odd pieces of legislation in his graveyard. But the importance of this House Democratic squabble goes well beyond a single bill. It will indicate whether the 98-member Progressive Caucus, which grew in size this year, is willing and able to fight for policies it believes in. How hard progressives push back against Pelosi will determine whether she will continue to ignore progressives as she pursues her policy framework, or whether she’ll have to respect and include them.

It’s not hyperbole to call the fight a potential bend point in the history of the Democratic Party, with stakes much higher than they appear. Pressure on House Democrats to approve the legislation is compounded by the naming of it after the late revered Cummings, who died of health complications in October. But in an irony that would surely not have been lost on Cummings himself, he had sponsored his own drug-pricing bill which was significantly stronger than the one his name is now attached to. Sanders co-authored the original Cummings bill.

The Rules Committee is expected to vote on the bill Tuesday afternoon, which would then allow it to move to the House floor for a vote. The Progressive Caucus has been surveying members the past several days, encouraging them to vote against the rule for the bill, which would block it from coming to the floor and send it back to the legislative drawing board. A source involved with the whip operation said that so far “the count is excellent,” expressing confidence that enough members of the caucus would stick together. (Before the House votes on a bill, it first votes to approve or reject the “rule” under which it would be considered. Taking down the rule is a way to block the underlying bill from a vote.)

There are 233 Democrats in the House of Representatives, and Pelosi needs 216 if everybody votes. (The vote threshold would typically be 218, but is lower because the seats of Cummings and former Rep. Katie Hill are empty, as are two GOP seats.) All Republicans are expected to vote against the bill, so if just 18 of the caucus’s 98 members vote down the rule, it would fail — and Pelosi would have to turn to progressives if she wanted to pass the bill. Rep. Alexandria Ocasio-Cortez, D-N.Y., will vote against the bill, according to her spokesperson Corbin Trent. “They stripped out everything that looked like progress,” said Trent.

The relative weakness of the bill coming to the House floor makes a mockery of the health care debate unfolding on the presidential campaign trail. While 2020 Democratic hopefuls debate a sweeping, comprehensive reform of the health care system, Democrats in the House are having trouble giving authority to the government to negotiate lower prices for more than a mere 25 drugs. The gap between the two debates could hardly be greater, even though Democrats in the House have a free hand policy-wise: After all, the bill has little chance of passing the Senate and becoming law, so it’s largely a messaging exercise.

All year long, the relationship between the Progressive Caucus and House leadership has simmered behind the scenes, emerging only in fitful moments, like in July when Pelosi resigned to passing a border supplemental spending bill that added few checks to the Trump administration’s cruel caging-of-children policies. The impeachment fight has mostly created unity among House Democrats, against a common enemy’s efforts to abuse the power of the presidency by leveraging foreign aid in order to damage a domestic political opponent. But lingering in the background all year has been the drug-pricing fight.

As the American Prospect documented last Friday, Pelosi and her staff, led by top health policy aide Wendell Primus, have frozen out progressives from deliberations over the Lower Drug Costs Now Act, exerting extreme control over the process. They bypassed legislation that Rep. Lloyd Doggett, D-Texas, wrote, which, thanks to progressive organizing, had the support of a majority of the caucus. Instead, Pelosi and Primus sought to find a compromise with the Trump White House, only to see Trump savage the bill on Twitter, indicating that it didn’t have his support. Despite that reversal, all the provisions weakened or watered down to gain Trump’s support remain in the bill, leaving open large gaps in who will benefit from the effects.

The tensions over the bill are rooted in a provision that will, for the first time, allow direct price negotiations between the government and major drug companies, creating an exemption to a noninterference clause banning such negotiations that was instituted in 2003. As written, however, the bill sets a floor of just 25 high-cost drugs that will be negotiated per year, rising to 35 in the tenth year of the bill’s enactment. The CPC and drug-affordability advocates believe this floor will operate as a ceiling, and that a higher minimum of negotiations ought to be mandated. Progressive caucus leaders would also rather see the noninterference clause stricken entirely, giving more flexibility to government officials to expand the scope of negotiations.

In addition, the uninsured will not see any benefits from the price negotiations and will be forced to pay whatever price drug companies can command. Nicole Smith-Holt, whose diabetic son died after he went off her insurance at age 26 and could no longer afford insulin, explained to the Prospect last week that “People like my son Alec wouldn’t have benefited. It wouldn’t have saved his life. And a lot of other lives would be at risk too.”

Perhaps the final straw for progressives came when Pelosi’s office decided to gut an amendment that Jayapal passed through the House Education and Labor Committee, which would expand proposed rebates for excessive price spikes to certain drugs under Medicare to also cover group health plans. Instead of having the secretary of labor conduct a feasibility study on the expansion and then affirmatively devise regulations to accomplish it, Pelosi’s office threw out everything but the study, which is frequently how Congress kills policy.

After being shut out of a high-priority legislative action — drug prices were one of the top issues in the 2018 midterms — and having the improvements they did get in whittled down to nothing, the Progressive Caucus decided to rebel. On Friday afternoon, they began whipping Progressive Caucus member offices on whether they would be willing to vote against the rule for the Lower Drug Costs Now Act.

A Democratic source confirmed that “a substantial number of progressives” would vote against the rule if certain priorities — restoring the Jayapal amendment, increasing the minimum drugs negotiated, striking the noninterference clause, and making sure the uninsured benefit — were not included in the final text.

Pelosi’s team seemed unmoved by this threat, with an aide telling The Hill, “Representatives Pocan and Jayapal are gravely misreading the situation if they try to stand in the way of the overwhelming hunger for HR3 within the House Democratic Caucus and among progressive Members. … The Lower Drug Costs Now Act will pass next week.”

The aide also made the laughable suggestion that maintaining Jayapal’s amendment would force the Congressional Budget Office to reanalyze the bill, eating up too much time before the end of the year. Jayapal got her amendment through the Education and Labor Committee in October, meaning that there were two months to have CBO analyze the effects.

Pelosi appears to be banking on progressives’ past failures to follow through on their threats and defy leadership. But with Sanders and Warren siding with Jayapal and the CPC over the weekend, the progressive caucus may finally have the impetus to block the bill in its current form. The senators’ statements also mean that Pelosi now must contend not only with the left-wing elements of her caucus, but the two presidential candidates commanding a substantial chunk of the primary electorate. On the other hand, passing a messaging bill on drug pricing is a high priority for Democrats up for reelection in tight races, no matter the details, and progressive will be under intense pressure to go along on their behalf.

The Progressive Caucus has not taken a stand like this in some time, perhaps not since it pledged to oppose the Affordable Care Act if it didn’t include a “robust public option” in 2009 and 2010 — a pledge that was broken. Because Pelosi finds the bill’s passage to be an important marker of the House continuing to govern amid the impeachment inquiry, it has become a viable fight for progressives. A loss would be extremely embarrassing to Pelosi, and would signal that progressives do have the power to dictate terms on policy when they so desire — or at least can’t be utterly ignored. If the House manages to pass it without improvements, the opposite conclusion can be drawn.