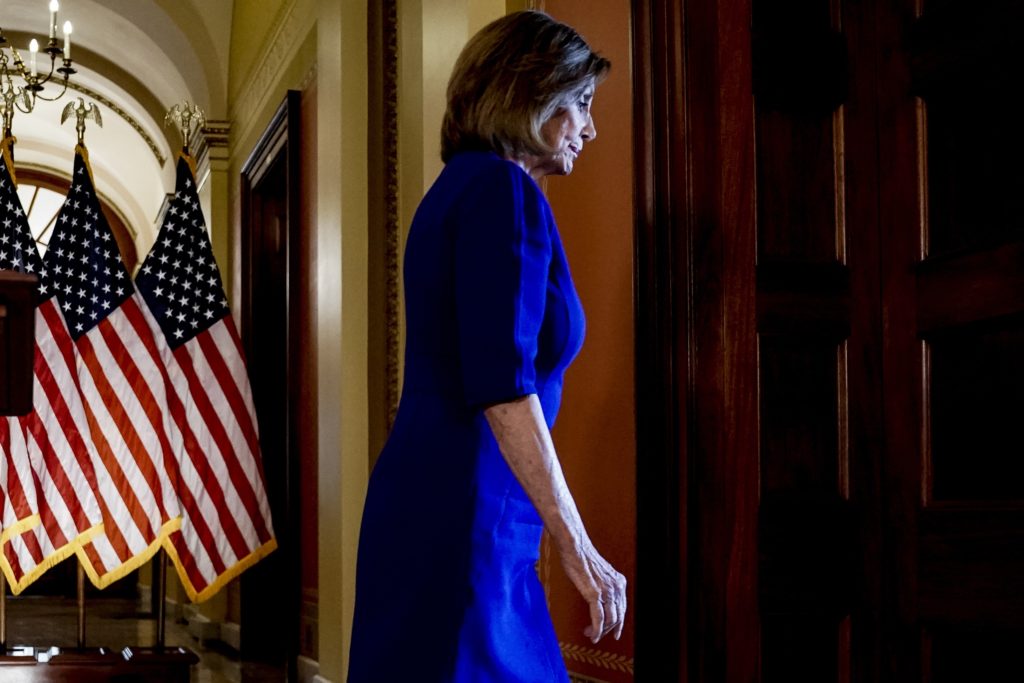 A brewing standoff between the progressive and moderate wings of the majority Democratic party in the U.S. House of Representatives over a drug pricing bill is exposing a power struggle within the caucus and could preview larger ideological battles ahead.

That’s according to reporting Monday from The Intercept‘s Ryan Grim and The American Prospect‘s David Dayen on the potential for a blowout fight between the Congressional Progressive Caucus (CPC) and House Speaker Nancy Pelosi (D-Calif.) and her moderate allies on a drug pricing bill, H.R. 3, the Elijah E. Cummings Lower Drug Costs Now Act.

There’s a huge pharma fight in the House this week. On one side is Sanders, Warren, the Congressional Progressive Caucus (@PramilaJayapal, @MarkPocan and @RoKhanna) & @AOC.

On the other side is Nancy Pelosi and her centrists up for reelection. https://t.co/n1hABmrQkU w @ddayen

According to Grim and Dayen, the CPC is interested in possibly using the caucus’ power in the Rules Committee to block the bill over centrist Democrats’ refusal to bend on the bill—a strategy reminiscent of the behavior of the GOP Freedom Caucus, which built itself into a force on the House floor due to ideological rigidity and a willingness to use procedure as a weapon.

As Bloomberg News reporter Sahil Kapur noted on Twitter, that behavior isn’t known as a CPC tactic—at least not in the past—and that’s had consequences.

“The Progressive Caucus doesn’t usually withhold votes as a bloc to twist Dem leaders’ arm, unlike the GOP’s Freedom Caucus,” said Kapur. “Hence this Congress the balance of power has remained where it usually is in the House Dem caucus: with moderates.”

At issue is the strength and scope of the bill, which at the moment would only give “authority to the government to negotiate lower prices for more than a mere 25 drugs.” Progressives want stronger legislation that would include an amendment from Rep. Pramila Jayapal (D-Wash.) that would prevent drug companies from spiking prices for profit and amendments from Rep. Lloyd Doggett (D-Texas) which would have increased the number of drugs covered in the law and guaranteed the 30 million Americans without health insurance would benefit from the legislation.

The CPC began whipping members against the bill on Friday after it was gutted by Pelosi’s office, setting up Tuesday’s showdown.

As Dayen and Grim explain in their piece, the fight over H.R. 3 is part of an ongoing struggle in the Democratic caucus:

The relative weakness of the bill coming to the House floor makes a mockery of the health care debate unfolding on the presidential campaign trail. While 2020 Democratic hopefuls debate a sweeping, comprehensive reform of the health care system, Democrats in the House are having trouble giving authority to the government to negotiate lower prices for more than a mere 25 drugs. The gap between the two debates could hardly be greater, even though Democrats in the House have a free hand policy-wise: After all, the bill has little chance of passing the Senate and becoming law, so it’s largely a messaging exercise.

All year long, the relationship between the Progressive Caucus and House leadership has simmered behind the scenes, emerging only in fitful moments, like in July when Pelosi resigned to passing a border supplemental spending bill that added few checks to the Trump administration’s cruel caging-of-children policies. The impeachment fight has mostly created unity among House Democrats, against a common enemy’s efforts to abuse the power of the presidency by leveraging foreign aid in order to damage a domestic political opponent. But lingering in the background all year has been the drug-pricing fight.

Grim and Dayen wrote on Monday that the CPC’s decision could have ramifications on how the House decides on policy in the next year and beyond.

“It’s not hyperbole to call the fight a potential bend point in the history of the Democratic Party, with stakes much higher than they appear,” they wrote.

In comment to The Hill, a Pelosi aide sent a veiled warning to the CPC and expressed confidence that the moderates would win the day.

“Representatives Pocan and Jayapal are gravely misreading the situation if they try to stand in the way of the overwhelming hunger for HR3 within the House Democratic Caucus and among progressive Members,” said the aide. “The Lower Drug Costs Now Act will pass next week.”

The stronger legislation has the support of Democratic presidential candidates Sen. Elizabeth Warren (D-Mass.) and Bernie Sanders (I-Vt.). While the pair are unlikely to get the chance to vote on H.R. 3—Senate Majority Leader Mitch McConnell (R-Ky.) is expected to let the legislation die in committee rather than bring it to a vote—a strong bill sends a message to party leaders and the public.

“The Lower Drug Costs Now Act goes after Big Pharma’s greed and makes important investments in community health centers and dental care for those on Medicare,” Sanders tweeted Monday evening. “@USProgressives are fighting to make this bill even stronger, and I support their efforts.”

The Lower Drug Costs Now Act goes after Big Pharma’s greed and makes important investments in community health centers and dental care for those on Medicare. @USProgressives are fighting to make this bill even stronger, and I support their efforts. https://t.co/4M2wXMMzaw

“A bill to fix this shouldn’t work for only some drugs or some people—it should help everyone afford lifesaving treatments,” Warren tweeted Saturday.