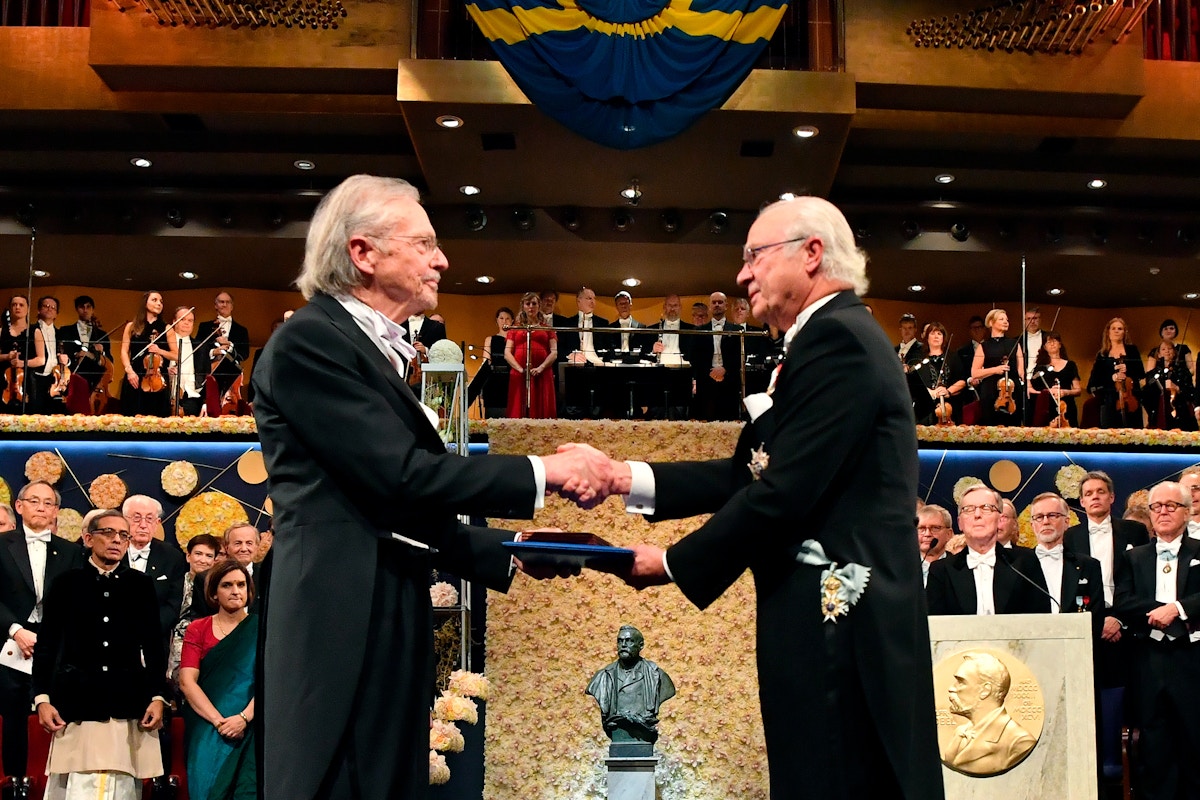 A Nobel Prize that will live in infamy was officially presented today to Peter Handke, who is a genocide denier. There was no sign of protest or discord inside the ornate Concert Hall of Stockholm as King Carl XVI Gustaf handed a gold Nobel medal and certificate to Handke. After the Swedish monarch warmly shook Handke’s hand, and the Austrian-born writer gave a slight bow in return, an orchestra played an extract from Edward Elgar’s “Salut d’Amour.”

The ceremony, on a winter day with little sunlight, came after precisely two months of international controversy. Among Handke’s large body of work are more than a half-dozen books that downplay and deny the wave of atrocities committed by Serb fighters against the Muslims of Bosnia in the 1990s. Handke is unapologetic about his views, which are widely regarded as extremist and are refuted by, among other things, the verdicts of war crimes tribunals in the Hague and elsewhere. At a press conference on Friday, when I asked Handke why he refuses to accept the fact that more than 8,000 Muslim boys and men from Srebrenica were massacred in a genocide by Serbs, he compared my question to a “calligraphy of shit.”

Protests against this award have been unprecedented. The Balkan countries that best know what happened in the war — Bosnia, Turkey, Croatia, Kosovo, and Albania — boycotted the award ceremony today. Two members of the Nobel Committee for Literature have resigned their posts, and one member of the Swedish Academy, which is the final arbiter of who wins the literature prize, refused to attend the ceremony. Additionally, a significant number of well-known journalists who covered the Bosnia war issued a series of blunt posts on Twitter and Instagram in the past 24 hours that reaffirmed the truth of the genocide that Handke denies. Those journalists include Christiane Amanpour of CNN and Samantha Power, the former U.S. ambassador to the United Nations who in the 1990s covered the war as a freelance journalist.

On 7/14/95, I filed a @BostonGlobe story from Sarajevo containing initial reports of massacres in Srebrenica. The world would soon learn the extent of the genocide being committed by Bosnian Serb soldiers, who murdered 8,000 Muslim men & boys. Undeniable fact. #Handke #NobelPrize pic.twitter.com/N91aLzFXwK

Before Handke received his Nobel from the king today, a senior member of the Swedish Academy, Anders Olsson, stood at the podium in white tie and delivered a congratulatory five-minute speech that extolled what he broadly described as Handke’s unique genius — as Olsson put it, his “elucidating gaze and restrained language.” Olsson completely avoided any reference to Handke’s discredited books on Bosnia. They were swept under the rug. At the end of his speech, Olsson even delivered what seemed to be a swipe of defiance against the individuals and nations that regard Handke as a far-right nationalist who is distorting history.

“Dear Peter Handke,” Olsson said, as Handke rose from his red-velvet chair, “I would like to convey the warmest congratulations from the Swedish Academy as I call on you to receive the Nobel Prize for Literature for 2019 from the hands of his majesty the king.”

When the Academy announced its decision on October 10, there was shock and bafflement. Although the Academy has refused to explain itself in any coherent way, it has become clear that its appointed-for-life members either agree with Handke’s political views or don’t believe that the denial of genocide is a sufficiently important matter to stand in the way of receiving a Nobel Prize. While the Swedish Academy has just 18 seats, its decision was today endorsed by a far greater authority — the country’s monarchy. Although Sweden has a generally liberal reputation in the world, the king’s support for Handke serves as a reminder of the royal family’s own dark history; the king’s wife, Queen Sylvia, has been accused of falsifying her father’s close connections to Nazi Germany, which included his membership of the Nazi Party.

At 6 p.m. this evening, more than a thousand protesters gathered at Norrmalmstorg, in central Stockholm, to bear witness to what had happened. There were speeches by, among others, a representative of a group of mothers whose sons were killed in Srebrenica. Handke has mocked them. There was also a professor from the University of Sarajevo, Vahidin Preljevic, who noted the heroic role that Serb war criminals, such as Radovan Karadzic, now play in far-right violence in Europe and elsewhere. “If the Nobel Committee does not understand or if it does not care that it is using this Nobel Prize to serve the nationalist narrative in the Balkans,” Preljevic said, “then it should at least understand how dangerous Handke’s visions are for Europe in particular.”

One of the organizers of the protest, Adnan Mahmutovic, who is a lecturer in Stockholm University’s English department, quoted the 1993 Nobel Prize lecture by Toni Morrison, who warned that “oppressive language does more than represent violence; it is violence.” Mahmutovic then said, referring to Handke’s refusal to acknowledge what war crimes courts have determined in their verdicts, “Let us call things by their right names. … There is something called a crime against humanity. There is something called genocide.”

The protesters included a number of men who had survived the concentration camps where so many others had been killed. One of the survivors, Nijaz Mujkanovic, was holding a book about the Omarska camp that had a picture on its back cover showing prisoners there. He pointed to one of the men in the picture. “That is me,” he said. Why did he have to hold up his book to strangers? To prove, a confounding quarter century later, that the truth was the truth, that what he had lived he had really lived.

There were various signs held aloft during the protest, including one that was particularly chilling: “Denial of the Genocide is the Final Stage of the Genocide.” What that sign meant was clear. After an hour of speeches, when the protest was finished and everyone headed out into the darkness of the long night, there were no illusions. The fighting was over but the war was not.