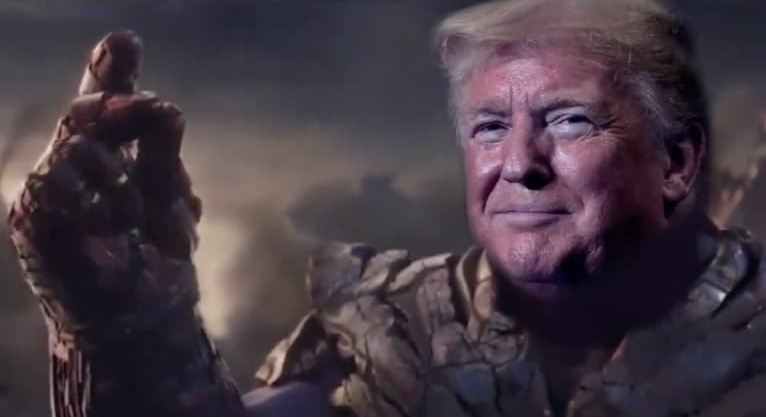 The creator of the Marvel comic book villain Thanos—an intergalactic space warrior who seeks to bring harmony to the universe by annihilating half of all living creatures who live in it—was among those expressing shock and concern after President Donald Trump’s campaign put Trump’s head on the fictional character’s body in a new campaign-style video on Wednesday.

Speaking with the Hollywood Reporter, famed comics artist Jim Starlin said it was both concerning and frightening to see the president embody the character he first created in the 1970s and who serves as the central antagonist in the recent film series, The Avenger’s.

“After my initial feeling of being violated, seeing that pompous fool using my creation to stroke his infantile ego, it finally struck me that the leader of my country and the free world actually enjoys comparing himself to a mass murderer,” Starlin said in a statement to the film industry news outlet. “How sick is that? These are sad and strange times we are going through. Fortunately, all things, even national nightmares, eventually come to an end.”

The ad in question was tweeted Tuesday by the “Trump War Room” on Twitter:

As The Young Turks discussed on their show in response, the ad is not only “weird” for its attempt to counter Democrat’s impeachment efforts, but it sends a terrifying message for the president’s campaign to depict their candidate as the kind of person who snaps his fingers and “trillions of people—trillions of people!—die” as a result. Watch:

Whether familiar with the comic book character or not, many found it just another example of how unhinged and terrifying a real-life character Trump remains.

“The Trump campaign is now comparing the President to Thanos, the genocidal villain from The Avengers,” said Rep. David Cicilline (D-RI). “This is bizarre. Even for them.”

As others also noted of the movie, Cicilline then pointed out that the ad strikingly leaves “out the part where Thanos loses in the end.”