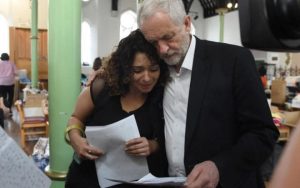 Yesterday’s UK election effectively spells the end of British politics as we know it. All that remains is to just catalogue the events as what is left of the British state and its constituent institutions are rapidly disassembled and the marrow picked clean. The cackling, mop-topped ghoul that is Boris Johnson is the ideal figure to preside over the death of the British State. A return of the madness of King George without the humanizing qualities – Johnson is a leader, much like Donald Trump in America, who embodies all the negative national stereotypes about the English and none of the good ones.

Johnson was matched by an ideal opponent in Jeremy Corbyn: a man hated by much of the Party he represented and plagued by baseless allegation of Anti-Semitism that were spread across the spectrum of the British press for the proceeding three years. The feeble attempts to role some of these back during the election campaign itself were too little, too late, particularly as those newspapers that were Tory aligned were more than happy to double down on the claims. Corbyn though was admittedly weak in challenging these claims, and here we are.

Speaking of weakness, it is no surprise then Jeremy Corbyn is an Arsenal supporter. As a long-suffering follower of Arsenal Football Club myself, I recognize a similar playbook: promising but not quite convincing results in the early rounds of the tournament followed by utter calamity and capitulation during the big match.

To be fair to him, Corbyn was in an impossible position: half the Labour constituents supported Brexit the other half didn’t. He couldn’t go big on Brexit without risking palace revolt from the young people that supported him and made him leader of the Party. He couldn’t go remain without ostracizing the North. He couldn’t purge the Blairites because there were just too many of them. Britain is deep down a reactionary society at this point and Labour has been a fragile coalition for a long while.

But despite the many other issues, including the future of the British welfare state itself and the very idea of society, this election was ostensibly about Brexit.

Part of what makes Brexit so intractable are the number of Labour constituents that are also pro-Brexit. While the referendum was a Tory-led folly, support for it does not divide so neatly. This makes it very hard for Labour to try to advocate for a re-run of the referendum or to roll back the process. Moreover, doing so would basically send the message to British voters that what they have to say doesn’t matter, even if what they voted for in the first place was incredibly unclear. A rerun also doesn’t really look like it would necessarily change the result, which again would place whoever initiates the process in a bad place politically. It is a no-win situation.

Brexit itself is more a function of the long-term economic domination of the rest of Britain by London which has resulted in the decline of British civil society within much of the country. It is for this reason that there is a strong politically Left as well as a Right case for Brexit. These two cases become deeply conflated as a result of gamesmanship by the Cameron government that brought about this whole crisis.

A lot of people after all, did vote for Brexit on non-reactionary grounds with support for Brexit adhering to a regional split between England’s haves and its have-nots. Support for Brexit was higher in the economically depressed North and Midlands and far lower in the affluent South. In other words, the parts of the country that are the winners of globalization versus the regions that are the losers. The referendum then saw the return of the repressed, with some people turning on the London elite and voting to leave for a host reasons.

It is also worth noting that the EU itself is ostensibly an economically Neoliberal project that, while bringing many positive aspects, has also exacerbated existing disparities brought about through economic globalization and the decline of industry in the West. It is also a project that may yet fail, as the late historian Tony Judt projected, with Europe likely to return to the regional/ nationalist competition that characterized much of its history. Indeed, it can be said that the EU was near collapse during the 2008-2010 economic crisis, and many of the nativist reactionary movements that have sprung up or grown in recent years are functionally a product of how that crisis was handled.

We also have to remember that following the collapse of the global financial system during the last economic crisis, Cameron/Osborne initiated a series of austerity policies that were partially mandated by the EU and that cut far deeper than anything Thatcher at her very worst implemented. These cuts have never been reversed and people have seen services that they were dependent on evaporate, the NHS decline in quality and many other bad resultant outcomes.

While these cuts were going on, Britain was being hit by floods of cheap labor from Poland and other parts of Eastern Europe that further drove down wages for the already suffering British industrial workers and those working in trades, helping to fuel the slide towards reactionary xenophobia among parts of the working class. Meanwhile, the financial sector in London was bailed, just like the banks were in the US and on the European continent. Those that ostensibly caused the economic crisis were the ones that largely walked away unscathed and, in some cases, even better off. Working people were who suffered and continue to suffer.

In the end, Brexit has been a mess that was brought about by a combination of brinkmanship by idiots who didn’t realize just how thin and peeling the wallpaper covering the serious foundational faults to the existent economic system really was. Through sheer stupidity, mixed with its close cousin: bravado, Britain is now being forced to come to terms with issues that it has long sought to sweep under the rug. This may drive the splintering of Britain itself, with oil-wealthy Scotland likely to seek to return to Europe, the fate of Northern Ireland up in the air and the specter of a return to ‘the troubles’ lingering over everything.

Many of the issues of multiculturalism in the face of unreconstructed capitalism will remain manifest within British society, and the economically depressed north will remain firmly at odds with the affluent south, Really, we are almost seeing a possible setup for a replay of the English Civil War.

Corbyn offered up a perfectly reasonable compromise solution to Brexit in a second referendum that included the option to remain or a negotiated leave policy that would include a customs union with Europe. Sadly, contemporary Britain is a deeply reactionary place and these are not reasonable times. A negotiated customs union included break was probably best of a number of bad options, but even this liked seemed a fairly dismal outcome. Apart from Corbyn’s immediate circle of influence, hence why no one in Parliament seems to be much interested in pursuing this outcome either.

Corbyn needed the help of some real throat-slitters like Alistair Campbell or Peter Mendelson to help him. But those people tend to be Blairites for a reason: they are Center-Right opportunists, not ideological Leftists. They would always oppose Corbynism. The Left isn’t savage that way and that is part of what frequently leads to its undoing. It rarely has a sniff at power and when it does, it is either undone fast or things go terribly wrong before they can really get started. The propaganda model leveraged against it is just too strong and the forced of darkness are always just at the doorstep. No matter now, Corbyn is already gone.

It may be that Western Democracy, replete with its trappings of Neoliberal capitalism, is rotten to its core and apparently need a full system collapse before anything can change.

Where Labour goes from here, let alone Britain as a whole goes from there, is terrible to contemplate. I fully expect the Blairites to rally and drive the already Lovecraftian political dialogue of the British state even further into the abyss. We also already know, from leaked documents, that Johnson plans to partially privatize the NHS with the jackals of the American health care industry salivating at the red meat being tossed to them. Of course, the keys story when the details of this were leaked was that the leak was all a Russian plot, while no one actually disputed the veracity of the documents. Such is the way with Western Democracy replete with its dark alliance to Neoliberal Capitalism: we will go far down the road of conspiratorial folly long before we will acknowledge our own ideological failings.

Darks days ahead then, and it is impossible to shake the feeling that it could be no other way. The John Bull faction of the British public has won for now and perhaps won permanently. Pity the poor, pity the immigrant and pity those with blood, rather than venom in their veins. Make no mistake though, this is a hell made by the indelible influence of capital over humanism.

Alex Deley is an urban planner, writer, record collector and musician. He received his MS in Urban and Regional Planning from the University of Wisconsin-Madison and has worked in the US, France, and in West Africa. He can be reached at: alex.deley@gmail.com. Read other articles by Alexander, or visit Alexander’s website.
Print