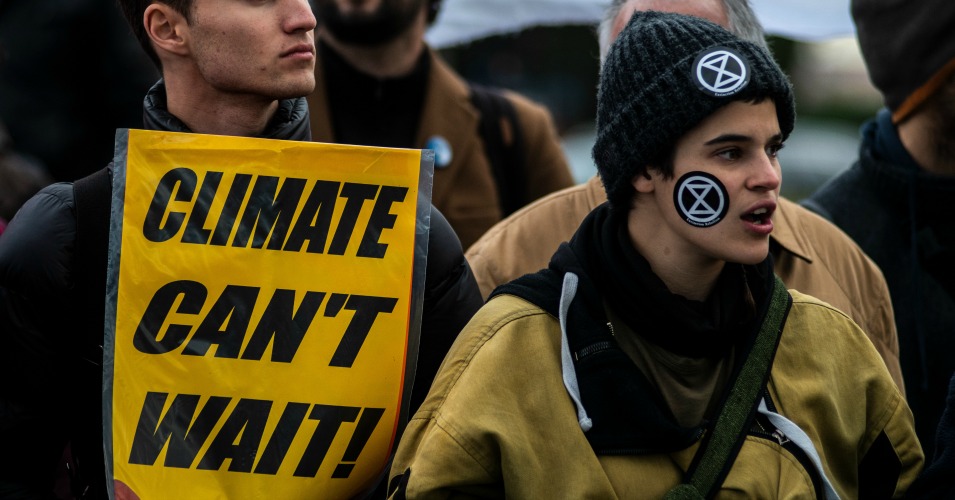 After the COP 25 climate talks on the Paris climate agreement went into overtime Friday night amid a stalled agreement on wealthy countries’ contributions to greatly reducing their climate-warming carbon emissions, civil society groups and climate scientists were shocked by the weak language that emerged from the late-night talks on Saturday.

The latest text includes an “invitation” for countries to communicate their mid-term and long-term climate plans, and the majority of delegations, which attempted to push countries including the U.S. towards ambitious climate targets, were unable Saturday to sway the U.S. away from language regarding carbon markets.

Plenary is about to start at #Cop25. The latest text has been released this morning and all the language on ambition has been scrapped. Countries are now “invited” to “communicate” by 2020 their mid and long-term climate plans. No language to “update” or “enhance”. pic.twitter.com/GZ5WgOBGOl

Nearly 100 civil society organizations on Saturday released a joint statement condemning the U.S., Australia, the E.U., and other wealthy countries that emit much of the carbon that’s warming the planet, for insisting on a deal “only for the corporate elites, while damning people and the planet.”

As of Saturday, civil society groups including the Center for Biological Diversity, Oil Change International, and Friends of the Earth said, the deal that had been hammered out by the parties included an agenda brought by big polluters “straight to the halls of the U.N.” with the help of countries “historically most responsible for the climate crisis.”

“From the Amazon to the Arctic, our world is on fire. Allowing expansion of coal, oil and gas production at this moment of history is throwing gasoline on the fire.” —70+ civil society organizations

At the behest of fossil fuel corporations, they said, wealthy countries are insisting on using carbon markets to “offset” instead of cut emissions, and  “nature based solutions,” which the civil society groups said is likely a euphemism for “large scale biomass burning, carbon storage technologies, the commodification of the ocean”—which will contribute to deforestation and displace food production.

The U.S. is also reportedly still objecting to provisions that would hold it liable for the destruction the climate crisis has already wreaked in island nations.

The deal as it stands would “condemn those on the frontlines of the climate crisis, while hiding the crimes of polluters,” said the groups. “And it would lead to increased inequality with no increase in ambition, no real emissions reductions, and no pathway to 1.5 [degrees Celsius above pre-industrial levels.]”

The COP 25 summit approached its end after demonstrators staged sit-ins and other protests, with security officials barring about 200 campaigners from the talks after they staged a sit-in. The demonstrators followed in the footsteps of the global climate strike which have drawn millions in the past year.

“I’ve been attending these climate negotiations since they first started in 1991,” Alden Meyer, director of strategy for the Union of Concerned Scientists, told the BBC. “But never have I seen the almost total disconnect we’ve seen here at COP25 in Madrid between what the science requires and the people of the world demand, and what the climate negotiations are delivering in terms of meaningful action.”

Other critics on social media wrote that the talks had descended into “disarray,” with Rep. Alexandria Ocasio-Cortez (D-N.Y.) calling them an “utter failure.”

Today #COP25 is ending in a state of disarray. The requirement to increase ambition & ramp up emissions reduction targets in 2020 – a critical piece of the Paris Agreement – has been removed. Wealthy countries have blocked talks about loss & damage for climate-impacted countries. https://t.co/2kvjVsHzWz

An utter failure.#COP25 & conferences like it are intended to be actual negotiations to urgently drawdown global carbon emissions – not cocktail parties to make politicians feel better about themselves as they squash dissent & sell off our futures to fossil fuel interests. https://t.co/cw1B1dtS53

The only thing more disastrous than the state of UN climate negotiations at #COP25 is the state of the global climate. pic.twitter.com/dpf7XQHAHx

The entire purpose of COP25 was for nations to scale up their own ambitions and raise the decarbonization targets established under Paris. After an extra day of contentious negotiation, all language referring to that goal has been stripped from the resolution. https://t.co/OFJvE67K0i

“This is nothing less than a breakdown in the Paris Agreement. This is not climate leadership, this is a betrayal of humanity and future generations,” tweeted climate scientist Eric Holthaus.

“What’s happening today at COP 25 is a clear and present threat to civilization itself,” Holthaus added. “The Trump administration and its fossil fuel allies around the world have sabotaged the Paris Agreement—the only global treaty we have to fight climate change. This is a betrayal of humanity.”

Catherine Abreu of Climate Action Network Canada was among those who spoke at the People’s Closing Plenary Saturday afternoon, where people from marginalized and frontline groups decried the breakdown of the conference and the real-world consequences it will have.

“For so many people gripped by devastating floods, fires, and storms, time is up,” Abreu said. “And instead of helping them, rich countries hold on to your dollars and hold up loss and damage. Public mobilizations are swamping the streets. The status quo you are working so stubbornly to protect is not working for people or the planet.”

Harjeet Singh, of ActionAid International lambasted wealthy countries including the U.S. for fighting to avoid liability for helping to accelerate the climate crisis.

“Developing countries came to this climate conference with the expectation that the people who have lost their crops to drought, or who have lost their homes to cyclones, will finally get help from the UN system,” said Singh. “Instead, they have faced bullying, arm-twisting and blackmail. Rich countries most responsible for the crisis have refused to provide a single penny of new money to support communities to recover from the devastation caused by increasingly frequent and severe climate disasters.”

The civil society groups’ joint statement noted that in the final hours of the summit, “it is not too late for developing countries to stand strong, to resolutely refuse the agenda of polluters.”

“From the Amazon to the Arctic, our world is on fire,” the statement read. “Allowing expansion of coal, oil and gas production at this moment of history is throwing gasoline on the fire.”