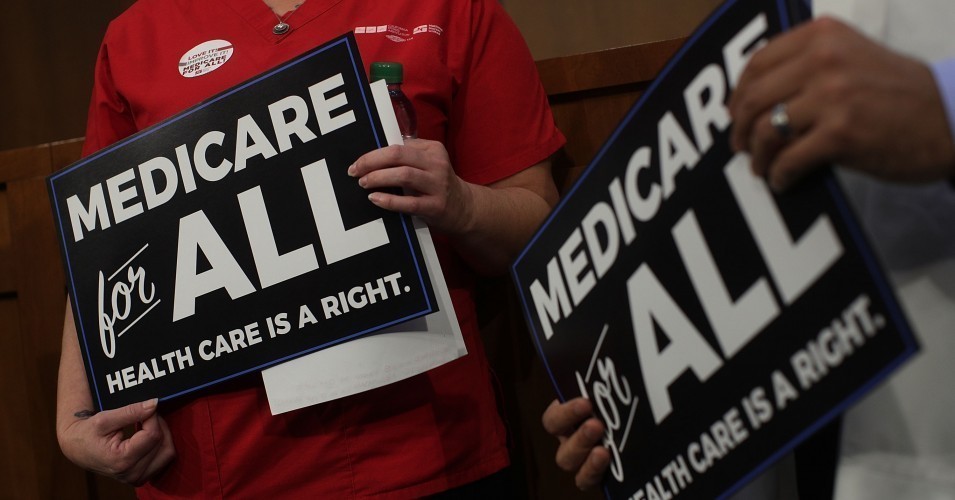 For decades, tobacco companies conspired to sow doubt about the harms of smoking. It was a strategy designed to protect profits by fending off regulation. And it worked; while lawmakers dithered, profits soared and millions more tobacco users died.

The fossil fuel industry followed suit. Long after its own scientists said global warming was happening, the industry paid right-wing think tanks millions of dollars to issue reports and op-eds that denied it. Again, the purpose was to stall regulation that could hurt profits. Now we’re facing a climate crisis of immense proportions.

Today, the health insurance industry is trying to mislead the American people about proposals to create a Medicare for All, single-payer health care system. It’s the same story: powerful corporations distort public discourse to prevent change, thereby hoping to protect profits and impose the costs of a broken system on everyone else.

As reported a year ago by Lee Fang and Nick Surgey in The Intercept, the health insurance industry’s propaganda efforts are coordinated by the Partnership for America’s Health Care Future. Fang and Surgey describe how the Partnership’s 2020 campaign aims to quash Medicare for All proposals through lobbying, online advertising, and manipulating commercial media.

As testament to its spending power, the Partnership has succeeded in getting its talking points into the mainstream: Medicare for All will end employer-based coverage! It will require tax increases! It will mean government control of health care!

These talking points are crafted by high-priced public relations firms and then fed to candidates, legislators, reporters, columnists and other opinion leaders. Occasionally the process comes to light. As the Washington Post recently reported, op-eds published by political officials (or their aides) in Montana and Ohio were ghostwritten by industry lobbyists.

On a level democratic playing field, the industry’s fear mongering would gain little traction, as its talking points are easily refuted.

Yes, employer-based health insurance will end, but it will be replaced by a single-payer system that doesn’t depend on what an employer is willing or able to provide. A single-payer system will cover people no matter where, or if, they’re employed. A significant side benefit is that people will gain power vis-à-vis their employers, because they won’t feel compelled to stay in bad jobs for fear of losing coverage.

Yes, Medicare for All might require higher taxes, but with the end of premiums, deductibles, co-pays, and claims denials, most people will experience a net economic gain. Instead of insurance companies and their shareholders coming out ahead, everyone else will.

No, Medicare for All doesn’t mean government control of what happens between people and their doctors. The current system is what restricts freedom. We see this when insurance companies overrule doctors and force people to seek care from in-network providers. Medicare for All would mean freedom for doctors to provide the treatment they deem best, as well as freedom for people to choose the best health care providers they can find.

The good news, according to 2019 polling data from the Kaiser Family Foundation, is that, despite the insurance industry’s efforts to kill Medicare for All, a majority of Americans favor such a program. But the margin is slim, and support depends on how well people understand what Medicare for All would do and what it wouldn’t do. Better understanding leads to greater support.

Back in the day, the ads that worked best to deter teen smoking were not those that focused on health. The most effective ads were those that showed tobacco company executives scheming behind closed doors to sell a product they knew was deadly and addictive. When people know they’re being played, they resist. Which suggests that building public support for Medicare for All depends, in part, on continuing to expose the health insurance industry’s efforts to mislead and misinform.

Americans today pay more for health care than any other people in the world. Yet in study after study, we rank last among developed nations in measures of access, quality, and outcomes. Countries with a national health service or a national health insurance system leave us in the dust, sicker and dying earlier.

One reason we’re in this fix is that we pay not only for health care but also to enrich the executives and shareholders of health insurance companies. We also pay more because providers pass along the overhead costs of dealing with hundreds of private insurance companies. Paying these extra costs does nothing to improve our national health status.

Health insurance companies try to cloud the debate and inspire fear because they have a lot to lose. But this time we shouldn’t be fooled. We need to stop being daunted by manufactured doubt and get on with creating a health care system that gives us our money’s worth and works for everyone.