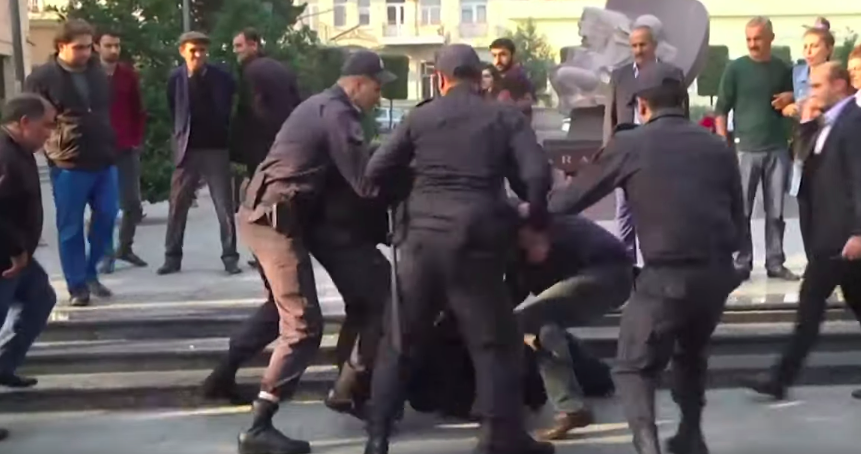 The use of excessive force and detentions by Baku police made these events into a serious public spectacle – all of which was available online. But the aftermath of these events confirmed once again Azerbaijan’s internet dependency as a weak spot.

For example, Gultekin Hajibeyli, a former MP-turned-opposition activist who attended the 19 October protest, relies heavily on Facebook for much of her work. By the end of October 2019, Hajibeyli’s page had 200,000 followers – this is where she keeps her supporters up to date about her work, speaking engagements and interviews. On 9 November, Hajibeyli’s Facebook page was hacked. She lost all of her archive, and some 130,000 followers were removed. The attacker used a Facebook profile of another activist and a member of the Popular Front party, Aliyev Hijran. Speaking to openDemocracy, Hijran said that he was unaware his profile had been hacked.

Similarly on 21 October, opposition movement D18 reported that its Facebook page had been hacked by unknown attackers. The administrators realised they were no longer in control of the page, but they were unable to prevent the loss of followers. In the 20 minutes the page was taken over, the group lost over 7,000 likes. The same day, one of the founders of the movement, Ruslan Izzetli, reported his personal Facebook page was being hacked. Izzetli was able to retrieve control of his page, but it’s worth noting that it was while his page was taken over that the D18 page was hacked. Izzetli and other members of D18 believe that they were attacked as a result of a recent Facebook post calling for Azerbaijan’s current Minister of Internal Affairs, Vilayet Eyvazov, to resign.

Other activists and rights defenders have reported numerous attempts and cases of hacked Facebook profiles. Online news sites Arqument.az and Anaxeber.info reported that their websites had been blocked by Facebook without prior notification, and they were thus unable to share links from these websites on the platform.

Last year, Facebook unveiled its rules that govern what can and cannot go on its platform. “If your photo, video or post is removed for violating Facebook’s rules, you will be given the option to Request Review,” the rules state. “Appeals will be conducted by a ‘community operations’ team within 24 hours. If Facebook determines it made a mistake removing content, it will be restored.”

Several Facebook users in Azerbaijan interviewed for this story state that they did not receive any notification or an explanation from Facebook as to why their pages or content were blocked or removed. Hebib Muntezir, social media manager at Berlin-based independent news outlet Meydan TV, said he was not notified when Facebook started removing Meydan TV’s videos and photographs from protests in Baku on 19-20 October.