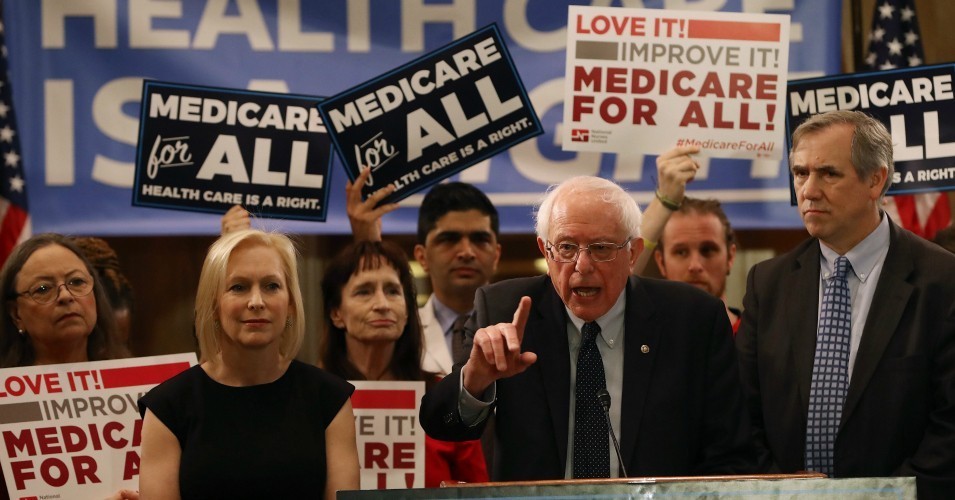 When U.S. Sen. Elizabeth Warren rolled out details of her Medicare for All plan at the beginning of November, she didn’t merely answer her fellow Democratic presidential contenders, who were clamoring to know how she proposed to pay for it. Warren also handed a few pages from her playbook to her plan’s real opposition, the Partnership for America’s Health Care Future, a consortium of sometimes disparate health-industry heavyweights, from insurance companies to private hospitals to Big Pharma.

Since 2018, the deeply funded and well organized Partnership, which is headed by Lauren Crawford Shaver, a former Hillary Clinton presidential campaign aide, has spearheaded a wide-ranging media and lobbying effort to defeat any movement toward either a single-payer or public-option health-care system. (Under single-payer, the government would provide health insurance for every person in the U.S.; a public option means adding a federally based plan to compete with private insurers.) Its methodology includes mass media scare ads, “earned media” editorials, directed think-tank studies and inside-the-Beltway persuasion.

“They’ve really powered ahead. We’re seeing them ramp up more and more,” said Eagan Kemp, a health policy advocate with Public Citizen. “And they are putting effective pressure on the polling [data] regarding Medicare for All” by, among other things, spending vast amounts of money across media platforms to raise concerns about tax increases or long wait times to see a doctor.

The health care industry expects any Democratic candidate that emerges in 2020 to be a threat to the existing system, and it is pushing aggressively against that threat – both publicly and privately. But although the industry’s current war against universal health care is one of  21st-century America’s biggest political fights, its unforgiving rhetoric and tactics are rooted in legislative conflicts that stretch into the distant past.

Going back to the tortured path that eventually led to the creation of Medicare in 1965, medical industry giants have moved to defeat or delay almost every development they viewed as an incursion on their profits and prerogatives. That includes the Clinton administration’s attempted reforms in the 1990s and the Affordable Care Act, which, under intense lobbying, scrapped a heavily debated public option on its way to becoming law under President Barack Obama.

“It’s a long period of consistency not only in opposition, but also in messaging,” said Anthony Wright, executive director of Health Access, a California-based consumer advocacy coalition. “It’s striking how they’ve come out not against a specific plan, but against the whole range of plans.”

But with opinion polls indicating that a majority of Americans favor either full public health care or a public option, private insurers may now be facing an existential crisis. And while House Speaker Nancy Pelosi has expressed doubts about the political viability of a straight Medicare for All proposal, two of the leading candidates for her party’s nomination, Warren and Sen. Bernie Sanders, are pushing for exactly that.

“Today, in 2019, in the United States of America, the wealthiest nation in the history of the world, inadequate health coverage is crushing the finances and ruining the lives of tens of millions of American families,” Warren wrote in the introduction to her proposal.

Following the 2010 passage of the ACA, with its legal requirements for individual coverage, the number of uninsured Americans began to fall. But those figures were on the rise again in 2018. And when adding those who are considered underinsured (meaning they pay out-of-pocket or deductible costs that equal five to 10 percent of their income), some 87 million adults are affected, with the poorest Americans faring the worst.

Despite that, recent years have been extremely lucrative for the private health industry. In 2017, health-care spending reached $3.5 trillion, or nearly 18 percent of the gross domestic product. Private insurance alone employed at least half a million people and accounted for more than $1.2 trillion of that spending.

The median annual compensation for a healthcare CEO in America is $16.1 million, according to a report by the Associated Press and Equilar, an executive data firm — the highest median CEO salary from any sector the firm studied. Meanwhile, an average family of four with employer-sponsored health insurance still spent more than $12,000 of its own money in contributions and out-of-pocket costs in 2018 – money such families often can ill afford to spend.

Add it up and conditions become ripe for a campaign issue. Beyond Warren and Sanders are a host of Democratic candidates – Biden, Buttigieg, Klobuchar, Booker, Yang – whose plans favor the inclusion of a public option or some version of the so-called Medicare for All Who Want It proposal (under which currently uninsured Americans would be automatically enrolled in government-sponsored health care, with others allowed to opt in). The broad idea is to provide a cost competitor to private insurers, with the government setting the price it will pay for certain types of care and prescriptions – an alarming notion to those profiting handsomely from the present setup.

“Whether you call it public option or plain rate-setting, I think there’s a concern there,” Wright said of the health insurance industry. “They’re opposed to all of it, but especially anything that sets rates or even comes close to that. And I think they know that there are solutions now that don’t have the same obstacles [as Medicare For All] in the new political environment.”

Still, it was the prospect of Sanders’ Senate proposal gaining steam that originally prompted the formation of the Partnership for America’s Health Care Future.

According to internal documents obtained last year by The Intercept, the Partnership’s primary goal is to redirect the conversation, both nationally and around Capitol Hill, away from single-payer and toward the idea of building on the current system, which is an often-baffling combination of employer-sponsored and privately purchased health insurance, plus government programs for those over 65 (Medicare), the poor (Medicaid), military veterans and members of Congress.

One of the group’s principal weapons is Facebook, where the Partnership has already paid for thousands of short-duration ads, including one that attacked Rep. Lori Trahan (D-Mass.) after Trahan became a co-sponsor of Medicare for All. (Lobbyists for the group had previously visited Trahan’s office and came away believing she favored building upon the Affordable Care Act.)

More often, the Facebook campaign (the Partnership buys Google ads, too) is general in nature, built on the theme that Medicare for All will rip apart the American system and lead to chaos. One of the current opposition groups to Medicare for All is the Coalition Against Socialized Medicine, which has close ties to several Koch brothers-funded groups and whose very name harks back to the postwar campaigns waged by the private health industry to forestall change.

When Harry Truman twice proposed national health insurance for every citizen, in 1945 and again in 1949, he met the full weight of the AMA, which launched a then-record lobbying campaign against the idea (among other things, the plan was labeled “un-American”) and worked closely with conservatives in Congress to kill it. In the early 1960s, as John F. Kennedy put the office of the presidency behind the idea of Medicare, the same forces pushed back, decrying the notion of governmental involvement and “socialized medicine” in the doctor-patient relationship.

Through the Clinton years and up to the adoption of ACA, industry opposition had remained static, but its treasure chest large. As of 2017, more than 75 percent of the 3,300 lobbyists working in the health-care industry represented either pharmaceutical, hospital or insurance interests. In 2017 alone, PhRMA took in $456 million in revenue and spent almost $200 million on lobbying and advertising.

The Partnership is bipartisan, in that it freely uses lobbying and consulting firms with Democratic ties, such as Forbes-Tate (founded in part by former Clinton administration officials) and Blue Engine Message & Media (founded by former campaign aides to President Obama). Crawford Shaver, the former Hillary Clinton campaign aide who now directs the Partnership, is a partner at Forbes-Tate.

“Whether it’s Medicare for All, Medicare buy-in or single-payer, such proposals would dramatically reduce the amounts paid to doctors and hospitals, resulting in health care providers being forced to limit the care they provide,” Crawford Shaver wrote in an op-ed published in The Hill earlier this year. Partnership co-founder PhRMA, meanwhile, took over ad sponsorship of Politico’s health newsletter, Pulse, for most of 2018, strategically placing “messages” in breaks between health-related stories.

Democratic presidential candidates know they can expect more of the same as the race for the 2020 party nomination heats up.

Indeed, in a May Buzzfeed editorial, Bernie Sanders took direct aim at the Partnership, calling it a “front group” for the private health insurance industry. “In reality,” Sanders wrote, “this is a partnership to protect health industry profits.”

It is also a coalition, said Public Citizen’s Eagan Kemp, that has determined “that any loss is a loss they’re not willing to take.” No retreat, no cooperation.

That rigid view may be one of the primary reasons the Partnership lost one of its co-founders this past summer, when the AMA announced it was no longer affiliated with the group.

The AMA said it remains opposed to Medicare for All. But in June, a resolution to reverse the organization’s opposition to single-payer was defeated in its policy-setting House of Delegates by a surprisingly narrow margin, and its national gathering was met by demonstrations that included doctors, nurses and medical students urging it to extend Medicare coverage to all Americans.

Today, however, it is the next election cycle that matters (“We are all focused on 2020,” Forbes-Tate’s Crawford Shaver said in a recent podcast), and the lobbying money reflects that reality. Between the first quarter of 2018 and the first quarter of 2019, the number of firms hiring lobbyists to work on Medicare for All increased nearly sevenfold – almost all of them attempting to defeat the idea.

When Bernie Sanders campaigned on his plan in 2016, he was seen as a disruptor but not necessarily a threat. That much, very clearly, has changed.

“The more that this issue has gained visibility, the more they want to counter the messaging,” said Health Access director Wright. The concept of health care as a human right is now in the political mainstream, and if it’s in the mainstream, then it has a chance to breathe – something the U.S. private health insurance industry has no interest in seeing happen.