The Washington Post‘s function as a bullhorn for centrist Democrats continues full force this week, with an article (12/11/19) headlined, “As Democrats Trade Barbs on Business Ties, Some Worry Purity Tests Are Going Too Far” (or, in the print edition, “Democrats’ Purity Tests Over Business Ties Could Backfire: Some Observers Worry That Voters Will Perceive a War on Prosperity”). It’s a greatest-hits of an election piece, rounding up a posse of centrist sources to accuse progressive candidates of imposing “purity tests,” and argue that a leftist turn by Democrats will hurt the party. 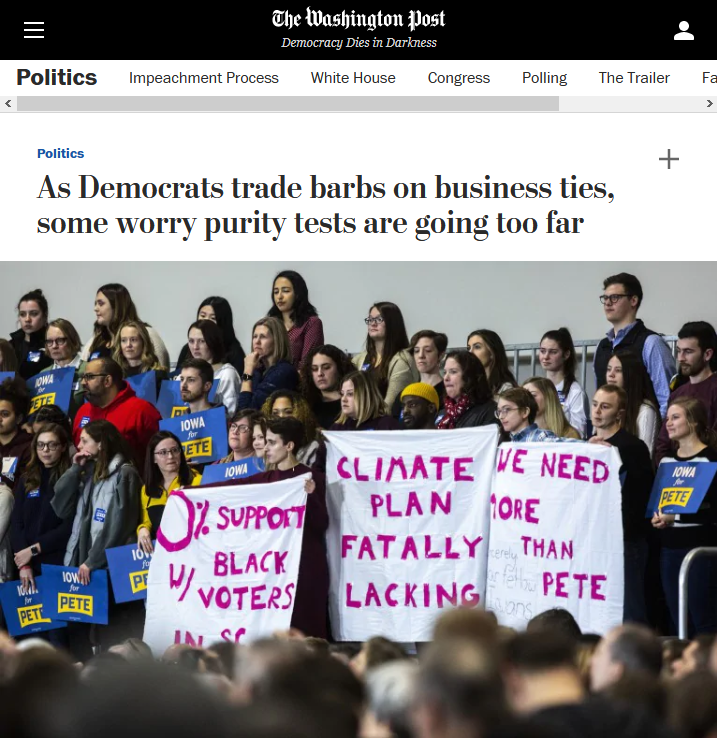 The Washington Post (12/11/19) says “many Democrats…fret that an increasingly aggressive tone could ultimately hurt the party, potentially creating litmus tests and exposing candidates to Republican accusations of a war on prosperity.”

The article focuses on the Pete Buttigieg/Elizabeth Warren clash over transparency and ties to corporate America. This “growing battle” is “worrying some in the party that an escalating series of purity tests could turn off voters and convey an exaggerated disdain for business,” Sean Sullivan and Matt Viser report.

As usual, “some in the party” is corporate media code for “centrist Democrats.” Aside from the current candidates and their spokespeople, the piece seeks out almost exclusively the right wing of the party to judge the import and fallout from this scrutiny over corporate coziness. Sources include a fundraiser for Buttigieg and Biden, another Buttigieg backer, two Booker supporters who won House seats in swing New Jersey districts last year, former candidate Tim Ryan (who told the Post, “You can’t be hostile to business, to free enterprise”), and centrist former Sen. Heidi Heitkamp. Former Chicago mayor and Obama chief of staff Rahm Emanuel, the epitome of move-to-the-right-Democratism, was prominently featured.

They balance this barrage with one “liberal Democrat,” a strategist who has donated to Warren.

But it’s not just the centrist sources that do the spinning. Sullivan and Viser themselves report that “Buttigieg was being targeted by protesters labeling him ‘Wall Street Pete,’ though the bulk of his career has been in the military and city government.” Well, then, those protesters must be loony lefties! Except that Buttigieg has raked in more Wall Street money than any other Democratic candidate.

(The Post might also have mentioned the incident that went viral earlier in the week in which a young voter asked Buttigieg, “I wanted to ask if you think that taking big money out of politics includes not taking money off of billionaires and closed-door fundraisers.” Buttigieg’s curt reply: “No.”) 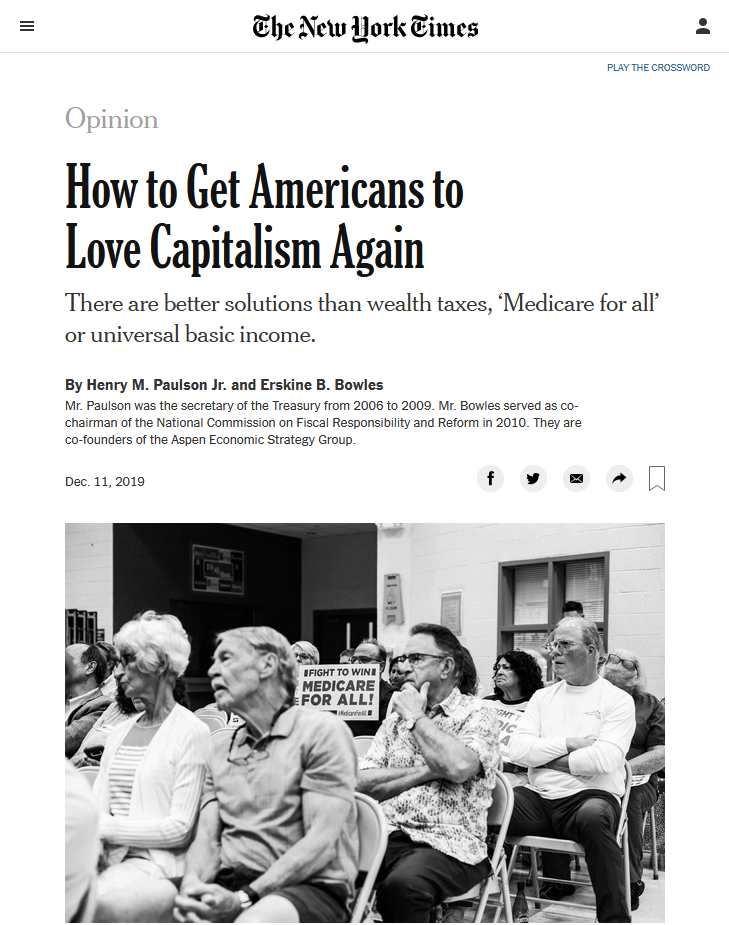 The New York Times (12/11/19) is alarmed as “more Americans become disillusioned with the capitalist system that has made upward mobility a pillar of the country’s identity.”

The problem, according to “many,” is that “the party needs to do a better job of outlining an economic agenda that can break through at a moment when the labor market is strong.” But for too many voters, the labor market doesn’t feel so “strong” (FAIR.org, 11/19/19)—and for them, the Post’s notion of a “war on prosperity” must seem rather ironic.

Sanders and Warren are perhaps the only ones outlining a breakthrough economic agenda—with Medicare for All, a wealth tax and a $15 minimum wage, among other ideas—but that’s not the agenda the Post and their “many” friends are looking for.

Instead, you’ll find the centrist answer in this week’s New York Times opinion section (12/11/19), where Henry Paulson and Erskine Bowles bash those leftist plans and explain that we “can get America to love capitalism again” by “aggressively invest[ing] in our human capital,” “expanding the earned-income tax credit” and “restoring the sanity of our fiscal position” by cutting Social Security. Can’t you just hear the crowds chanting those words now?