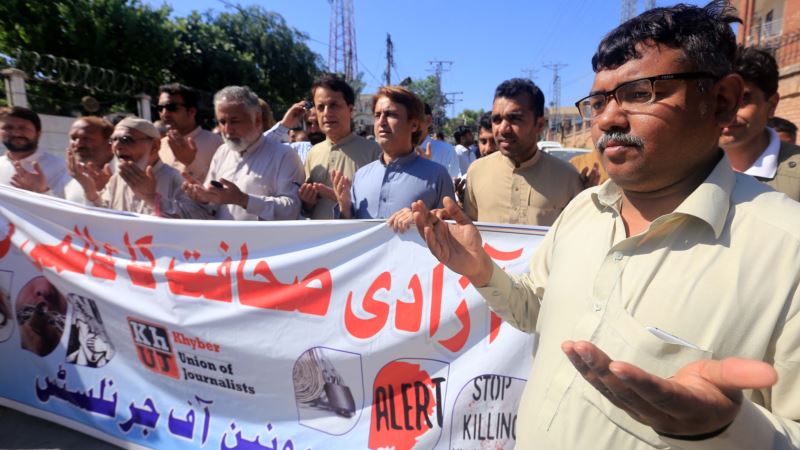 Reporters Without Borders (RSF) says journalism remains a “dangerous profession,” with 49 journalists killed this year, 389 currently imprisoned, and 57 others being held hostage.

According to the Paris-based media freedom watchdog’s annual worldwide roundup of deadly violence and abusive treatment against journalists, released on December 17, the number of journalists killed in 2019 is “at its lowest in 16 years.”

The “historically low” figure, compared with an annual average of 80 journalists killed during the past two decades, is mainly the result of a fall in the number of journalists and other media professionals killed in war zones, RSF said.

A total of 17 journalists were killed while covering conflicts in Syria (10), Afghanistan (5), and Yemen (2) — compared with 34 last year.

However, the number of those killed in countries “at peace” remained as high as in previous years, with 10 killed in Mexico alone.

“More and more journalists are being deliberately murdered in connection with their work in democratic countries, which poses a real challenge for the democracies where these journalists live and work,” RSF Secretary-General Christophe Deloire warned.

While fewer journalists were killed, more ended up behind bars.

A total of 389 journalists were held in connection with the provision of news and information at the start of December — 12 percent more than the number held on the same date last year.

More than 40 percent of them are citizen journalists seeking to disseminate independent information via social networks.

“Having intensified its crackdown on the Uyghur minority, China alone holds a third of the worldwide total of arbitrarily detained journalists,” the report said.

“Islamic State and the various other radical armed groups mainly use their hostages as bargaining chips or for propaganda purposes,” RSF said.

Meanwhile, Yemen’s Huthi rebels and the Russia-backed separatists in eastern Ukraine “also treat their hostages as prisoners guilty of crimes for which they must be severely punished.”