Vladimir: Let us not waste time in idle discourse! Let us do something, while we have the chance! It is not every day that we are needed. Not indeed that we personally are needed. Others would meet the case equally well, if not better. To all mankind they were addressed, those cries for help still ringing in our ears! But at this place, at this moment of time, all mankind is us, whether we like it or not. Let us make the most of it, before it is too late!

Agate Keller: Don’t Wait for Lefty! He might never come! 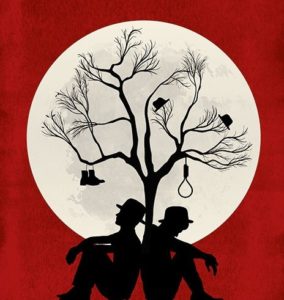 Irish playwright Samuel Beckett’s Waiting for Godot (The Irish pronunciation is GOD-oh) is recognized as the most significant play of the 20th Century by the most influential playwright of the period. Beckett (1906-1989) wrote the play in 1948 and it’s still the most frequently produced drama around the world some 70 years after its premier in Paris in 1952. Likewise, a Google search reveals that critics remain engaged in the flourishing cottage industry of passionate debate over the play’s meaning. English language versions appeared in London in 1955 and on Broadway in 1956 and some of our greatest actors have performed it, including Patrick Stewart, Bill Irwin, Ian McKellan, E.G Marshall, F. Murray Abramson, Geoffrey Rush, Nathan Lane, Robin Williams and Steve Martin.

I first encountered the play in a first-year undergraduate course on Modern Drama (my minor) and if a liberal arts education is sometimes wasted on the young, I’m an example. I’d never heard of Beckett or Godot and even on a second reading I found the play opaque, totally incomprehensible. Unable to formulate a critical judgement, I remained silent and took notes on the teacher’s interpretation — in all likelihood a conventional Christian take as it was a very conservative Lutheran college. Further, and it’s strictly a guess, my professor and hence his students may have been influenced and delimited by New Criticism, a school of thought which dictated that only the text lent itself to interpretation and excluded the author’s background, context, possible intent and so forth.

This cringe-worthy memory was recently brought to mind by reading the Godot quote (above) in Benjamin Moser’s new biography of Susan Sontag where he describes how she staged Waiting for Godot in Sarajevo while it was under brutal attack by Serbian nationalists in 1993. That, in turn, prompted me to do some research and view an online version of the play in an attempt to further reduce another glaring deficit on my cultural capital ledger. My conceit is that what follows may be useful for others in rethinking both the play and its meaning for today.

Absent a plot, action and time, the play resists a tersely cogent summary but here’s my layperson’s idiosyncratic, some will say caricatured synopsis. After the opening line “Nothing to be done” the audience watches a tragicomedy in two acts about Vladimir and Estragon ( “Didi” and “Gogo” in the performed version), two bedraggled vagabonds waiting in the middle of nowhere for the mysterious Godot to save them. They occupy an almost barren landscape with a country road, single boulder, the sky and a leafless tree which sprouts a few leaves by Act II. To kill time they engage in broad slapstick humor, nostalgic rambling, juggling their bowler hats, halting speeches, and bickering. There are also glimpses of exquisite tenderness between Gogo and Didi, the childish nicknames the pair have adopted for one another.

In Act I, they’re paid an abbreviated visit by Pozzo, a local landowner and his slave, Lucky, who’s tethered to rope and whipped. His fate is to be sold at the fair. A boy appears with the message that Godot won’t be arriving that day “but surely tomorrow.” Didi and Gogo momentarily contemplate suicide by hanging themselves from the tree but decide to continue waiting. In Act II, a greatly diminished Pozzo (now blind) and Lucky (mute and dying) reappear and Didi cries out that they should help them. They do nothing. The boy returns with the same message, suicide is again put off and the wait continues. Spoiler: Godot never shows up. At that point, Vladimir says “Well, shall we go?” To which Estragon replies “Yes, let’s go,” but as the curtain falls, the friends remain stationary. As a reviewer in the Irish Times quipped in 1956, this is a play in which “Nothing happens, twice.”

In a cabdriver’s union meeting hall, the strike committee is deciding whether to hit the pavement while a corrupt, red-baiting union boss tries to talk them out of it. His hectoring implicitly supports FDR’s effort to save capitalism from the pinkos. Before making a decision the cabbies want to hear from Lefty Costello, their pro-strike faction leader who is nowhere to be found. After more impassioned dialogue and more waiting (in one sequence a secretary voices kind words for The Communist Manifesto), an agitated member shouts “Don’t wait for Lefty! He might never come!” They continue waiting. Finally, a union member arrives with the news that Lefty has been found dead with a bullet in his head. Rather than giving in to despair they begin chanting “Strike, Strike, Strike…” break into a rousing version of “Solidarity Forever” and refusing to waiting for a messiah, commence acting on their own behalf.

The director Harold Thurman, a close friend of Odets, called the play “the birth cry of the 1930s” and said the playwright’s motive was to explain the plight of poor working class people, “to express his love, his fears, his hope for the world” and fervently wanted to make a connection between audience and actors. The play opened on Broadway on March 26, 1935 and the cast received 28 curtain calls.

In any event, for me, Waiting for Lefty was hopeful agitprop theater, art as powerful social commentary that I could embrace for its contribution to my nascent radical political consciousness. The only parallel I detected between the two plays was the failure of the eponymous characters to appear. In retrospect, not only was I mistaken but Beckett’s work was in fact also profoundly political and remains even more relevant today.

Vladimir: It is true that with folded arms we weigh the pros and cons we
Are no less a credit to our species…But this is not the question. What are
We doing here, that is the question.

Was I sleeping while others were suffering? Am I sleeping now?
At me too, someone is looking, of me too someone is saying he
Too is sleeping, he knows nothing, let him sleep.

It’s notable that this lost awareness, this alienated waiting, does not occur in solitude as the two longtime friends mirror the human condition of being thoroughly dependent upon one another. It would not be a stretch to characterize this as incipient solidarity.

…an established cultural and societal structure which imposes its
Stultifying will upon otherwise hopeful individuals; it is the inherent
Optimism of the human condition, therefore, that is at tension with
The oppressive world.11

This is reminiscent of Italian Marxist Antonio Gramsci’s decision to employ his “pessimism of the intellect” in assessing the world’s wretched reality and then choosing “optimism of the will” in order to move forward. We can hope there’s an aspiring playwright out there who can contextualize a modern day Lefty/Godot into our soul-enervating, neoliberal capitalist world and rewaken an emancipatory spirit that emerges not from outside but from within.

Gary Olson is Professor Emeritus of Political Science at Moravian College, Bethlehem, PA. He can be reached at: olsong@moravian.edu. Read other articles by Gary.
Print