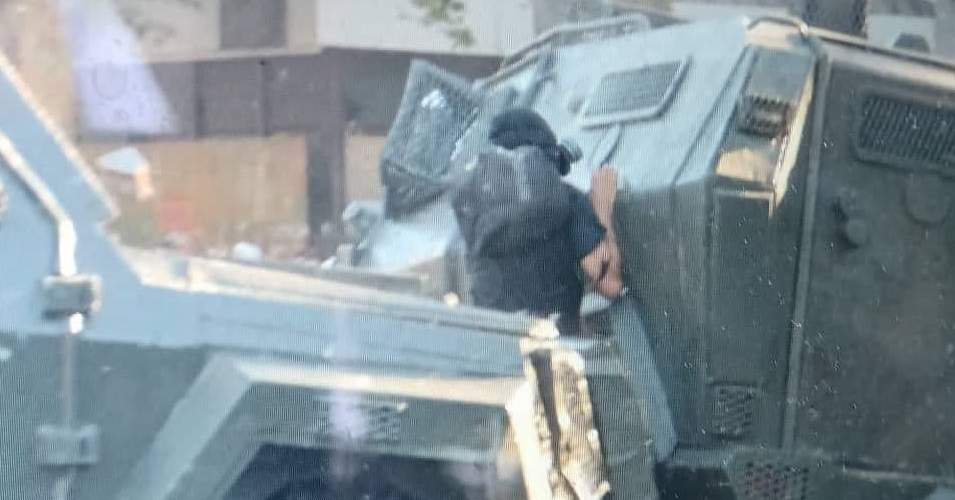 The ongoing protest movement in Chile has had success—the country’s constitution is expected to be rewritten as a concession from President Sebastien Pinera to demonstrators—but still faces a harsh crackdown from government security forces, who in a series of assaults Friday fired projectiles at crowds and crush one young man between two armored jeeps, causing him serious injury.

Twenty-year-old Oscar Ignacio Pérez Cortéz was pinned between two police jeeps—called by protesters zorrillos, or “skunks”—on Friday when one of the vehicles slammed the young man into the side of the other.

Footage from the attack shows outraged demonstrators attacking the zorrillos and tending to Pérez immediately after the assault.

The zorillo attack came during clashes between heavily armed police and unarmed demonstrators.

“The first thing he said to my mother was ‘they did it on purpose,'” tweeted Pérez’s sister Valeria.

Pérez’s mother Maria Cortéz told author Ignacio Vidaurrázaga Manríquez that the police attack on her son was indicative of the state reaction to the protest movement.

“My son Oscar was brutally, intentionally run over and crushed by two skunks,” said Cortéz. “Miraculously is alive. This barbarism endorsed by the monster of the interior and the state of Chile must stop!”

Santiago Metropolitan Province police superintendent Felipe Guevara expressed on Twitter his “regret” for the Friday evening assault. The driver was reportedly arrested and arraigned on Saturday, but the public was not allowed into the courtroom during the alleged arraignment.

Valeria Pérez told reporters outside of the courtroom that the family would not be satisfied with only the guilt of the driver of the vehicle.

“As a family we want it to be known, this is the guilt of the state,” said Valeria Pérez.

Despite the police rhetoric after the attack on Perez, clashes on Saturday saw security forces continuing to use excessive force on protesters.

tw/ i can’t believe shit like this is STILL happening in chile and nobody is doing anything bye pic.twitter.com/whNaSeegZu— ً (@milkshook) December 21, 2019

In the months since the protest movement exploded in October 3,557 people have reportedly been injured by police forces. There have also been reports of police disappearing protesters since the movement began.