When an authoritative book on post-World War II Irish fiction is written, it will be fascinating to see how William Trevor and Iris Murdoch are considered. Not so much their literary qualities, which are undeniable, but whether or not they are embraced as Irish.

They were almost contemporaries. Dame Jean Iris Murdoch was born in Dublin in 1919, William Trevor Cox in County Cork in 1928. Murdoch died in 1999, Trevor in 2016. Both lived their entire literary lives in England — Murdoch’s parents moved to London when she was just a few weeks old while Trevor went there at age 26 in 1954, the year Murdoch’s first novel, “Under the Net,” was published to rousingly good reviews.

I do not know if they ever met or read each other. They had a few things in common such as a love of Russian literature. Murdoch, who was renowned as both a philosopher and novelist, was drawn to the more philosophical writers Dostoevsky and Tolstoy. Trevor leaned toward the painterly sensibility of Chekhov, with whom he was destined to be compared.

They were alike in one other way: Although they lived in England, the subject of much of their writing was Ireland. Certainly there was nothing new about this; many prominent Irish poets, novelists and playwrights who spent most of their adult life abroad, from Wilde and Shaw to Edna O’Brien, did the same. This dual citizenship has afforded the Irish abroad a perspective unique in Western literature, except with the exception of exiles like Vladimir Nabokov. 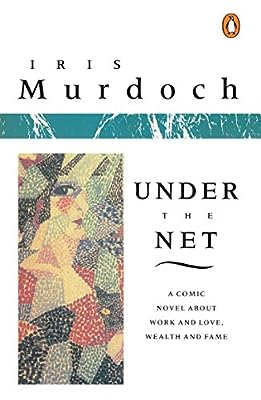 “Under the Net”
Purchase in the Truthdig Bazaar

Of the great poet Louis MacNeice it was said that “to the Irish he often seemed an exile, to the English a stranger.” MacNeice, whose father, a widower, left County Antrim for England when he was 10, wrote angrily and eloquently about his connections with the country of his birth, and in “Valediction” he perhaps summed up the mindset of the Irish writer abroad:

“But I cannot deny my past to which my self is wed,

William Trevor, the greatest Irish-born writer since Joyce not to be afforded the honor of the Nobel Prize, was often—too often—referred to as “the Irish Chekov.” He never denied his interest in or similarities to the great Russian; most of Trevor’s and Chekhov’s stories involve people living outside what is called the mainstream, and who are not particularly bothered by or even aware of that fact. Like Chekhov, Trevor’s stories are about the pursuit, capture and dissection of ordinary life.

But Trevor’s method, entirely his own, puts his people in extraordinary places where a lightning flash gives sudden illumination to some dark corner of their personality. Trevor’s atmosphere is often pervaded by a vague whiff of impending dread that is alien to Chekhov. In these stories about lonely, repressed spinsters, middle-aged salesmen, solitary drinkers, weary shopkeepers, petty thieves, and in one case, a serial killer, Trevor never raises his voice or introduces a note of melodrama; surely he subscribed to John Stuart Mills’ dictum, one revered by Yeats, that “Rhetoric is heard, poetry is overheard.”

Here’s another distinction between the Irishman and the Russian: Chekhov wrote several long stories but only one novel, while Trevor may be judged by future generations of readers to have been a greater novelist than story writer. Perhaps the most misleading characterization of Trevor is that he was a great writer of stories who dabbled in longer fiction. Trevor himself may have contributed to this fallacy when he told The New York Times many years ago, “I start writing away, and sometimes I find myself, to my considerable horror, in the midst of a novel.”

If one of Trevor’s finest novels, “Fools of Fortune,” began as a short story, one can imagine the horror of its characters when they found their angst was to spread out over 200 pages. Published in 1983, “Fools of Fortune” is set during and after The Troubles, which pitted not just Catholics against Protestants but neighbors and even relatives against one another with a ferocity that even Americans during the Civil War never experienced. Readers of Trevor’s stories and other novels, particularly “The Story of Lucy Gault,” will find a similar atmosphere and theme in “Fools of Fortune.”

But the novel isn’t about the war, it’s about its consequences. As Francine Prose points out in its introduction, “one of the most striking things about the book is the extent to which it takes time as its subject.” As Trevor said in an interview, time “both heals and destroys, depending on the nature of the wound.”

“Fools of Fortune” spans 60 years during which we see, as a character says, “Destruction casts shadows which are always there. … We will never escape the shadows of destruction that pervade Kilneagh [the estate house torched by the British Black and Tans].” 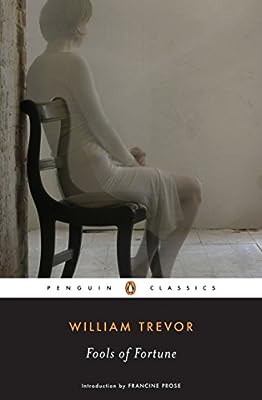 “Fools of Fortune”
Purchase in the Truthdig Bazaar

The story has the sweep of a long historical novel but is told with the compactness of a master of short fiction. It doesn’t end so much as wind down. The characters, Trevor writes, “are aware that there is a miracle in this end”— a quiet miracle, that is, not to be confused with a happy ending.

The salacious wit of Iris Murdoch is the perfect antidote for the ominous aura of Trevor’s work (and vice versa). In the recent flood of appreciation that surrounded her 100th birthday on July 15, critics were torn between “Under the Net” (1954) and Booker Prize winner “The Sea, the Sea” (1978) as her best novel; I favor the light, fast nastiness of the former. (The title has been traced by scholars to a treatise by the Austrian philosopher Wittgenstein—good luck figuring it out.)
The protagonist of “Under the Net,” Jake Donaghue, is a sometime artist, hack writer, and translator who always manages to scrape by. “It’s easier to sell junk when you’re known,” he finds, “than works of genius when you’re unknown.” He is either a gadfly or ingratiating, depending on his mood, and desperately in search of a moral compass. After turning down an easy windfall, he worries: “What prevented the closure of this mutually rewarding deal? My principles. Surely there must be some way round. In similar fixes, I have rarely failed to find one.” When in need of advice, he goes to a museum and talks to the painting, Franz Hall’s “The Cavalier”; the painting talks back to him. When he is barred admission to an entrance for authorized persons, he decides, “I am myself a sort of professional Unauthorized Person.”

The novel covers a few days in his life when he seeks shelter from friends after being thrown into the streets by his lady friend, who’s tired of his shiftlessness. (Rather than beg for forgiveness, Jake “followed my rule of never speaking frankly to women in moments of emotion. No good ever comes of this.”)

Over those few days, Jake is down and out in both London and, for a while, Paris. He manages to connect and reconnect with a wide strata of bohemians, from actresses to gamblers to movie producers and a soapbox Socialist. This is all done in search for the love of his life, whom he scarcely acknowledges until about halfway through the book. It’s a picaresque novel, if the term can be applied to a story in a modern urban setting.

There would seem to be no way that he could avoid a bad end, but, remarkably, Jake, with a little help from his friends—including an aging and engaging movie wonder dog named Mars—has an epiphany.

On an impulse, he takes a job as a hospital janitor, though his coworkers are mildly suspicious of him: “Perhaps some obscure instinct warned them that I was an intellectual.” Still, he discovers “a feeling which was almost entirely new to me, that of having done something.” By the novel’s delightfully unexpected end, Jake sheds his cynicism and rediscovers the literary ideals of his youth.

Purists may not regard “Under the Net” as an Irish novel, though Jake Donaghue is of Irish descent, as is a cousin from Dublin with whom he shares some adventures. Jake bears a bit of resemblance to Gulley Jimson, the reprobate painter in Joyce Cary’s 1944 novel “The Horse’s Mouth,” and a 1955 Donaghue would see a kindred spirit in Sebastian Dangerfield from J.P. Donleavy’s “The Ginger Man.”

For her own part, Murdoch was always ambiguous about her Irishness. In 1978 she told Philippa Foot that she felt “unsentimental about Ireland to the point of hatred”—a sentiment only an Irishman or woman could hold. In 1965, her controversial novel “The Red and the Green” was published, and she came to regret its mildly Irish Republican leanings. According to her biographer, Peter J. Conradi, she sympathized in later years with the Northern Irish anti-Catholic bigot Ian Paisley.

Conradi argues, “No one ever agrees about who is entitled to lay claim to Irishness. Iris’s Belfast cousins today call themselves British, not Irish … [but] with both parents brought up in Ireland, and an ancestry within Ireland both North and South going back three centuries, Iris has as valid a claim to call herself Irish as most North Americans have to call themselves American.”

You can agree or disagree, or you can disregard politics and simply read Murdoch because she’s an outstanding novelist.