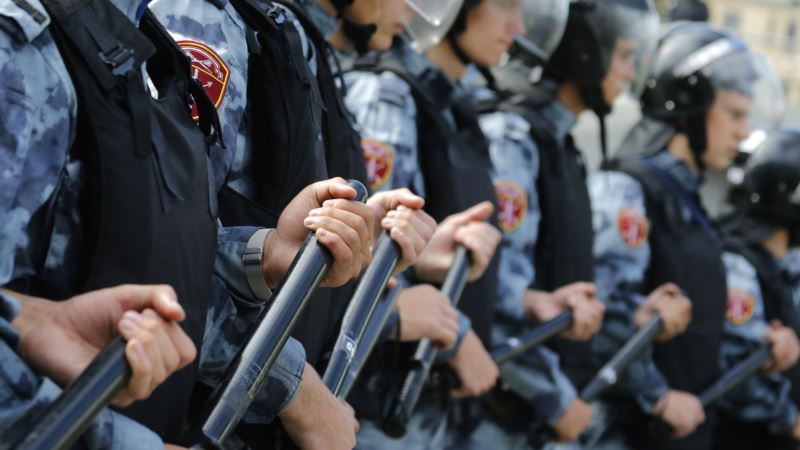 The year 2019 saw Russian protesters taking repeatedly to the streets of the capital, Moscow. The unauthorized demonstrations began after the authorities refused to register most independent candidates in elections for the Moscow Duma. During protests on July 27, more than 1,373 people were detained with hundreds more ending up in custody in subsequent weeks. Here’s the story of some of the protesters who were arrested in dramatic circumstances.
Inga Kudracheva and Boris Kantorovich

Police try to remove Boris Kantorovich as he lies shielding his girlfriend, Inga Kudracheva, during demonstrations in Moscow on July 27.

“The scariest moment was when I was lying underneath Boris and I felt as if the policeman was jumping on him,” Kudracheva told the Associated Press. “I felt like he was going to crush my chest.”

Kantorovich was left with numerous bruises.

The photograph of the couple became a symbol of resistance during the Moscow protests.

Grigory Oganezov (speaking to reporters in this picture) and Maksim Grishenkov were beaten by police with batons as police detained more than a thousand people in Moscow on August 3.

Maksim Grishenkov told Current Time, a project led by RFE/RL in cooperation with VOA, why he decided to stand up for somebody he didn’t know.

“I often saw such videos on the Internet and all the time I thought, ‘Why isn’t anybody doing anything? Why is everybody just standing by and watching?’ I don’t know what hit me, I just decided to do something, because I couldn’t just do nothing and move on.”

On the morning of July 27, Konstantin Konovalov went jogging along Moscow’s Tverskaya street. The police and the Russian Guard were preparing to disperse protesters at a planned demonstration by Moscow’s City Hall building. Although Konovalov went running a few hours before the scheduled start of the rally, the security forces seized him and pushed him to the ground.

Before the protest even began, 89 people were detained.

During the detention, one of the security forces stepped on Konovalov’s leg, breaking it. He spent months in a cast and had to undergo complex rehabilitation.

Aleksandra Parushina, a Moscow City councillor from the opposition party, A Just Russia, told Current Time that she was struck in the head by Russian riot police on July 27 as they dispersed a crowd that was attempting to form near the Moscow mayor’s office.

“The [riot police] were called in with batons and they started pushing us back very brutally and, in this horrific stampede, they began hitting people on their heads,” Parushina said. “I received a blow. At first I didn’t feel the pain, I just saw lots of blood on me from somewhere.”

Parushina subsequently called for the resignation of Moscow Mayor Sergei Sobyanin, a close ally of Russian President Vladimir Putin, saying that what he was doing was “no longer leadership, but destruction.”

Mikhail Bykanov went out for a stroll in Moscow on July 27. Two nights in police custody and one court case later, he returned home a convicted man.

As he later told the judge, Bykanov approached Trubnaya Square just as a crowd rushed in his direction, fleeing from police armed with pepper spray and truncheons. Bykanov instinctively turned and ran with the crowd, then sat down on a bench to take a breath. When a protester beside him began loudly cursing the police, officers seized both men and carried them to a waiting riot van.

The judge pronounced him guilty of participating in an unsanctioned rally and fined him 10,000 rubles ($160).

Bykanov was one of 1,373 people detained by police that day.

Over 2 million rubles ($32,000) in fines have been levied against people whom courts judged to have taken part in the July 27 protest.

One of the most memorable participants of the July 27 Moscow protest was 17-year-old Olga Misik. She read the Russian Constitution to the police and the National Guard. Misik was later detained, but soon released, and then summoned to the police with her mother. There, she claimed, she was told her behavior could jeopardize her hopes of being admitted to the journalism faculty of Moscow State University.

“They told me that my future was ruined, that I wouldn’t get to any university or go anywhere with a case against me, and that everything is great in our country. And they asked me why I was so negative about the police.”

The police later registered Misik with the Government Commission on Juvenile Rights and Affairs. Her mother was fined 10,000 rubles (about $160) for her daughter’s participation in the rally.

Pyotr and Yelena Khomsky went out into the streets on August 3 with their daughters in strollers.

“They deliberately took their daughters close to the crowd of protesters and law enforcement officials in order to prevent their possible detention by the police officers,” a Moscow district prosecutor’s office later alleged.

The couple and their three girls, aged 3 months, 3 years, and 10 years, were seen on state television channels during the rally. The prosecutor’s office demanded that they be stripped of their parental rights.

Khomsky told Current Time that he came to the rally intentionally but did not hold any placards or posters and did not chant any slogans.

“We will not give them [our children.] They are not as mighty as they think they are,” Pyotr Khomsky said.

After legal proceedings, a court refused to take the children from the Khomsky family.

Video of Daria Sosnovskaya’s arrest, widely circulated on the Internet, shows two men in uniforms that resemble those of Russia’s National Guard taking her toward a police van. At one point in the video, the woman appears to try to kick a police baton lying on the street as one of the officers is trying to pick it up. The uniformed officer punches the woman in her stomach and grabs the baton from the ground before shoving her into a police van seconds later.

Tatyana Molokanova, a lawyer for Daria Sosnovskaya, told Current Time on August 13 that her client was hospitalized after complaining of headaches and bruises on her head that she received during her arrest on August 10. Sosnovskaya was diagnosed with a concussion.

An elderly woman sits in a wheelchair in front of rows of riot police on Moscow’s Pushkinskaya Square on August 3. As policemen detained protesters from the crowd and took them away, she sat quietly.

Maria Razmerova had asked her grandson, Konstantin, to bring her to the unauthorized political opposition rally because “she could not sit at home.” This wasn’t her first protest. As she told Deutsche Welle, “It is our civic duty to go out on the streets.”

A week earlier, Maria and Konstantin had attended a rally in front of Moscow’s City Hall, calling for free and fair city council elections.

Konstantin wasn’t afraid of being detained. “I can sit there [in the police station], as well as I can sit on a couch at home,” he said. His grandmother wasn’t scared either, he said. She had nothing to lose. Her doctors had told her she didn’t have long to live.

A 21-year-old student at Moscow’s Higher School of Economics emerged as one of the Kremlin’s most outspoken and influential critics during the protests.

Prior to his arrest on August 2, Yegor Zhukov had already drawn a sizable audience on YouTube, where he had posted a series of video blogs in which he raged against President Vladimir Putin and promoted opposition protests across the country.

Zhukov faced as many as 4 years in prison — the sentence prosecutors had requested for charges of inciting extremism online.

Zhukov said Russia’s current political system had fostered economic inequality that destroyed any opportunity for prosperity, with the top 10 percent holding 90 percent of the nation’s wealth.

“Among them, of course, there are very honorable citizens, but the bulk of this wealth was obtained not by honest labor for the benefit of people, but by banal corruption,” he said.

Zhukov was initially charged with mass unrest, but amid an outcry from his student supporters, prosecutors reclassified the charges against him. On December 6, he was convicted of using the Internet to call for “actions aimed at the violation of Russia’s territorial integrity” and was given a 3-year suspended sentence.

With reporting by Current Time