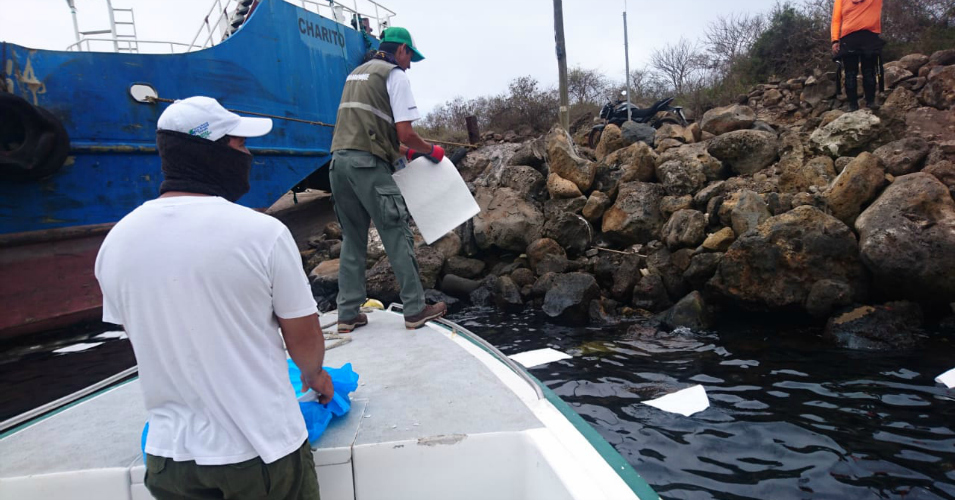 A ship carrying 600 gallons of diesel fuel sank in the Galapagos Islands Sunday, sparking widespread concerns about the impact on local wildlife and the environment as Ecuadorian officials took emergency action to contain the spill.

“A crane collapsed onto an oil barge in a port off San Cristobal Island on Sunday, destabilizing the vessel and causing it to sink,” reported German broadcaster DW, citing local media. “Crew members jumped from the ship into the ocean to save themselves. One person was injured.”

The presidential communications office said in a statement that “the situation is under control, and a series of actions have been deployed to mitigate the possible effects.”

Watch the moment the barge capsized:

The Galapagos National Park tweeted Sunday afternoon that its officials were working with the Ecuadorian Navy to use “containment barriers and absorbent cloths to reduce the environmental risk from sinking of the Orca barge.”

In response, local advocacy group SOS Galapagos wrote that “the illegal and dangerous logistics operation carried out on the property must be moved to another site. Fuels and oils spilled in this accident will reach Mann beach, the only beach in the urban area of [Puerto] Baquerizo.”

A UNESCO World Heritage site, the Galapagos Islands are part of Ecuador and recognized worldwide for the role they played in Charles Darwin’s research that informed his theory of evolution. The ecosystem on the more than 100 islands is highly fragile.

“The Galapagos Island are home to some of the highest levels of endemism (species found nowhere else on Earth) anywhere on the planet,” according to Galapagos Conservancy. “About 80% of the land birds you will see, 97% of the reptiles and land mammals, and more than 30% of the plants are endemic. More than 20% of the marine species in Galapagos are found nowhere else on earth.”

Those species include the giant Galapagos tortoise, marine iguana, and various birds. Reporting on the oil spill Monday, CNN noted that the site of the incident, San Cristobal, “is home to playful sea lions, giant tortoises, and finches, and idyllic beaches. Like most of the islands in the archipelago, travelers there must abide by strict rules in order to protect the flora and fauna.”