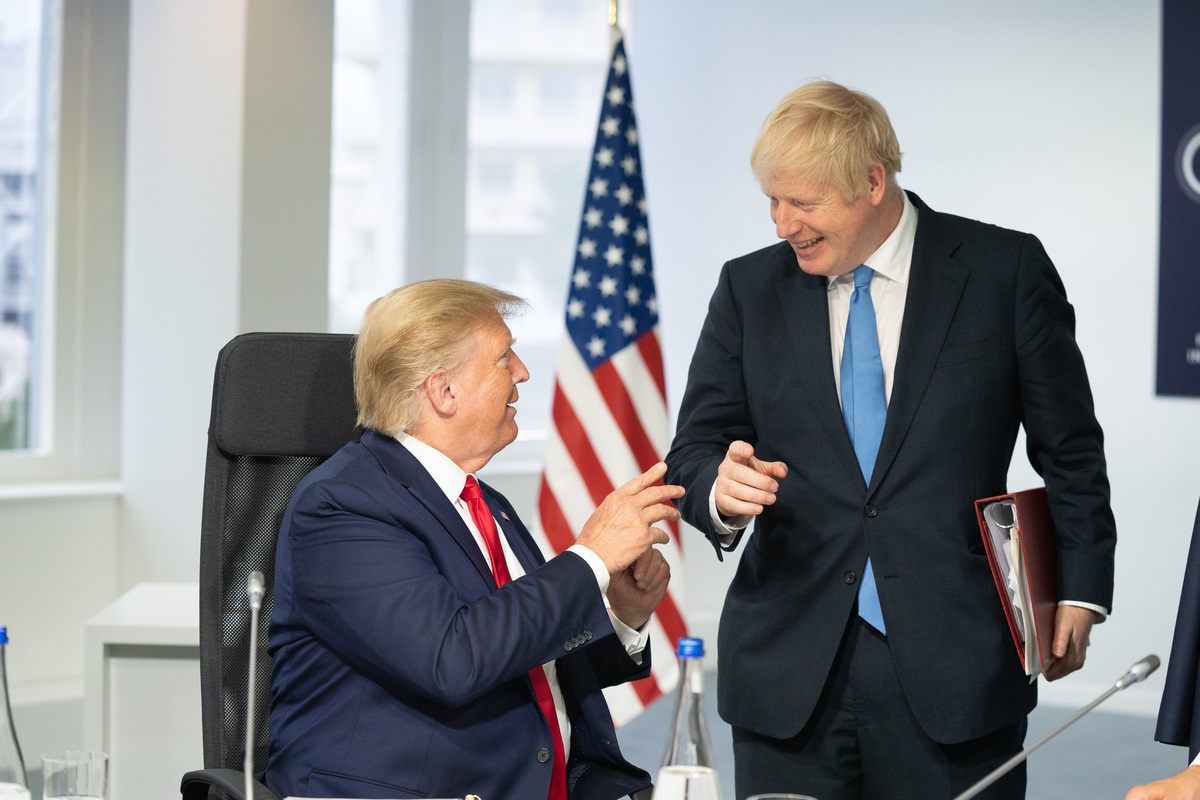 I dutifully got a shot this winter to inoculate myself against four different flu viruses. By exposing myself to weakened strains of these diseases, and preemptively suffering some mild flu symptoms, I can ward off the more serious consequences of a full-on infection and do my part to help stop the further spread of these pathogens.

Both the United States and United Kingdom came down with chills and high fever in 2016.

In the most optimistic scenario, the passage of the Brexit referendum and then Donald Trump’s electoral victory some months would inoculate the general population against an even more serious illness. Surely, once Britons got a foretaste of exiting the European Union they would come to their senses and run back into the embrace of Brussels. Likewise, Americans would experience the horror of a Trump presidency and kick him out of office after his first term (or even before).

In the British election last week, Boris Johnson’s Conservative Party won a decisive victory over both the wavering Labor Party and the more EU-friendly Liberal Democrats. With his commanding parliamentary majority, Johnson will be able to usher the UK out of the EU, and there’s little that anyone can do to stop him.

Meanwhile, across the pond, Congress is impeaching an American president for only the third time in history. That, on the face of it, would seem to be a resolute response to the disease that is Donald Trump. But Donald Trump isn’t going anywhere. According to a number of indications this week, his chances of reelection have even been improved by impeachment — or, at the very least, not adversely affected by it.

Democracy is supposed to be the political system that allows citizens to learn from their mistakes. But what happens when those mistakes are so momentous that they threaten to overwhelm the system and its vaunted self-correction mechanisms?

We’ve been suffering from flu symptoms only to learn that just around the corner is the political equivalent of Ebola.

In the run up to the recent UK election, Boris Johnson couldn’t seem to stop making mistakes. He threatened to pull the UK out of the EU even without a deal, a move so disruptive that members of his own party bolted into opposition. He invoked emergency powers over parliament to force a vote on his Brexit proposal. He lost vote after vote in the House of Commons.

Through it all, Johnson was his usual buffoonish self, a true English eccentric who has lied and cheated his way to the top. He should have been tossed out of office simply for being an insufferable poser.

But Johnson survived because he knew three things. The Labor Party was a house divided between those who favored staying in the EU and those who wanted out. The leader of the party, Jeremy Corbyn, was deeply unpopular, even in some Labor strongholds. And the leader of the Liberal Democrats, Jo Swinson, was eager for new elections, over the objections of her senior associates, because she thought she could climb over two unpopular parties to reach the top of the political heap.

Johnson was thus able to fall back on his only option: call an election and hope to repopulate parliament with his own people. True to form, Johnson has pulled off yet another improbable win.

Labor, meanwhile, suffered an epic fail, losing some seats it had continuously occupied for a century. Corbyn, having presided over this disaster, will be out on his ear. The Liberal Democrats lost ground in parliament — and Swinson herself couldn’t even hold onto her seat.

Up north, the pro-Remain Scottish National Party has consolidated its control in Scotland and will be pushing as hard as possible for another referendum on independence. Johnson has a large enough parliamentary majority to prevent that from happening for the time being. But the United Kingdom may well be the first casualty of Brexit.

The EU leadership, meanwhile, is relieved that Britain will finally follow through on its plan. The UK has always been a pain in the EU’s butt — demanding innumerable exemptions from EU rules, refusing to join the common currency, serving as a European foothold for American-style laissez-faire capitalism. Finally, there’s an end in sight for the seemingly endless Brexit negotiations, which represented yet another example of British intransigence.

Even though the British population didn’t experience a Brexit backlash in this election, there has been a cautionary backlash within the EU itself. No other country is seriously considering exit at this point. But that’s not necessarily good news. The Euroskeptics who were so excited by Brexit have begun to embrace a different strategy: take over the EU. If you were lukewarm about European integration before — because of its neoliberalism, its retreat on immigration, its bureaucratic excesses — you’re going to be even less enthusiastic if the likes of Brexiteer Nigel Farage takes over.

The Brits might have second thoughts about Brexit when their economy tanks, the Conservative Party eviscerates what’s left of the British welfare state, and the removal of EU benefits (like retiring on a British pension to a sunny Mediterranean country) hits home. A future backlash is certainly possible. But crawling back into the EU will not be so easy — and that’s if the EU will have them.

Jeff Van Drew was a Democratic congressman from New Jersey. He entered Congress in 2018 by flipping a district that Trump won two years earlier by five points. The New Jersey legislator positioned himself as a moderate Democrat. He was one of only two congressional Democrats to vote against moving forward with the impeachment hearings.

He hasn’t switched his position on impeachment. But he is switching parties.

Despite declaring last month that he was a lifelong Democrat, Van Drew decided to become a Republican this month. It wasn’t so much the pull factor from Trump’s party as much as the push factor from the Dems. The New York Times reported on a poll of Democratic primary voters in his New Jersey district that showed 71 percent of them less likely to vote for Van Drew if he continued to oppose impeachment.

Jeff Van Drew is not leading a rush to the exits. The Democrats, with enough votes to impeach in the House, are not cracking down on dissenters. And public opinion continues to favor impeachment, at least among Democratic voters (about 83 percent).

The problem is that a lot of politicians are calculating that impeachment is not a winning issue in heavily Republican areas or potential swing districts.

If you’re a Republican, you face a revolt among your constituents if you consider voting for impeachment. Fewer than 10 percent of Republican voters support impeaching the president. Plus, you risk a fatwa from the president.

Consider the transformation of Elise Stefanik (R-NY), a moderate congresswoman who was never gung ho about Trump’s presidential aspirations. When the impeachment hearings began, she became Trump’s attack dog on the House Intelligence Committee. In so doing, she has solidified her Republican Party voter base and gotten a big lift from the president himself.

Is it disgusting? Yes, absolutely. Is it politically astute. Yes, unfortunately.

Or what about Carly Fiorina, the Republican candidate for president in 2016 whose looks Trump insulted on his way to the nomination? She says that Trump should be impeached. But she still might vote for him in 2020!

She’s not alone. A majority of Americans favor impeachment, but recent polling puts Trump ahead of all Democratic rivals on a head-to-head basis. According to a USAToday poll, Trump leads Joe Biden by 3 percent, Bernie Sanders by 5 percent, Elizabeth Warren by 8 percent, and Pete Buttigieg by 10 percent.

Back in September, in a Washington Post/ABC News poll, the top five Democratic hopefuls were beating Trump, with Biden up by an astounding 16 percent, Sanders 12 percent, Warren 11 percent, Kamala Harris 10 percent, and Buttigieg 6 percent. That was only a few months ago!

So, yes, there’s a backlash. But it seems to be against the Democrats, not Trump. As I wrote back in September:

Impeachment of Trump, at this point, is both a legal and moral necessity. It’s also very likely a political trap.

Trump relishes the role of an underdog, persecuted by the powerful. It’s what enables him to connect to a political base that, aside from his deep-pocket funders, feels disempowered by a rigged economy and a sclerotic political system. Impeachment, for this constituency, vindicates the narrative of the “deep state.”

Indeed, it suggests that the entire state is out to get Trump — which it is and should. But impeachment is the only thing that can turn the most powerful man in the world into a cornered victim and thus, for a significant number of American voters, a sympathetic character.

It helps, of course, that the president can point to soaring economic indicators, recently announced trade deals with China and our North American neighbors, and a new space command included in the recent budget bill.

It’s galling that a scofflaw can remain sufficiently popular to win elections. No doubt Trump is eyeing the example of Rodrigo Duterte, the president of the Philippines who has presided over the extrajudicial killing of thousands of people and yet maintains nearly an 80 percent approval rating.

Trump invited Duterte to the White House and praised his deadly war on drugs. Duterte, after all, is the living proof that you can shoot people indiscriminately and still maintain your popularity. Trump, unleashed in a second term, might just try to test the applicability of that model to the United States.

There’s been more than one mass shooting a day in the United States this year: 396 as of December 16, according to the Gun Violence Archive. Despite all the political handwringing and the gradual shift in public opinion over the last few years in favor of stricter gun control laws, federal policy has barely shifted. No assault rifle ban. No “red flag” law. No universal background check

What has happened instead? After the mass shootings this summer, companies with names TuffyPacks reported a 300 percent increase in sales of bullet-proof backpacks. Parents are taking prophylactic measures that are pathetically insufficient. Mass shootings are the new normal. Suck it up and move on.

Americans have similarly adjusted to the criminal actions of the president, his violent policies at the border, his verbal abuse of virtually everyone. We haven’t bought TuffyPacks to protect ourselves from the White House. Our skins have just grown tougher.

And that’s the saddest part of all. It’s just a lot harder to generate a backlash when our backs have become accustomed to the lash.