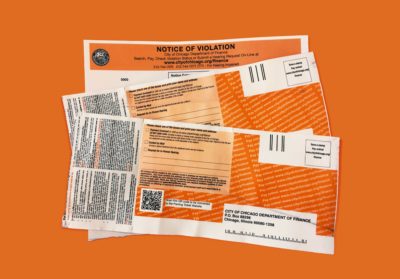 This story is a collaboration between ProPublica Illinois and WBEZ Chicago.

City officials said about 11,400 people applied for some $11.6 million in debt forgiveness by the Dec. 15 deadline. When the debt relief program was unveiled in September, city officials said some 500,000 motorists with $500 million in unpaid city sticker tickets stood to benefit.

Advocates who have led the calls for reforms to Chicago’s system of ticketing and debt collection said they were disappointed the city didn’t do more to promote the program and encourage motorists to sign up.

“This essentially solved none of the problem,” said Eric Halvorson, policy and communications associate with the Chicago Jobs Council, which has led a coalition of nonprofit organizations advocating for local and state ticketing reforms. “We’re going to have to think bigger than just a single amnesty window. And if we do something like this again, we need to take these lessons and promote it more ahead of time.”

Clerk’s office officials said Monday that about 7,500 motorists who had been out of compliance for years and were no longer in the clerk’s database of registered vehicle owners, or were new to the system, bought stickers in October. In comparison, just 742 new records were created during the same period one year earlier.

“If there’s anything the city can do automatically, we need to prioritize that rather than ask people to jump through more hoops and continue to put the onus on individuals and their behavior when the mess has been created by the city of Chicago,” he said.

In an interview Monday, city Comptroller Reshma Soni would not say whether the city would offer another amnesty program or automatically forgive ticket debt. But she said the program was “only one bite of the apple.” Mayor Lori Lightfoot, who campaigned on promises to reform the city’s “addiction” to regressive fines and fees, is committed to making more changes, Soni said. In recent months, the Lightfoot administration has eliminated library fines and announced plans to reduce water rates for low-income residents.

The prorated sticker tickets and debt amnesty are among a number of ticketing reforms prompted by reporting from ProPublica Illinois and WBEZ about how ticket debt has driven tens of thousands of motorists into bankruptcy. Unpaid city sticker tickets, which until recently could reach $488 each with late penalties, are the largest source of ticket debt in the city.

Last December, Valencia convened a citywide task force to study the problems and, in June, issued a series of 14 recommendations for reforming the city’s ticketing, debt collection and impoundment practices. At least four of those recommendations have been implemented, while others, such as reviewing the city’s towing and impoundment practices, have not yet been addressed.

“We have accomplished so much in such a short period of time,” Valencia said in a statement. “We’re proud to say that thousands of our city’s residents were able to take advantage of these reforms.”

Soni said residents from all over the city, including the poorest and wealthiest neighborhoods, took advantage of the program. ZIP code-level data provided to ProPublica Illinois and WBEZ shows that neighborhoods on the city’s South and West sides, including Auburn Gresham, Roseland and Chatham, saw the highest number of applications for debt relief.

Still, some advocates and residents said the online-only application process wasn’t easily accessible for seniors or low-income families with limited internet access, even though city officials set up computers at all finance department offices where motorists can pay tickets to help them apply in person.

Annie Coles, who is 58 and disabled, is one of dozens of indebted Chicagoans who have called ProPublica Illinois in recent months for information on the amnesty program. She said she tried to apply on her own but couldn’t. “I’m not really good with the computers,” said Coles, who said she owes thousands of dollars in unpaid tickets. “I was trying, but it was bringing up so many different websites. I couldn’t get through. I don’t know how.”

Rosazlia Grillier, a parent leader with Community Organizing and Family Issues, a nonprofit organization that has been calling for ticketing reforms, said she remains optimistic about the program. “It’s my hope that there could possibly in the future be another amnesty day where we can learn from what worked well and what didn’t work as well and maybe have some improvements upon it and do it again,” she said.