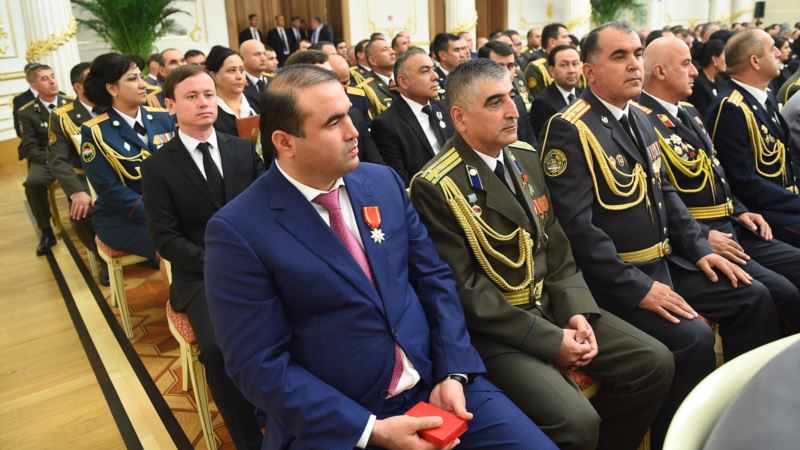 Three months ago, the Faroz company was one of the most successful business conglomerates in Tajikistan, controlled by none other than President Emomali Rahmon’s wealthy son-in-law, Shamsullo Sohibov.

But at the height of that success, Faroz dropped a bombshell and announced it would shut down due to tough market conditions and dwindling profits.

That September 17 announcement was followed by a statement that Faroz would sell its 108 businesses and properties across the country.

Dozens of firms owned by the company removed Faroz signs and billboards from their headquarters and within days it felt like the prominent corporation was being wiped off the country’s business map.

But an investigation by RFE/RL’s Tajik Service indicates that Faroz is still very much active in Tajikistan and that the only change it seems to have undergone is the removal of its signs.

Staying in business would violate a Tajik law that says a company has up to 48 days to end its operations after it notifies the country’s Tax Committee that it is shutting down.

A Faroz statement says the company informed the state Tax Committee on August 26 about its plan to shut down its operations. The committee confirmed that it received such notification.

But in contradiction of those alleged plans to close its businesses, RFE/RL obtained copies of two documents signed by President Rahmon that approve the allocation of large parcels of land for new, long-term business projects by Faroz.

Both of the documents were approved by the president after Faroz informed authorities about its dissolution.

The first document signed by Rahmon on August 31 approves the sale of nearly 14 hectares of land to Faroz in the Isfara, Maschoh, and Panjakent districts. The document says Faroz will use the land for future projects, including the construction of international bus terminals near state borders.

The second document signed by Rahmon on November 2 also allows Faroz to buy land in the Hisor, Tursunzoda, and Shahrinav districts for more bus terminals.

It remains unclear why Tajikistan’s president would approve land sales for projects by a company that has announced its imminent closure, officially saying it “has lost the ability to sustain market competition.”

RFE/RL sent a letter to Sohibov on December 11 requesting comment, but the founder of Faroz didn’t respond to the query.

Faroz is officially registered in Tajikistan as a limited company, with Sohibov identified as its founder and owner.

Until at least early December, the Tax Committee described Faroz as “operational” as opposed to being “closed” or “in the process of shutting down” — the three terms officially used to describe the status of a company.

Faroz says it was established in 2008 as a business entity for the sale and export of fuel.

By 2019, it had established a vast portfolio of lucrative businesses that included transport, construction, trade, banking, metallurgy, tourism and hospitality, health care, media, and education.

In the past 11 years, Faroz has set up 58 separate businesses.

Following the termination announcement, dozens of its fuel stations and companies removed their Faroz signs. But they continue to operate as they did before, several employees told RFE/RL.

Meanwhile, dozens of businesses that belonged to Faroz have ceased operations since September.

They include the Darian Bima insurance group, the British School of Tajikistan, the Avtosantal driving school, and several vehicle-inspection services.

Faroz obtained control of many profitable businesses without much effort and often in deals surrounded in secrecy.

For example, in 2014 the Tajik government allocated $40 million from the national budget to build a brand-new bazaar — Poitakht-90 — later renamed Mehrgon.

As the new bazaar was being constructed in Dushanbe, authorities closed down and bulldozed the city’s old but popular Shohmansur bazaar, paving the way for Mehrgon to become the capital’s largest food market.

In the meantime, Mehrgon mysteriously came under Faroz’s control. It’s not known how or when a major business funded by taxpayers landed on the lap of the president’s son-in-law.

Many members of Rahmon’s family are involved in businesses and politics and exercise dominant control over the Central Asian’s nation’s government and economy.

Rahmon’s eldest son, Rustam, is the mayor of Dushanbe and is believed by many to have been tapped to eventually replace his father, who has been in power since 1992.

Ozoda, one of Rahmon’s seven daughters, is the president’s chief of staff as well as a member of the Senate, the upper chamber of the Tajik parliament.

Rahmon’s brother-in-law, Hasan Asadullozoda, is thought to control a wide range of important businesses, including a major bank and a key airline.

A former collective farm chief, Rahmon comes from a humble background, but as he strengthened his grip on power, his relatives accumulated vast fortunes using their clout with the president.

The Rahmon family’s ever-increasing business interests in the country are widely known among Tajiks, although people hesitate to criticize them publicly, fearing retaliation from security forces in the strictly controlled country.

Some critics argue that by announcing Faroz’s alleged dissolution, the first family wants to deflect public attention from Sohibov’s mounting wealth and influence.

Corruption and unemployment are widespread in impoverished Tajikistan — the poorest country in Central Asia — where the government is also criticized for suppressing dissent and restricting citizen’s rights and freedoms.

Faroz’s announcement to disband comes ahead of presidential and parliamentary elections in 2020.

With a history of undemocratic and unfair elections in Tajikistan, it’s expected Rahmon will win another term and his People’s Democratic Party will continue to dominate the rubber-stamp parliament.

By the same token, Faroz is expected to continue to dominate the country’s business sphere — although that could be under a completely new name.