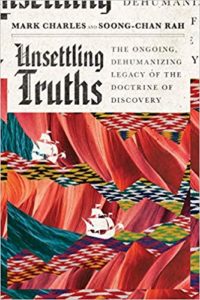 “You cannot discover lands already inhabited,” is a maxim that permeates the excellent book, Unsettling Truths: The Ongoing Dehumanizing Legacy of the Doctrine of Discovery (InterVarsity Press, 2019), by Mark Charles and Soong-Chan Rah. It is a blatantly obvious statement of fact that eludes or has eluded so many people who accept Christopher Columbus as the discoverer of the New World.

Unsettling Truths is a profound work that delves into why American society is what it is, why the United States is the country it is, and why this is so detrimental for so many people in America, especially people of color. The church and its sinful theological interpretations of Scripture formulated the mindset that permitted racism, ethnic cleansing, genocide, and the arrogance of supremacism that undergird the USA.

American supremacism is the mindset that permits nuclear weapons for itself and denies the same for others. (p 36)

The authors argue that the church should be in opposition to empire, instead the church finds itself allied with a brutal empire. (p 58) “Christendom is the prostitution of the church to the empire that created a church culture of seeking power rather than relationships.” (p 66)

Charles and Rah lay out the history of the Doctrine of Discovery which has its origin in the racist Papal Bull of 1452 Dum Diversas issued by pope Nicholas V. It distinguished between Christian Europeans and the others who could be subdued, dispossessed, and enslaved. The slaves could even be tithed to the church. “So, the slave trade becomes an act of worship in the diseased imagination of the European explorers engaged in it.” (p 18) It was the Doctrine of Discovery granted theological license for European supremacism.

This white male supremacism has been embedded in the Declaration of Independence (p 83-84) and the US Constitution (p 90-94).

Thus the Supreme Court in the US has leaned on the Doctrine of Discovery to support the superiority of white Europeans and their right to dispossess the Original Peoples and to slaughter them. (p 104-116)

The authors challenge many concepts and phrasings. For example, “Whiteness is not a privilege nor a blessing to be shared, it is a diseased social construct that needs to be confronted.” (p 124) Or, “What most Americans miss regarding immigration reform is that without Natives at the table, the United States of America is incapable of comprehensively or justly reforming immigration law.” (p 130) 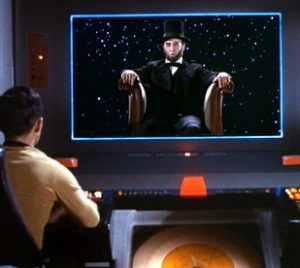 In particular, Charles and Rah call into question the greatness and morality of the lionized American president Abraham Lincoln. Lincoln, they write, was insouciant toward the plight of slaves, blacks, Indigenous peoples, and the Other. The authors reveal that Lincoln’s Emancipation Proclamation was crafted in such a way that many areas and counties throughout the Confederate states were exempted from it, and freeing slaves went unmentioned for Union states where slavery was legal. (p 144) Lincoln’s Thirteenth Amendment is deemed an exchange of jurisdictions; chattel slavery would henceforth be administered by law enforcement. (p 145-146)
“Lincoln’s policies prioritized the flourishing of white landowners while disregarding the value of Native lives.” (p 148) Lincoln presided over the largest mass lynching in US history, the nullification of treaties with Indigenous nations, ethnic cleansing, scalpings, and genocide. (p 148-163)

The Doctrine of Discovery induced various traumas that have impacted the lives of many people across generations, including even in the white population. The authors argue that this latter unintended outcome has wound up affirming the agency and humanity of people of color.

Unsettling Truths is not preachy; it examine scriptures in the bible, but in bits and bites as a necessity. Neither is Unsettling Truths a religious book. As a skeptic who demands evidence, and places greater emphasis for evidence of extraordinary claims, what guided me through the book’s gripping 206 pages was the morality and logic applied to humans and their institutions.

The authors are highly critical of the church: “The American church has yielded the prophetic voice because it has not spoken a historical and theological truth.” (p 9)

Today’s church, however, has no meaningful theological plan to deal with the Doctrine of Discovery:

… a group of clergy might gather to stand and read repudiations of the Doctrine of Discovery; but no land will be returned, no reparations will be paid, and no systemic changes will be made….

Repentance is not just sorrow and confession, it is the turning around of wrong behavior toward right and just action. (p 186)

Near the end of Unsettling Truths, I was surprised to be apprised that president Barack Obama had signed an apology (House Resolution 3326) to the Indigenous peoples. (p 190-192) However, it is buried within a Department of Defense appropriations bill. Furthermore, it comes with a disclaimer that it is legally non-binding. In other words, an apology composed of empty words.

Unlike Obama’s meaningless apology that is devoid of contrition, the text of Unsettling Truths speaks to a way forward. The authors shine a powerful moral light, a light that would lead a remorseful church out of its darkness.

But the authors warn, “Conciliation, does not happen without truth telling.” (p 11) And, of course, that truth telling must be backed with meaningful, affirmative action.