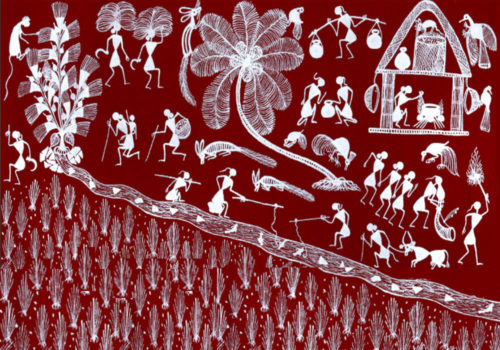 Daniel Maingi works with small farmers in Kenya and belongs to the organisation Growth Partners for Africa. He remembers a time when his family would grow and eat a diversity of crops, such as mung beans, green grams, pigeon peas and a variety of fruits now considered ‘wild’.

Following the Structural Adjustment Programmes of the 1980s and 1990s, the foods of his childhood have been replaced with maize. He says that in the morning you make porridge from maize. For lunch, it’s boiled maize and a few green beans. In the evening, a dough-like maize dish is served with meat. He adds that it is now a monoculture diet.

The situation is encapsulated by Vandana Shiva who says if we grow millets and pulses, we will have more nutrition per capita. But If we grow food by using chemicals, we are growing monocultures, which leads to less nutrition per acre, per capita. Monocultures do not produce more food and nutrition but use more chemicals and are therefore profitable for agrochemical companies.

Moving from Africa to Mexico, we can see that agri-food concerns have infiltrated the food system there too. They are taking over food distribution channels and replacing local foods with cheap processed commodities. Free trade and investment agreements have been critical to this process and an alarming picture is set out of the consequences for ordinary people, not least in terms of their diet and health.

In 2012, Mexico’s National Institute for Public Health released the results of a national survey of food security and nutrition. Between 1988 and 2012, the proportion of obese women between the ages of 20 and 49 increased from 9 to 37 per cent. Mexican children are increasingly overweight, while one in ten school age children suffered from anaemia. Diabetes is now the third most common cause of death in Mexico.

The former UN Special Rapporteur on the right to food Olivier De Schutter concluded that the trade policies currently in place favour greater reliance on heavily processed and refined foods. He added that the overweight and obesity emergency that Mexico is facing could have been avoided or largely mitigated if the health concerns linked to shifting diets had been integrated into the design of those policies.

The North America Free Trade Agreement (NAFTA) has led to foreign direct investment in food processing and a change in the country’s retail structure. As well as the emergence of global agribusiness companies in Mexico, there has been an explosive growth of chain supermarkets and convenience stores. Traditional corner shops are giving way to corporate retailers that offer the processed food companies even greater opportunities for sales. For example, Oxxo (owned by Coca-cola subsidiary Femsa) was on course to open its 14,000th store sometime during 2015.

Policy makers have been facilitating the corporatisation of Indian agriculture and the food processing and retail sectors, both of which have tended to be small scale and key to supporting local (rural) economies and livelihoods. There are of course major implications for food security and food sovereignty, but what this could mean for the nation’s diet and health is clear to see.

The commodification of seeds, the selling of more and more chemicals to spray on crops or soil, the chemicalisation of food and the selling of pharmaceuticals or the expansion of private hospitals to address the health impacts of the modern junk food system is ‘good for business’. And what is good for business is good for GDP growth, or so we are told. This is nonsense.

In the latest edition of India’s Current Science journal, a guest editorial by Seema Purushothaman notes the importance that small farms could play in addressing poverty, inequality, hunger, health and climate issues. But the development paradigm is obsessed with a misguided urban-centric GDP ‘growth’ model.

And that author is correct. Whether it involves Mexico or India, to address nutrition, we must focus on small farmers. They and their families constitute a substantial percentage of the country’s poor (and undernourished) and are the ones that can best supply both rural and urban populations with nutritious foods cultivated using agroecological farming practices. Numerous high-level official reports have emphasised the key role that such farmers could have in providing food security.

However, western agri-food corporations are acquiring wider entry into India and are looking to gain a dominant footprint within the sector. This is being facilitated by World Bank ‘ease of doing business’ and ‘enabling the business of agriculture’ directives as well as the implementation of the corporate-driven Knowledge Initiative on Agriculture (KIA), which was signed with the US in 2005.

These corporations’ front groups are also hard at work. According to a September 2019 report in the New York Times, ‘A Shadowy Industry Group Shapes Food Policy Around the World’, the International Life Sciences Institute (ILSI) has been quietly infiltrating government health and nutrition bodies. The article lays bare ILSI’s influence on the shaping of high-level food policy globally, not least in India.

ILSI helps to shape narratives and policies that sanction the roll out of processed foods containing high levels of fat, sugar and salt. In India, ILSI’s expanding influence coincides with mounting rates of obesity, cardiovascular disease and diabetes.

Accused of being little more than a front group for its 400 corporate members that provide its $17 million budget, ILSI’s members include Coca-Cola, DuPont, PepsiCo, General Mills and Danone. The report says ILSI has received more than $2 million from chemical companies, among them Monsanto. In 2016, a UN committee issued a ruling that glyphosate, the key ingredient in Monsanto’s weed killer Roundup, was “probably not carcinogenic,” contradicting an earlier report by the WHO’s cancer agency. The committee was led by two ILSI officials.

From India to China, whether it has involved warning labels on unhealthy packaged food or shaping anti-obesity education campaigns that stress physical activity and divert attention from the role of food corporations, prominent figures with close ties to the corridors of power have been co-opted to influence policy in order to protect agri-food corporations’ bottom line.

In the absence of government support for agriculture or an effective programme for delivering optimal nutrition, farmers are also being driven to plant crops that potentially bring in the best financial returns. A recent article on the People’s Archive of Rural India website highlights farmers in a region of Odisha are being pushed towards a reliance on (illegal) expensive genetically modified herbicide tolerant cotton seeds and are replacing their traditional food crops.

The region’s strength lay in multiple cropping systems, but commercial cotton monoculture has altered crop diversity, soil structure, household income stability, farmers’ independence and, ultimately, food security. It is also undermining farmers’ traditional knowledge of agroecology which has been passed down from one generation to the next.

Although agri-food capital has been moving in on India for some time, India is an agrarian-based country underpinned by smallholder agriculture and decentralised food processing. Foreign capital therefore first needs to displace the current model before bringing India’s food and agriculture sector under its control. This is precisely what is happening.

Although this article touches on many issues, at the heart of the discussion is how we regard food. Are we to be denied the fundamental right to healthy food and well-being or is food just another commodity to be controlled by rich corporations to boost their bottom line?

Colin Todhunter was named in August 2018 by Transcend Media Services as one of 400 Living Peace and Justice Leaders and Models in recognition of his journalism. Join him on Twitter. Read other articles by Colin, or visit Colin’s website.
Print