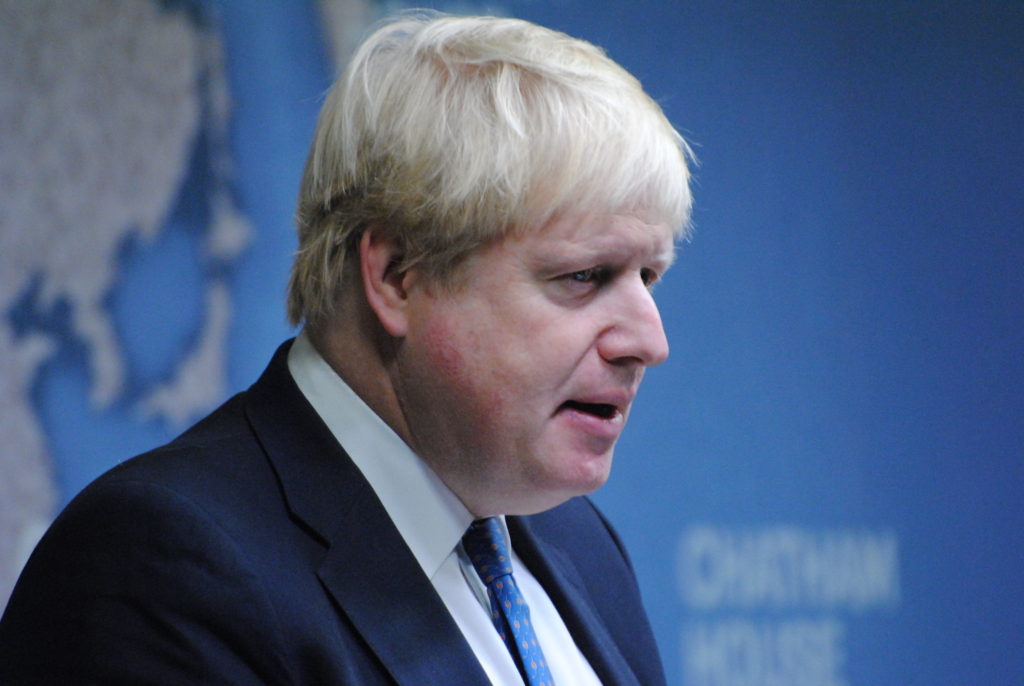 Marc Steiner: Welcome to The Real News. I’m Marc Steiner. Great to have you with us. So imagine you heard someone say or write about Jews as people who control the media, being shady business people, greedy, who exploited immigrant labor, and hurdled around the red-light district looking for “a bit of black.” Who also, let me quote from this, “Some kind of fiddling of the figures in an election by oligarchs of Jewish origin.”

Sounds a little antisemitic, or maybe a lot of antisemitic. And imagine hearing that same person talk about mixed race people as half-caste, coffee- colored, without “Too many Negroid features,” or as bush people on the hunt. Sound a little racist to you? I think so.

Or Arabs as Islamic nutcases, with slanty eyes and hook noses. That you could tell from a distance because of their one brow. Sound a little Islamophobic? Just a little, maybe? Well guess who said that? In his 2004 novel, 72 Virgins, the same man who said Obama was half-Kenyan, so he had an ancestral dislike of Britain and the British people. It was this man.

Juarez Johnson: Okay. Well I will say about that. I do think it is a very serious business when, when the chief rabbis speaks is as he does. I’ve never known anything like it. It is a failure of leadership on the part of the labor leader that he has not been able to stamp out this virus in the labor party. But I’m afraid it’s, it is, it is cognate with a, a general failure of leadership that we’re seeing at the moment.

Marc Steiner: So we know who that is. Mr. Juarez Johnson. And Jeremy Corbyn is the anti-Semite? How does labor in Britain not scream from the rooftops that are blatant antisemitic, Islamophobic, racist, Philander about to move into or perhaps he has where he moved into 10 Downing Street. How did that happen? We’re joined once again by Moshé Machover who is founder of Matzpen, the Israeli socialist organization in the early sixties continues his political work and professor of philosophy at the University of London. Welcome back Moshé. Good to have you with us.

Moshé Machover: Very nice to be with you.

Marc Steiner: So how did this get overlooked? I mean, the news was nothing but about Johnson being, I mean, about Corbyn being an anti-Semite, when Johnson says blatant racism and antisemitic words are known by all. So what happened?

Moshé Machover: Well that only goes to show the slant of the mainstream media, including the BBC and the allegedly progressive Guardian. They are interested not in hunting down real antisemitism, but the fake antisemitism, which is basically hostility or the policies of Israel and to the Israeli Zionist regime.

Marc Steiner: But what does it also say just about where Britain is? I mean I was thinking about this, maybe this is no connection. Maybe you’ll make a connection for us. But when I, when I watched the football match soccer match of the day and these kind of crowd just taunting black players and this kind of viral racist stuff streaming out of this, and then you have the same kind of racist though, I would say intellectually more subtle racism of Boris Johnson come out. There is a connection here. Right?

Moshé Machover: Yes. Yes. That is a connection. And you see, Boris Johnson is not a man of any conviction, including possibly racist ones. He merely uses it as a crowd pleaser. He is using these anti-Semitic tropes that you quoted. And there are more. I mean, you haven’t covered the whole shift of the book, 72 Virgins. I think he, he’s doing it simply as as a way of appealing to a certain crowd. And I mean by, it’s by no means the case that the racist out bursts walked in the football game expresses the day prevailing feeling in the British public. But there’s a certain section of it that is racist. After all, you know, Britain was an empire based on racism.

I mean, racism was used in order to justify and console the empire. Britain in the industrial revolution was based on slavery. The slaves were employed in the, in the Southern United States and in the Caribbean. But what that fed the cotton industry in Manchester. The slaves were growing, picking the cotton in the Southern, Southern United States, and in the Caribbean and these fed the machines in Manchester. And this is how Britain industrialized and became an empire. So racism is endemic in certain sections. I mean, is necessary to certain sections of the of the British public. It’s by no means universal, but there’s always manifestations. But the answer to your original question, why it was ignored is because the mainstream media is not really interested in Boris’s not good enough racism. But in the alleged and imaginary antisemitism in the Labor Party. Of course, this is helped by the fact that this witch hunt against so-called and antisemitism in the Labor Party is supported by scabs within the Labor Party.

Marc Steiner: But you have this. I mean, this is just to kind of get a sense of this for our viewers. I mean, this book, 72 Virgins was written by Boris johnson in 2004. Published in 2004. He was a government official, he was a minister in the government. And he wrote this blatantly anti-Semitic, racist novel that had a Serbian fascist who was hunting down Muslims as one of the main characters. I mean, I can just fathom how someone could publish that and then still end up becoming the prime minister.

Moshé Machover: Well then you have to read. You see that, that shows you the kind of regime with eh and, and you know, you have something not, not very different in the United States. How can, how can somebody the like the Donald become president of the United States? Mind you, in both cases they achieve powered by a minority of the votes. I mean, people have forgotten that Donald Trump did not achieve a majority of their popular vote. He was shortened by about 3 million votes. But because of the sick electoral system that you have, and because of the sick electoral system that Britain has, you can get to be prime minister here by securing less than a majority of the votes. That is how it happens. And it shows you also the nature nature of the media.

By the way, at the time when he was liking this novel, he was also, I think, editor of the journal weekly call The Spectator. And he was the editor of that magazine. And he published a series of articles by a well known, racist writer. I mean, not himself. But he was, he was giving space to a notorious racist writer who published in The Spectator. So it’s a little bit vague. I mean, if you’re interested in asking what his own views are, I think the answer is, he hasn’t gotten any fixed views. I mean he’s a narcissist, basically. I mean, much the same as you have in the president of the United States, who is a narcissist. But he’s a better educated narcissist. And a possibly more intelligent one. He uses racism as, as a crowd pleaser to appeal to a certain section of the public.

Marc Steiner: Well, I guess we’ll see how this unfolds. You’ve have five years of him and we’ll see what happens between, as you called him, the Donald and, and Boris good-enough and see what [crosstalk 00:10:36]

Moshé Machover: We’ll see if he lasts five years. It’s not at all clear. You know, things happen. He may have a solid majority now and a united party, but the future is not strictly foreseeable.

Marc Steiner: Things can unravel. Well, they can unravel and they do unravel often. So well, let’s hope. So, Moshé Machover, thank you so much for joining us. It’s always a pleasure to talk to you. Have a lovely holiday and happy new year.

Moshé Machover: It’s a pleasure. And the same to you.

Marc Steiner: We’ve been talking to Moshé Machover and this is Mark Steiner here for the Real News Network. We want to thank you so much for joining us. Have a wonderful new year and take care.