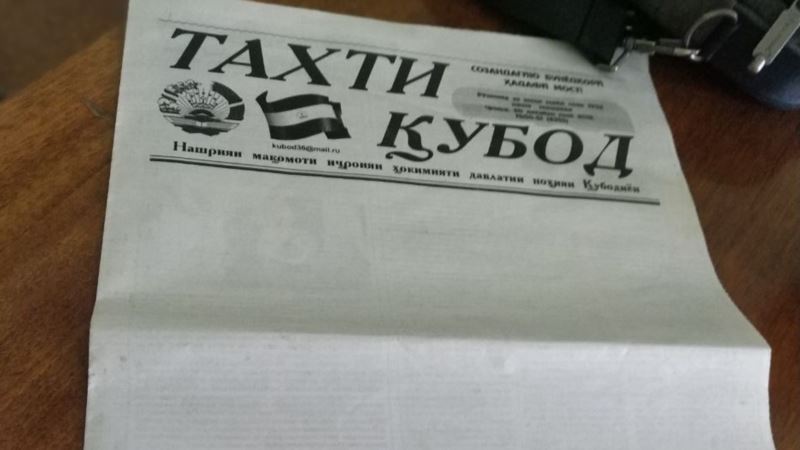 A government-owned weekly Tajik newspaper published its latest edition on December 24 with a blank front page in protest of not having the ability to access “objective information” because local officials refuse to speak to or inform journalists.

It was the first time a state-owned publication in the Central Asian country has publicly protested in such a manner, joining other privately-owned publications which in the past have published blank or blacked-out pages to draw attention to an issue or decry censorship.

In a column published on the second page of the newspaper, Alolat Saifulloyeva, the chief editor of Takhti Kuboda, wrote that the “first page is a mirror image of how each official should see their own appearance.”

She said the blank page one is a “protest against the lack of objective information and the refusal of officials to cooperate with local journalists.”

Saifulloyeva told RFE/RL’s Tajik Service on December 25 that not one local official “has written a column for the district newspaper” this year.

The eight-page weekly is the official publication of the Kubodiyen District Administration in the Khatlon region and is serviced by two teachers on a part-time basis.

It is the only local news publication.

“I know that the district head and other officials will not like the ‘white page,’ but I’m a journalist, and it’s important for me that the authorities understand: one or two journalists cannot cover all the problems that exist in the region. And there are more than enough problems,” Saifulloyeva said.

The inaccessibility of officials is an overall problem faced by Tajikistan’s mass media. Government agencies and bodies rarely respond timely to media inquiries or ignore them altogether.

Many independent media outlets have been forced to stop publishing due to pressure and censorship, and a number of journalists have left the country. Those who have chosen to stay, work in difficult conditions. Rights groups note the constant blocking of news sites in Tajikistan, as well as the use of blackmail and harassment by the authorities, which result in excessive editorial caution and self-censorship.

A poll conducted this year by the National Association of Independent Mass Media in Tajikistan found that 96 percent of Tajik journalists are dissatisfied with the current state of access to information.

Rights groups say Tajik President Emomali Rahmon, who has ruled Tajikistan since 1992, has used the security forces, judicial system, and other levers of power to sideline opponents, independent journalists, and suppress dissent.