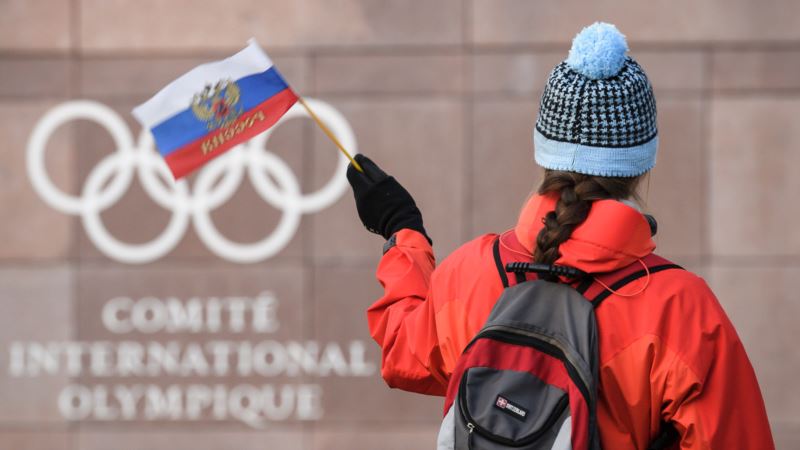 The storm clouds were gathering, once again casting a pall over the future of Russian sports, and the country’s athletes were told to prepare for the best — even when the worst appeared inevitable.

“There shouldn’t be worries that they will not take part in competitions,” Sports Minister Pavel Kolobkov told the heads of Russia’s sports federations on November 27. “They will compete under the Russian flag, wearing our national gear with our symbols.”

Anxiety was high after Russia’s five-year effort to clean up its act following a major cheating scandal was judged harshly by the World Anti-Doping Agency (WADA), signaling that a new course of punitive sanctions was in the offing.

The exposure of an elaborate state-sponsored doping program and cover-up effort had already tarnished Russia’s showcase 2014 Winter Olympics in Sochi, and left its teams on the sidelines during Olympic competitions in Rio in 2016 and in Pyeongchang in 2018, among other major sporting events.

The scandal involving manipulated drug tests, clandestine urine-sample swaps, and corruption at the highest levels of authority meant that those who did earn the right to compete had to do so under another banner — as authorized neutral athletes under the nondescript logo AOR, or Athlete Of Russia.

After those embarrassments, 2019 had started promisingly for Russia. Despite missed deadlines, in January WADA finally got what it had long sought: access to blood samples and a computer database stored at the national testing laboratory in Moscow. The development, which would allow investigators to compare the database with one provided by former lab head-turned-whistle-blower Grigory Rodchenkov, prompted WADA to praise the cooperation it was getting from Russia, particularly the newly reinstated Russian Anti-Doping Agency (RUSADA).

Hopes were high that Moscow had done enough to get Team Russia back on the playing field.

But bad news was bubbling up fast. First, Team Russia’s suspension was upheld ahead of the World Athletics Championships in Doha in autumn 2019. And with the 2020 Olympics in Tokyo on the horizon, WADA’s Compliance Review Committee in November recommended a new round of punitive sanctions.

On December 9, the hammer came down when WADA’s Executive Committee endorsed the recommendations and banned Russia from competing not only in the Tokyo Olympics next summer, but in all major sporting events for the next four years.

“For too long, Russian doping has detracted from clean sport. The blatant breach by the Russian authorities of RUSADA’s reinstatement conditions…demanded a robust response,” WADA President Craig Reedie said in announcing the decision on December 9.

“Russia was afforded every opportunity to get its house in order and rejoin the global anti-doping community for the good of its athletes and of the integrity of sport, but it chose instead to continue in its stance of deception and denial,” Reedie added.

There would be no singing of the national anthem. No donning of national gear. No hosting of, or even bidding for, major sports competitions. And RUSADA, while still allowed to operate and viewed as crucial to the effort to dismantle Russia’s state-sponsored doping program, was declared noncompliant with the World Anti-Doping Code and the terms of its controversial 2018 reinstatement.

‘A Lot Of Questions’

High jumper Maria Lasitskene, who won gold as a neutral athlete in the 2015, 2017, and 2019 World Athletics Championships, voiced her frustration with Russia’s sports authorities in an open letter published by the Russian website Chempionat (Championship).

“I was deprived of the Russian flag at the end of 2015. And it will be returned for good, most likely, only in 2024,” Lasitskene lamented.

“I’m no judge or executioner who can pronounce a verdict or impose punishment on the guilty: I am an athlete who has a lot of questions,” she wrote. “Why do our athletes continue to systematically use banned substances, why do coaches caught doping continue to work with impunity, and why do our bureaucratic bosses continue to falsify official documents?”

Former world No. 1 and Olympic tennis champion Yevgeny Kafelnikov, speaking to Current Time on December 9, said that “there was a doping system in Russia, I have no doubt about that, and someone should be punished.”

“Doping is a stigma that’s going to be very hard to wash away,” he said.

“Russian sport could preserve its reputation if the people who did all this would just come out and say, ‘I screwed up, please forgive me,'” Kafelnikov added. “But nobody wants to take responsibility for this.”

But amid calls for people in charge to own up to Russia’s failures, the authorities have instead positioned themselves to start 2020 in a showdown with the international sports community.

On December 19, RUSADA’s supervisory board voted against accepting the ban, kicking the final decision up the level to RUSADA’s board of founders, comprised of the Russian Olympic Committee (ROC) and the Paralympic Committee. The board of founders, meeting on December 24, signed off on the appeal and hired two separate Swiss legal teams to argue the Russian case before the international Court of Arbitration for Sport (CAS) in Lausanne.

“ROC and RUSADA will be represented by different legal firms,” ROC President Stanislav Pozdnyakov announced after the meeting.

Such a legal course was all predicted by Sports Minister Kolobkov early on, when he said on December 9 that it was “too early to speak about sanctions,” saying that “there will be an objective process. All testimony will be heard.”

Ahead of a December 19 meeting, board Chairman Aleksandr Ivlev vowed that “RUSADA and the supervisory board will make every effort to protect the interests of ‘clean’ athletes.”

Andy Brown, editor of The Sports Integrity Initiative, said even before RUSADA’s decision to appeal that Russia and WADA appeared to be in a serious standoff.

“WADA is basically saying, look, we compare the data that we were given in November 2017 with the data we retrieved from the laboratory in January this year and there are substantial differences,” he said. “And the Russian response says, ‘We didn’t do it.’ It says that this was a criminal conspiracy by Dr. Rodchenkov — the former director of the laboratory.”

Rodchenkov — whom President Vladimir Putin has branded an untrustworthy “jerk” — is a convenient scapegoat for the Russian authorities, who frequently blame Western governments and their alleged recruits inside Russia for homegrown problems.

The whistle-blower is living under witness protection in the United States, where he fled in 2016 after handing over a database from the national testing lab he once ran, revealing an elaborate system set in motion by the state, sports officials, and athletes to manipulate doping tests for the Sochi Olympics and other events.

In announcing the ban on December 9, WADA said that it had “responded in the strongest possible terms, while protecting the rights of Russian athletes [who] can prove that they were not involved and did not benefit from these fraudulent acts.”

But Russian officials, including Putin, assert that the innocent are being punished. Much of the argument for an appeal of the WADA ruling centers on the idea that the ban is unfair to Russia’s clean athletes.

The punitive measures endorsed by WADA are “cruel, unjust, egregious, and murderous for Russian sport,” said Yelena Isinbayeva, a two-time Olympic gold medalist whom many consider the best female pole-vaulter ever — and who sits on RUSADA’s supervisory board but appears not to have voted on December 19.

“As an athlete who has competed and succeeded in the Olympics…and who embraced the core values of excellence, respect, and friendship, my heart goes out to my fellow athletes who will suffer from this collective punishment,” said State Duma Deputy Vyacheslav Fetisov, who helped the Soviet Union win Olympic ice-hockey gold in 1984 and 1988 before starring in the NHL.

Putin, who said immediately after the ban that Moscow had “every reason” to appeal, made his case during his annual press conference on December 19. He openly criticized WADA’s sanctions, saying they were “not only unjust, but also defy common sense and are illegal.”

His argument was that “if an overwhelming majority of Russian athletes are clean” — a contentious point that has not been established — then “how can they be sanctioned for someone else’s actions?”

Officials in Moscow have also gone a step further, suggesting that Russia itself is the victim of a plot or some sort of mania that has much of he world bent on barring it from success in sports — a variation on Putin’s frequent claim that the United States and its allies are determined to keep Russia in check geopolitically speaking.

“The fact that all these decisions are repeated, and often in relation to athletes who have already been punished in one way or another…suggests that this is a continuation of the anti-Russian hysteria that has already become a chronic condition,” Prime Minister Dmitry Medvedev said.

Whatever the outcome of the appeal, there are several upcoming competitions — including UEFA European soccer championship qualifiers next summer — in which Team Russia will suit up.

Spectators will see a Russia team compete in Euro2020, for example, because WADA’s ban only covers international, multisport events or world championships — and the Group B fixtures to be held in St. Petersburg in June and July do not fit those categories.

As they brace for the what promises to be a lengthy process of appeals and counterarguments ahead of the 2020 Olympics, some in Russia are putting on a defiant face and suggesting that in a “Russia vs. the World” scenario, Russia doesn’t need the world.

The Russian Boxing Federation, for one, has vowed that its athletes will not fight in the Tokyo Games at all unless they can compete under the Russian flag.

And Federation Council speaker Valentina Matviyenko — who, as head of the upper parliament house, is a prominent element of Putin’s ruling system — floated an idea that seems likely to have more appeal among officials than among athletes hoping for a chance to prove they are the best in the world: “Russia could host its own games, at home.”