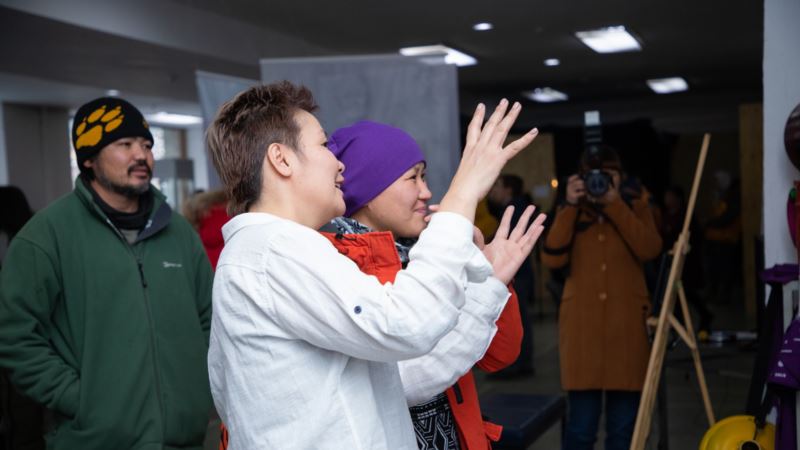 BISHKEK — A prominent activist in Kyrgyzstan has reported being attacked in Bishkek by unknown assailants against a backdrop of recent protests by anti-feminism groups.

Aigul Karabalina, who was born in neighboring Kazakhstan but lives in Bishkek, said on Facebook on December 27 that two unknown men attacked her late on December 26.

She said she suffered a concussion and bruise under the eye and planned to leave Kyrgyzstan with her child out of concern for their safety.

“I’m scared and I want to leave so I don’t endanger my baby,” Karabalina wrote.

Karabalina was a coordinator of the 1st Feminnale exhibition of contemporary art that was held at the Gapar Aitiev Arts Museum in Bishkek in late November despite pressure from anti-feminism groups.

A performance by a partially dressed Danish activist seeking to draw attention to the plight of sex workers caused a local outcry among conservatives in the Central Asian state of around 6 million people.

Anti-feminism groups met with Culture Minister Azamat Jamankulov on December 2 demanding that he ban similar events in the future.

Museum director Mira Jangaracheva was forced to resign, saying she and subordinates had received death threats.

Anti-feminism groups also held a public event called The Certain Route, seeking to “preserve” what they described as “national roots and culture.”

They publicly condemned the Feminnale and placed posters on Bishkek public transportation that read, “Nation Is Above Law,” “You Can Divorce, But Do Not Separate From Nation,” and “Do Not Strip, It’s Shameful!”