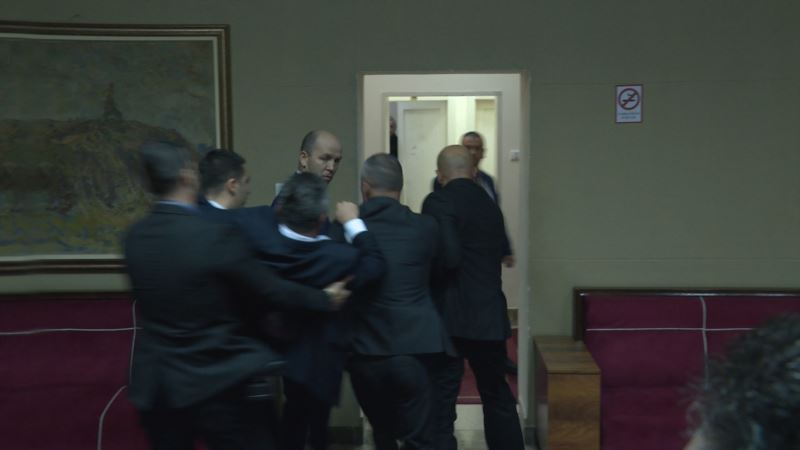 PODGORICA — Montenegro’s parliament, in a session marred by violent protests inside and outside the chamber, has adopted a law on religious communities that the pro-Serb opposition fears could strip the Serbian Orthodox Church of its property.

Lawmakers present in the parliament in the early hours of December 27 voted 45-0 for the law, after members of the Democratic Front (DF) opposition charged to the head of the chamber, swearing at colleagues from the majority and attempting to prevent the vote from taking place.

Some 36 other parliamentarians in the chamber boycotted the vote, giving the ruling coalition a clear path to adoption of the bill after more than eight hours of bitter debate.

Some of the protesting lawmakers appeared to have been removed from the building by law enforcement, but it was not immediately clear if they had been detained.

The DF submitted more than 100 amendments to the bill, but they were rejected by the ruling coalition.

Earlier in the day, hundreds of supporters of the pro-Serb opposition took to the streets in the capital to rally against the draft of the law.

Riot police in helmets placed metal barriers along the street of Podgorica to prevent the protesters, including some priests, from reaching the parliament building where lawmakers were debating the bill.

Protesters were angered by the requirement that religious communities would need to show evidence of ownership of their property from before 1918, when Montenegro joined a Balkan kingdom.

The Serbian Orthodox Church claims the law will strip it of its property, including dozens of medieval monasteries and churches, and said it plans to file a complaint with international organizations.

Montenegro officials denied the church would lose its property. Prime Minister Dusko Markovic met with Bishop Amfilohije, the head of the Serbian Orthodox Church in Montenegro, in an attempt to ease tensions, saying there was “no hidden agenda” behind the law.

The European Union days earlier cautioned Montenegro to regulate communities “in an inclusive way” and in accordance with international and European human rights standards.

The European Union is currently considering membership for Montenegro. The tiny Balkan country joined NATO in 2017.

Montenegro’s pro-Western president has accused the Serbian Orthodox Church of promoting pro-Serb policies within the country and seeking to undermine its statehood.

The Serbian Orthodox Church is the dominant religious organization in Montenegro, a nation of 620,000 predominantly Orthodox Christians. Montenegro split from its larger neighbor Serbia more than a decade ago.