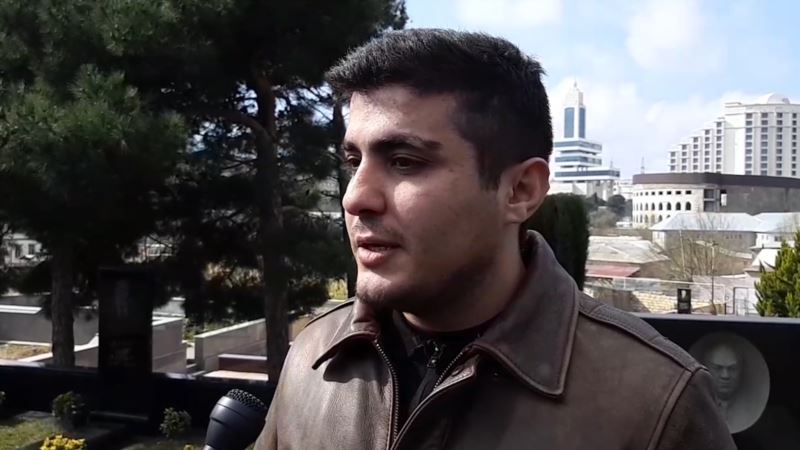 A prominent anti-corruption blogger in Azerbaijan once jailed over his allegations of police abuse says he and five others were beaten by police without explanation in downtown Baku overnight on December 27-28.

Mehman Huseynov, who ran as a candidate in this month’s municipal elections and complained afterward of vote irregularities, said police officers detained him and the others and beat them after taking them to an unknown location.

“Six people were beaten by the cops,” he said on December 28. “They didn’t say why. Just, ‘Where’s the poster? Where are they? Why are you organizing a rally?'”

Huseynov was released in March after serving a two-year prison term for allegedly libeling police by accusing them of mistreatment in January 2017.

That case prompted international calls for Huseynov’s release and sparked large-scale demonstrations in Baku. Huseynov claimed he was tortured while in custody.

Namizad Safarov, from the Committee Against Repressions and Torture in Baku, said on December 28 that whether Huseynov “was going home or preparing to stage a protest…that’s his right and the police have no right to interfere.”

Safarov said police appeared to confirm a confrontation of some sort in a subsequent statement.

An Interior Ministry spokesman on December 28 dismissed Huseynov’s accusations of police abuse as “untrue” and “false or fabricated.”

The spokesman suggested Huseynov was protesting for the release of Azerbaijani rapper Parviz Guluzade, known as Paster, who was recently sentenced to 30 days of administrative arrest for disturbing the peace.

“Huseynov and his supporters, in violation of public order, started shouting slogans…demanding the release of rapper Parviz Guluzade, who had been arrested according to a court decision,” the spokesman, Ehsan Zahidov, said, according to Trend.az, describing the events as having taken place at Fountains Square in downtown Baku late at night on December 27.

Zahidov said Huseynov and people with him were then removed after disobeying police who were trying to maintain public order.

“If someone later beat Mehman Huseynov, he can appeal to law enforcement authorities and the appeal will be duly considered,” the ministry spokesman said.

During his two-year incarceration on the libel charge, members of the Parliamentary Assembly of the Council of Europe (PACE), Human Rights Watch (HRW), other watchdog groups, and — in a rare singling out of “uncomfortable truths about the rulers of Azerbaijan,” The Washington Post Editorial Board — all demanded that Huseynov be freed.

He emerged from his imprisonment earlier this year speaking out for justice in a slain journalist’s case and vowing that he had “chosen the hardest path in journalism and will continue doing it until the end.”

[1] Azerbaijani rapper out of prison after scandalous clip taken down from internet ➤ https://jam-news.net/rapper-arrested-in-azerbaijan-for-criticising-bank-owned-by-first-ladys-family/[2] Azerbaijani Interior Ministry: Information about beating of Mehman Huseynov not true ➤ https://en.trend.az/azerbaijan/society/3170458.html[3] Opinion | A jailed blogger in Azerbaijan is on a hunger strike to fight bogus charges. He must be freed. - The Washington Post ➤ https://www.washingtonpost.com/opinions/a-jailed-blogger-in-azerbaijan-is-on-a-hunger-strike-to-fight-bogus-charges-he-must-be-freed/2019/01/05/06e6d57a-104f-11e9-84fc-d58c33d6c8c7_story.html[4] Freed Azerbaijani Blogger: I Will Continue 'Until The End' ➤ https://www.rferl.org/a/azerbaijan-blogger-mehman-huseynov/29799831.html