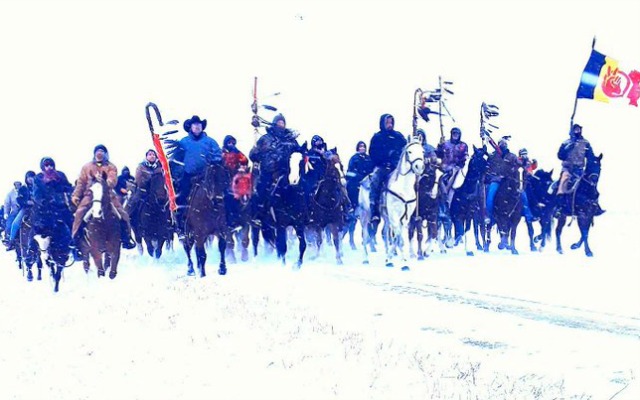 Each winter, Lakota ride for days in bitter cold from Standing Rock to Wounded Knee to honor those who died in the Wounded Knee Massacre. “We have a pervasive sadness,” says 99-year-old Marcella LeBeau, a tribal elder from Cheyenne River who served as a U.S. Army nurse during World War II. “Our people still remember.” Twitter photo. Front photo: Bradley Upton hugs a descendant. Reuters photo

Words Have Consequences Chapter 742: As racist slurs hang in the venomous air, domestic terrorists stab Jews, and a deranged IMPOTUS calls Democrats “rats” and the former president “Satan’s Muslim Scum,” we mark 129 years since the Wounded Knee Massacre, when after years of betrayals 300 Lakota Sioux women, children and elders were slaughtered by U.S. troops for the crime of being native  The day before, Lakota Chief Spotted Elk, or Big Foot, had urged his cold, hungry, exhausted people to surrender to soldiers hunting them down; when they finally agreed, he led them south, accompanied by soldiers, to Wounded Knee Creek on South Dakota’s Pine Ridge Reservation. On the morning of December 29, 1890, after a small, confused scuffle, the U.S. Army’s 7th Cavalry opened fire on the encampment of wretcheds huddled around fires. Many of those killed were shot in the back as they struggled to run away through the snow. When the first wounded were carried bleeding into a nearby church, wrote Dee Brown in “Bury My Heart at Wounded Knee,” Christmas greenery over the pulpit still proclaimed, “Peace on earth, good will to men.”

“I have never heard of a more brutal, cold-blooded massacre than that at Wounded Knee,” wrote Maj. Gen. Nelson Miles, an Army commander during the Indian Wars. Adding grievous insult to unholy injury, 20 “Medals of Honor” were later awarded to soldiers of the murderous 7th cavalry, who were cited for their “gallantry” and “bravery.” The massacre marked the end of decades of slaughter; after it, the U.S. government sought to solve its “Indian problem” through land theft, cultural eradication and forced assimilation of native children in military-style schools. In a formal apology in 1990, Congress expressed “deep regret” for the massacre, but offered no reparations. “History records the Wounded Knee Massacre was the last battle of the American Indian war,” wrote Levi Rickert, tribal citizen of the Prairie Band Potawatomi Nation and editor of Native News Online. “Unfortunately, it is when most American history books drop American Indians from history, as well. As if we no longer exist.”

“One of the curses of history is that we cannot go back and change the course leading to disasters,” writes Heather Cox Richardson. “But while we cannot challenge the terrible inevitability of the past, it is never too late to change the future.” In the long wake of this country’s last, worst act of genocide against those who were here before us, descendants on both sides seek to heal, forgive and move forward. Each year, dozens of native riders take to horseback for a days-long, bitter cold journey back to Pine Ridge, “circling in” to pray, come together, and remember those lost. There is also a growing  movement  to rescind those infamous Medals of Honor; the Remove the Stain Act recognizes the “depravity” of calling honorable the slaughter of sick, cold, hungry innocents. One of the Act’s supporters is Bradley Upton, a musician, Buddhist and great-great-grandson of Colonel James Forsyth, the U.S. Army commander at Wounded Knee, who has spent 50 years determinedly praying for forgiveness, offering apologies, seeking to heal and otherwise confronting what he calls the generational “karmic debt” from his ancestor’s crimes.

In November, as part of Native American Heritage Month, Upton attended an emotional gathering to speak with massacre descendants, and somberly, tearfully ask for their forgiveness. In a crowd torn between enduring anger and the need to confront it, Emanuel Red Bear, a teacher and spiritual advisor, told descendants they deserved and could accept Upton’s apology. “Only one man had a conscience enough to come here to ask for forgiveness for what his great grandpa did,” he said. “All of us have always been completely related. We have always been family.” Likewise embracing all, Remi Bald Eagle urged Upton, in the name of his own grieving people, to use his pain to work for a better future. “The loss of relatives who should be here with us haunts us in the grief and sorrow we carry with us, and in the shame, guilt and grief that you carry with you,” he said. “We cannot forgive you anymore than we can stop grieving. But you can use your words to address the wounds of history. Tell the truth of what happened and of who we are….Your voice can be a cannon, fired in the defense of truth.”

The frozen body of Chief Spotted Elk, known as Big Foot, who though weak and ill with pneumonia had desperately sought to save his people.