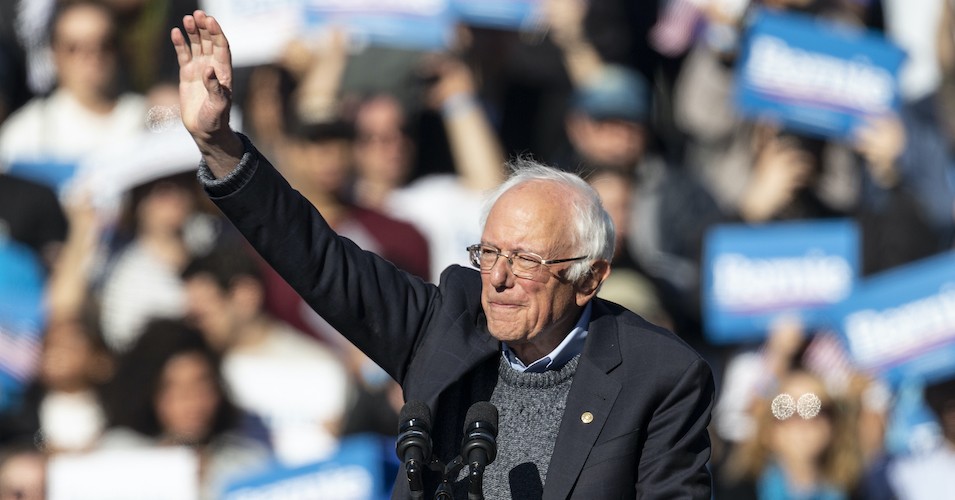 Sen. Bernie Sanders got some good news Monday as his campaign for the 2020 Democratic presidential nomination approached 5 million donations and, at an average of $18, looked set to end 2019 head and shoulders above his competitors for total money raised over the year.

“Bernie Sanders demolished all of the other candidates,” tweeted activist and Sanders surrogate Shaun King. “It’s not even close.”

The numbers came from New York Times reporting on the Democratic field’s fundraising for the end of the year. The Sanders campaign reported raising $26 million in the fourth quarter, putting the Vermont senator firmly in the top tier of candidates in the 2020 primary.

As the Times explained:

Mr. Sanders is expected to remain a financial pacesetter in the 2020 contest. He has about 1.6 million individual donations this quarter alone and is nearing a goal of five million total contributions. With an average donation of $18 for the year, and slightly less than that now, the numbers suggest he has already raised about $26 million in the fourth quarter—more than any Democratic candidate has raised in any quarter this year.

According to Times reporter Shane Goldmacher, extrapolating on the data in a Twitter thread, Sanders is on track to raise roughly $87.5 million by the end of 2019.

“His campaign said today he’s at 4.865 million donations for the year, with a previous disclosed average donation of $18,” tweeted Goldmacher. “That means he’s raised ~$87.5 million for the year.”

The campaign is hoping to hit 5 million donations by the stroke of midnight on New Year’s Eve, telling supporters in an email that they can donate as little as $2.70 to help the senator reach the mark.

“Our movement has all the momentum right now,” the campaign said in an email. “And reaching our goal of 5 million donations will ensure we continue to hold onto our momentum as we approach the Iowa caucus.”

That Sanders was able to raise at least $87.5 million without Super PACs, bundlers, and other forms of big money donations favored by rivals like former Vice President Joe Biden and South Bend, Indiana Mayor Pete Buttigieg, said HuffPost senior reporter Zach Carter, is an indication the senator is defying expectations and conventional wisdom.

“He out-raised literally everyone else in the field,” said Carter.

Here’s the fundraising story in 2019: The Democratic Party establishment assailed Bernie Sanders’ fundraising strategy as “unilateral disarmament,” and he out-raised literally everyone else in the field. https://t.co/E1GrcB0Hhm

The Sanders campaign on Monday released health information for the 78-year-old senator, showing him to be in excellent shape for his age.

“At this point, I see no reason he cannot continue campaigning without limitation and, should he be elected, I am confident he has the mental and physical stamina to fully undertake the rigors of the presidency,” Dr. Martin M. LeWinter, Sanders’ personal cardiologist, said in a statement.

Monday’s fundraising news came as Sanders supporters made #PresidentSanders the top trending hashtag in the U.S., tweeting their hopes for the accomplishments of the senator’s future presidency.

“It can happen,” tweeted filmmaker and Sanders supporter Adam McKay. “An actual President not owned by banks, oil or billionaires. A President not motivated by lining his own pockets. Free healthcare, a living wage, taxes on billionaires and corps, clean air and water… #PresidentSanders.”