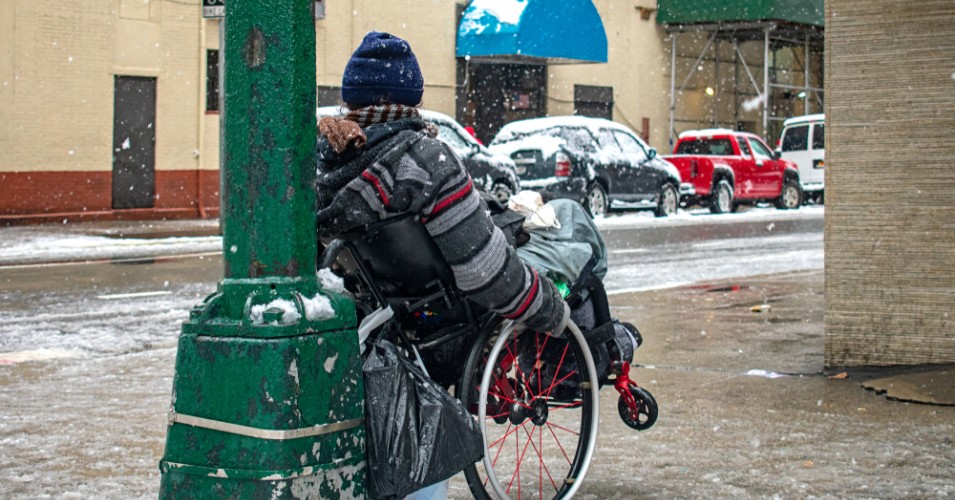 It’s been a brutal decade for homeless people in Canada.

In Toronto alone, approximately 3,000 more people are homeless than 10 years ago.

Shelters are full across the country. There are waiting lists for family shelters. Municipalities rely on motels for homeless families. Tent encampments are no longer just found in parks in major cities, like Vancouver’s Oppenheimer Park. Encampments can now be seen in London, Kingston and Peterborough.

In Toronto, tent encampments are no longer confined to the Don Valley Ravine or the Rosedale Valley. Encampments dot major thoroughfares. Tents and tarps are now high on the wish lists of outreach and shelter workers — and these supplies must be distributed surreptitiously so agencies do not lose their city funding.

In Windsor, Christine Wilson-Furlonger, a long-time outreach worker with a local outreach organization called Street Help, reports that homeless people are forced to hide in wooded areas. The city does not tolerate tent encampments. The organization’s outreach workers frequently help house families with young children when a family’s motel or shelter is cancelled.

Moncton has taken a zero tolerance policy toward tenting. The city removed an encampment this spring, displacing approximately 80 people who dispersed and are now living outside, less protected from violence or injury. Similar reports are common across the Maritimes.

Shelters face overcrowding and the new norm is a second tier of shelters with lower standards. In Toronto, these second tier sites are called 24-hour respite sites; some are in Sprung bubble dome structures that shelter people in conditions that resemble post-disaster scenarios. Deadly new disease outbreaks, such as Group A strep, have emerged in shelters. Meanwhile, bedbugs and lice have re-emerged with a vengeance.

New efforts to protect lives, like a teepee in Winnipeg and an army tent on church property in London, have been met with backlash from neighbours.

The number of communities without warming centres — notably Winnipeg, despite the efforts of activist Nancy Chippendale — is shocking, especially given new research that shows the impact of hypothermia and death at more moderate winter temperatures.

Ottawa cleared an encampment this year, despite the encampment receiving support from Leilani Farha, the United Nations rapporteur on the right to housing, and Alex Neve of Amnesty International. That eviction, ironically, took place a day after Ms. Farha left Ottawa for a Toronto speaking engagement.

The year ended in Toronto with 995 names on the Toronto Homeless Memorial. At the annual memorial on January 14, the list will hold more than 1,000 names.

Is there any hope on the political or advocacy front?

In December, Ottawa Councillor Catherine McKenney started a petition to declare an affordable housing and homelessness emergency, which she plans to present to council in early 2020.

In November, the Shelter and Housing Justice Network, a network of activists in Toronto, launched a petition letter to Mayor John Tory, demanding the mayor declare the city’s homelessness crisis an emergency. It has surpassed 20,000 signatures and is still growing. Toronto city council responded to this advocacy effort with a three-page motion, using the word “emergency” but failing to take action: “City Council recognize that homelessness in Toronto is an ongoing critical and emergency issue requiring the Provincial and Federal Governments to commit on an expedited basis to build on the initiatives the city has taken to date.”

Toronto has still yet to take any real action on homelessness. The city has not opened more warming centres, nor have city leaders put an end to the removal of outdoor encampments or invited the Red Cross to assist with warming centre operations.

In the absence of a fully funded national housing program, recovery-oriented models have failed. In 2020, community members and activist groups will need to push Canada’s municipalities to declare an emergency and take real action.