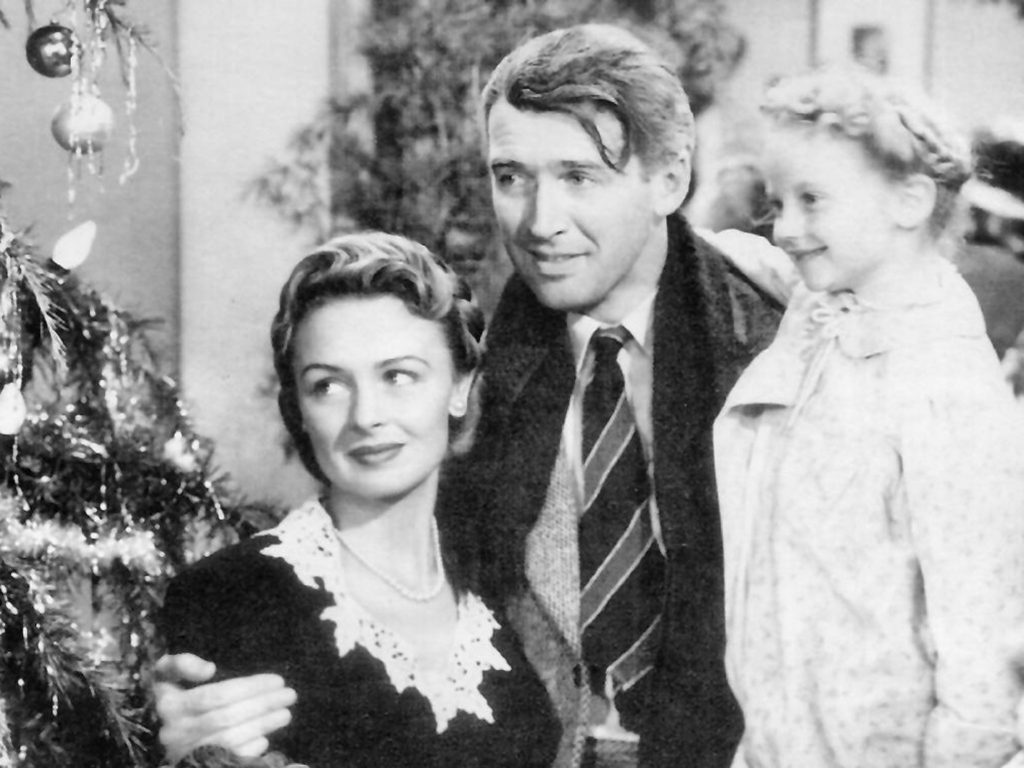 Certain Christmas songs have always made me cry. As a largely lapsed Catholic, Bing Crosby’s “Do You Hear What I Hear?” touches a nerve, John Lennon’s “Happy Xmas (War Is Over)” reminds me of the horror of combat, and after spending three holidays fighting in Afghanistan, any version of “I’ll Be Home for Christmas” is sure to release the waterworks.

Then there are the obligatory Christmas movies: “A Christmas Story,” “National Lampoon’s Christmas Vacation,” “A Christmas Carol,” even “Die Hard.” And while each evokes its own personal response, few have the power to unnerve like “It’s a Wonderful Life.”

The Jimmy Stewart classic must have played four or five times on Christmas day this year. I know this because we divorced dads (twice, in my case) often end up splitting our holidays and have a bit more time on our hands than is probably healthy. Now, I love old movies and music, which I credit to being raised by my own divorced parents. But this year, my father made a suggestion I won’t soon forget—to research Stewart’s war record and the emotional struggles he experienced during the period when he filmed “It’s a Wonderful Life,” his first feature film after some four years overseas. What I discovered will forever color the holiday for me.

Christmas can be a rough time for broken veterans. I can attest that we check on one another profusely, worry sick about our friends, drink a bit too much, and fear, deeply, that we might lose another mate to suicide. Post-traumatic stress disorder (PTSD) can be a lonely condition. Sometimes camaraderie and shared pain—even through historical example—is the only true comfort. Which brings me to Stewart.

Prior to the World War II, he had been one of Hollywood’s greatest leading men. Then he joined the Army , not long before the attack on Pearl Harbor. Stewart took commercial flying lessons beforehand so that he could fly bombers in the Army Air Corps. When a Hollywood executive tried to persuade him to avoid military service, the star of “Mr. Smith Goes to Washington” replied, “This country’s conscience is bigger than all the studios in Hollywood put together, and the time will come when we’ll have to fight.”

The military powers that be tried to shuffle him into the Air Force Motion Picture Division in the hopes that he would serve as a recruiting tool for the war effort. Stewart refused, instead demanding a combat assignment just like any other officer pilot. To state the obvious, it was a different time. Recall that more than 400 Harvard graduates were killed in the war, many of them volunteers. That’s almost as many as the number who graduated from West Point! Professional athletes served in combat, as did celebrities and the sons of famous politicians, including the Roosevelt and Kennedy boys.

That it’s unthinkable that military service today could include so many high-profile soldiers is an indictment of the prevailing national culture. America has been at war for almost 19 years now, a historical record, yet not one Bush, Obama, Clinton or Romney has served in one of these conflicts. A single pro athlete, Pat Tillman, enlisted after 9/11, served in Iraq and was then killed by friendly fire in Afghanistan. His singularity is as instructive as it is disturbing. Better to send young men and women to do the nation’s dirty work who are, statistically, more underprivileged, rural, Southern and likely to have a family legacy in the military. Such is Washington’s logic, and we are all complicit.

But back to Stewart. He wasn’t just a hero—indeed, he’d likely eschew the label were he alive today—but a symbol, a reflection of the lasting emotional trauma of combat. So I consider him my—and our—brother. The war aged, forever changed and nearly broke the man, but a  famous comparison photo tells the story better than I could. On the left, a pre-combat (1942) 2nd Lt. Stewart looks young, dashing and virile. On the right, a seasoned Maj. Stewart appears weathered and wrinkled, his eyes sunken and his hairline receding. A mere two years had elapsed; Stewart was just 36 years old in the second photo.

What had unfolded in the interim shocks the conscience of even a hardened soldier. One must remember that, unlike today, bomber crews over Germany had one of the highest casualty rates in the entire war. Stewart served in a B-24 bomber group, the 445th, and he was eventually appointed commander of the 703rd squadron, in no small part because of the number of senior officers it had lost. He flew an almost unthinkable number of combat missions, insisting that he fly with, lead and share the dangers of his subordinates. And though he was lucky enough to survive, Stewart did not escape the consequences of that deadly war in the skies. Indeed, it nearly destroyed him.

During an early raid on Bremen, the second largest port in Germany, a bomber of Stewart’s, nicknamed “Good ’Nuff,” was shot down. Out of a standard crew of 10, only three parachuted out. Stewart wrote a letter to the parents of the seven others, saying they were missing and presumed dead. Matters deteriorated from there. On one epic mission, 10 full crews under his command were blown out of the sky—130 men!—and Stewart effectively lost it. He went “flak happy”—a macabre reference to the shell shock of facing enemy anti-aircraft (“flak”) fire for too long. He was put on leave by his superior officers and sent to the “flak farm” for a leave of absence. The term didn’t exist back then, but what Stewart suffered from was a severe case of PTSD.

Stewart may have been temporarily grounded, but he was no coward. On the contrary, although he cared little for ribbons, he eventually was awarded the Air Medal with Oak Leaf Clusters, Distinguished Flying Crosses and the Croix de Guerre. Oh, but the toll. Always thin, Stewart lost so much weight under the stress of war that he eventually resembled a skeleton. When his mother, Bessie, and his father, Alex, saw him for the first time upon his return, they were “shocked by what they saw—their boy had aged what seemed decades.” He was just 37, but he looked 50.

After the war, Stewart knew it was time to get back to work, although for a time he questioned the “superficiality of Hollywood and acting in general.” Still, that was his trade and he needed a role, especially as younger leading men were beginning to take parts that would have once been his. He received shockingly few offers, as Stewart’s struggles were an open secret in L.A. Plagued by nightmares, he looked a mess, could hardly sleep and suffered from significant hearing loss. He also wrestled with the guilt of having killed civilians in bombing raids, including one instance in which his squadron mistakenly destroyed the wrong city. Today, experts refer to this phenomenon as moral injury; it’s a real thing, as this author can unfortunately attest.

Then the famed director Frank Capra—himself recently home from the war—offered Stewart the role of George Bailey in his new movie. Stewart initially balked. He hadn’t wanted to do a drama—having stated that he preferred his first post-war film be a comedy—much less a story that featured a suicidal protagonist. But when Capra reminded him that he had no other offers or options, Stewart acquiesced. The result was one of the most iconic films of all time and a Christmas staple.

By the standards of the day, “It’s a Wonderful Life” was a long, expensive and tortured shoot, with Stewart channeling all his rage, trauma, sadness, darkness. He became George Bailey, and audiences were transfixed. As Stewart’s biographer, Robert Matzen, said, “I don’t think he had that kind of capacity before the war. It enabled him to be ferocious and to have that raw emotion.” In a very real sense, the role provided Stewart with on-screen therapy—prolonged exposure treatment before such a term existed.

For all his pain, Stewart didn’t leave the military. He continued to serve until 1968, when he retired after nearly three decades of service. He flew his last bombing mission as Brig. Gen. Stewart in the Vietnam War. Stewart lived nearly 30 more years after his retirement, a full life indeed. Still, the Second World War never left the man; the pain haunted him for the rest of his life. “The nightmares come every night,” he recalled decades later, as they so often do for me and countless other post-9/11 vets. I’ve expressed my thoughts about World War II on numerous occasions for Truthdig, but whether Stewart’s fight was moral or not is ultimately beside the point.

Perhaps tens of millions of Americans watched “It’s a Wonderful Life” this Christmas season. Some cried, some laughed, while others likely snickered at its antiquated dialogue. No matter. All I ask is this: When you watch it next year, remember Jimmy Stewart’s undiagnosed PTSD and the persistent pain of so many today.