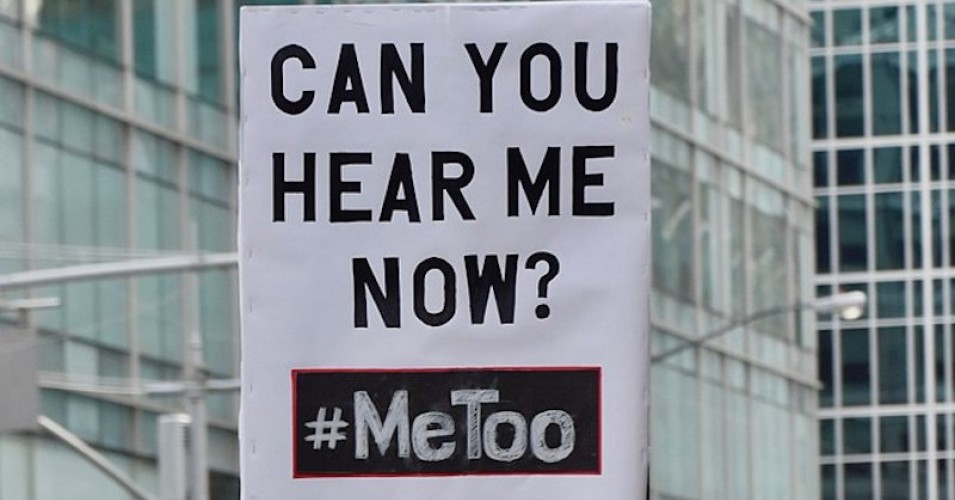 In 2009 — three years after I launched the organization The “me too” Movement — I met a 16-year-old girl who was enrolled in the ARISE academy in Philadelphia as part of my side gig running a small nonprofit, JustBe, Inc., which focused on the health and wholeness of young women of color through self-discovery, leadership development, critical media literacy and racial and gender justice training. Hers was a fairly new charter school, and the first in the country devoted to students in foster care and adjudicated youth; this particular girl had a two-year-old son and was pregnant with twins.

Her first child had been conceived as a result of being trafficked by a “friend” of her family who molested her for several years and convinced her it was a relationship; he was her mom’s age. When I met her, she was leaving school daily, being picked up and taken to New York to “dance” at a strip club and then driven back to Philly in the wee hours of the morning. She did her homework on the ride there and slept on the way back. A neighbor in the apartment she lived in — provided by the city’s Department of Human Services — watched her son when her mom couldn’t. She came to school only when she could, which put her in jeopardy both of being truant and of losing her benefits. She was also desperately trying to find alternate housing at the time because DHS rules said only two children were permitted to live in the apartment; the twins she was carrying meant she was about to have three.

She wasn’t the typical survivor I encountered, but she certainly wasn’t the only one experiencing that kind of abuse and exploitation. I spent weeks in 2009 trying to find resources for that child and eventually found something more suitable than the suggestion given by her caseworker (which was to give up one of her kids).

It took 11 more years and a community of folks who recognized that girls like her, as well as my work and the work of others like me, needed to be inserted into a global conversation about gender equity and sexual violence.

The young girls and women who were served by The “me too” Movement’s work in its early years look very different from the ones who many identify with the movement — or the hashtag — today. And before the last few years, it had felt like sexual assault survivors, supporters and activists had been screaming into the abyss for decades, waiting for the world to wake up.

But since 2017, that conversation has been carried farther and wider than we have ever seen in the fight to combat sexual violence. And, although we have yet to see sexual violence addressed as the global public health crisis it is, we have to acknowledge that we are louder, stronger and braver now than we’ve ever been.

A decade ago, I could see the impact JustBe and The “me too” Movement were having on the lives of the girls with whom I worked. It was challenging to find the means to sustain this organization and expand our reach. And I wasn’t alone: I knew many other women who were were trying to interrupt sexual violence in their communities with little to no support, while organizations such as A Long Walk Home in Chicago and Girls for a Change in Virginia helped find resources from any and everywhere. It didn’t deter us; we were committed to this work.

We knew that sexual violence wasn’t plaguing only our communities; sexual violence is a global problem, doing harm to people in nearly every community. However, the challenges we faced as women of color to raise awareness and undo the pathologies that allowed this harm to take place were compounded by our marginalized identities and lived experiences.

This past decade brought about shifts in societal consciousness, culture and policy — the kinds most people thought weren’t possible in our lifetime. At critical points of forward movement, however, comes pushback, threatening to undo all the accomplishments we’ve struggled to achieve.

For instance, Americans experienced most of the two terms of the nation’s first Black president, and then the most divisive election in our lifetime, resulting in the election of a self-proclaimed sexual assaulter. We saw anti-capitalist demonstrations spearheaded by Occupy Wall Street and protests that resisted racism and exploitation, often under the umbrella of Black Lives Matter, sweep across the country. But we also witnessed way too many Black lives be taken without explanation or recourse, and mass incarceration rates remain at sky-high levels.

Even as the #MeToo hashtag was trending, Black women and girls were (and are) going missing from their neighborhoods at alarming rates and it seemed no one was looking for them, while some of our most powerful celebrities and public figures continue to profit from the very audiences they harm.

I see both the ongoing injustices and the various movements for change as connected and intertwined; we had enough of the status quo and we were going to make real change happen. Survivors have not only been on the front lines of these historical moments, but they simultaneously endured re-traumatization and erasure within these movements.

It addresses sexual violence as a systemic issue — and it explains how other systemic issues, such as anti-black racism, capitalism and classism, poverty and housing impact survivors. It also provides space for survivors to lead us in the right direction.

The “me too” Movement is an iteration of a decades-old fight to end sexual violence, but what makes it so different, powerful and effective is that it speaks to the needs of all survivors. It addresses sexual violence as a systemic issue — and it explains how other systemic issues, such as anti-black racism, capitalism and classism, poverty and housing impact survivors. It also provides space for survivors to lead us in the right direction.

But we can’t stop now. Today, the criminalization of sex work, strict abortion laws and a lack of protections against trafficking seek to punish women for merely surviving. Rape kit backlogs, the gender pay gap, and this administration’s dismantling of Title IX protections for students facing sexual violence and workplace sexual harassment have weakened accountability measures and will keep predators in power. Climate change, unjust immigration laws and even potential unemployment breed all forms of gender-based violence.

These correlations are not anomalies anymore; instead, the intersections are becoming part of the mainstream consciousness, thanks to the incredible collective work of influencers and activists working to advance missions, such as Time’s Up, the National Women’s Law Center and the National Domestic Workers Alliance. Cross-movement alliances have applied political pressure to change laws and place the onus for systemic change back on the powerful — where it belongs.

And at the same time, we have to acknowledge that those on the margins of movements — Black, brown and indigenous women and girls, trans women and gender nonconforming survivors — are still organizing and fighting for their right to live with dignity and be protected. We still live in a world that demonstrates that, unless you have access and privilege, your right to heal is subjective.

I still carry the stories of Black women and girls from my days of running JustBe, Inc. and am constantly receiving new ones, like the story of Chrystul Kizer, the 17-year-old Black girl charged with murdering a man whom police were investigating for sex trafficking — including of her. I hear the same fear and fire in the voices of those who disclose their survivor status to me when I’m out speaking in front of large audiences. I know our victories and our tribulations intimately because, just like the millions of us who get up and make a conscious effort to survive each day, I too am impacted by every headline, every testimony and every judicial decision. At every turn, I’m ready to be both affirmed and aggravated, but never apathetic.

As we enter the next decade, I want us to all find our place in the movement to end sexual violence, because we all have a role to play. I look forward to knowing that the movement doesn’t rely on the level of celebrity and notoriety of the accused or accuser, but that it instead builds on the changed thinking, behavior and solutions created by those most impacted.