Over the last decade, a national consensus has developed for a progressive left agenda on the economy, social services, the climate crisis and ending wars but the movement has not yet built the power to make that a reality. The next decade will be ripe with opportunities for transformational change due to a combination of expanding popular movements as well as escalating crisis situations.

Positive change will only occur if these movements evolve into an organized popular movement that truly represents the people’s interests against the elites. The movement must protect the planet at this critical time of climate crisis against the profiteering of the planet-plundering capitalist class. We must stand against continued militarism, bloated and wasteful weapons spending, military conflict and regime change imperialism.

The movement must be clear about which side we are on, the people’s side, put forward a vision of a future that draws the masses — including members of the power structure — and be organized to fight for our vision. 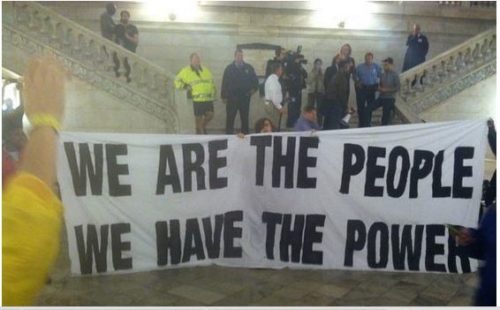 People have the power; protest in Ferguson City Hall in 2014.

We Have Built National Consensus

Since the Occupy-era of 2011, the movement has grown, not disappeared as many in the media would lead you to believe. People have been working more deeply on multiple fronts of struggle building national consensus.  Below we review some key issues where consensus has been achieved but where we still need to build the power to enact change. 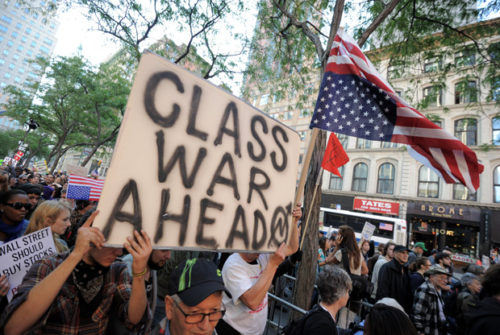 The Occupy Movement highlighted the 99 percent vs. the 1 percent. It was a class war, out in the open, with the people fighting back for the first time in decades. The US has become one of the most unequal societies in history resulting in movements against inequality growing. There is now support for taxing the wealthy with Gallup data showing that 62 percent of people in the US say “upper-income people” pay too little in taxes. Further, 69 percent say that corporations are paying too little in taxes. Other polling shows that over three-quarters of US workers believe that CEOs make too much and that about the same percentage of all people (74 percent) say that CEOs are overpaid.

The support for progressive policies confronting inequality is expressed not only in the campaigns of Bernie Sanders and Elizabeth Warren but even Joe Biden, a corporate centrist Democrat, has had to at least rhetorically agree, saying: “Economic inequality is pulling this country apart. We need stronger labor laws and a tax code that rewards a middle class that’s been cut out of decades of economic growth — not just the wealthy, who have gotten too many tax breaks for too long.” And, Donald Trump won the election in part by playing to the economic insecurity of working people, unfair corporate trade and against the elites in DC.

Despite this, over the last decade, the wealthy have benefitted under Democrats and Republicans, while the workers have struggled. Donald Trump and the Republicans have put in place the most regressive tax policy in US history. Last year, ninety-one Fortune 500 Companies paid $0.00 in federal income taxes.  Over the last decade, the 400 wealthiest people’s fortunes doubled while tax rates dropped. This has led to the unjust reality that the 400 richest US families paid a lower tax rate than working people. When looked at through a racial prism, inequality is worse than it was in 1979, when it was already a crisis. This is not just Trump, the wealthiest have not paid their fair share in decades. For workers, a so-called booming economy has meant more bad jobs and a faster race to the bottom.

In the last year, the world’s 500 richest people gained $1.2 trillion in wealth. Sam Pizzigati writes if we confronted inequality and put in place policies like Japan, the third wealthiest country in the world, the median net worth of people in the US “would triple, from $66,000 to $199,000.” We need to build political power to create a more fair economy. The Next Systems project highlights some of the places where that is happening.

Nurses, doctors, and medical students demonstrated outside the annual meeting of the American Medical Association in Chicago on Saturday, demanding the group “get out of the way” in the fight for a Medicare for All program. (Photo: National Nurses United/Twitter)

Putting in Place Improved Medicare for All

Another issue that has popular political support and is a top concern of people is the crisis in US healthcare. National Improved Medicare for all has transformative potential that will shrink inequality and cut poverty by 20 percent while providing high-quality healthcare to everyone.

The scam of the Affordable Care Act formalized an unequal health system, giving names to inequality — platinum, gold, silver, and bronze plans — while giving hundreds of billions of dollars in subsidies to the corrupt insurance industry and allowing pharmaceuticals and hospitals to charge exorbitant prices. Although the power structure has tried to confuse the issue, polls show majority support for ‘Medicare for All’ even when they say it will replace private plans. No poll accurately describes improved Medicare for all as cutting healthcare costs for people or says that people will never lose their healthcare again, instead, the media and bi-partisan insurance-funded politicians spew false information. Improved Medicare for all has gone from a pipe dream to mainstream as the movement has made the issue a litmus test for their presidential nomination with 84 percent of Democratic voters saying it is a priority issue.

No matter who is elected, the improved Medicare for all movement will need to continue to build its power. The insurance industry and others who profit from the status quo are resisting change in a classic battle of corporate money vs. the people. The single-payer movement has a strategy to win and has successfully turned attacks against those who oppose us. If we continue to organize, Medicare for all has the potential to become an unstoppable political issue. 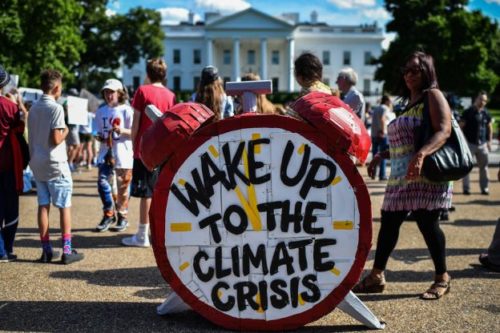 WASHINGTON, DC – JUNE 1: A replica of a clock is seen at Lafayette Square as people gathered to protest President Trump announcement that U.S. will pull out of the Paris climate agreement on Thursday, June 1, 2017 in Washington, D.C. (Photo by Salwan Georges/The Washington Post via Getty Images)

The last decade was the Earth’s hottest ever, marked by extreme storms, and deadly wildfires. Thousands of scientists have been issuing emergency warnings about irreversible changes as they see tipping points are approaching with frightening prospects, especially for those who are young and will live through escalating storms, floods, droughts, fires and more.  Youth rank responding to the climate crisis as the most vital issue of our times.

Despite this, the staggering failure of political leadership continues as we saw at the most recent UN climate meeting. The crisis emanates from the US where two-thirds of new oil and gas is produced. Failed bi-partisan US leadership on the climate crisis makes resistance imperative. People have been responding in the US and globally with escalating protests including days of action involving the largest protests ever involving more than six million people. Now we need to move from protest to power.

Responding to the climate crisis requires major transformations in the US economy as multiple sectors — energy, transportation, housing, manufacturing, agriculture, banking, among others — will have to transition. There is a growing understanding of what needs to be done with the most detailed plan coming from Green candidate, Howie Hawkins’ ecosocialist Green New Deal. Last week, Stanford researchers put forward Green New Deal plans for 143 countries. Here are ten immediate steps for the next president.

We need to defeat the illusion that corporations and corporate governance can solve the climate crisis. Once again, it is a battle of the people vs. corporate power. To save the planet we must overcome the ruling elites. 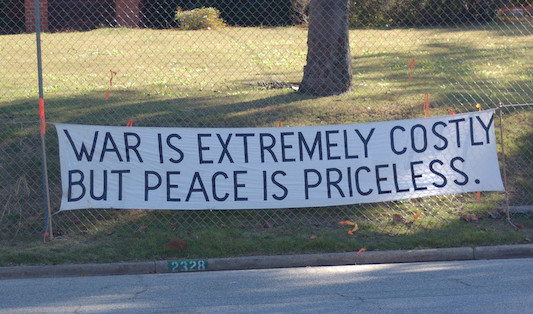 US militarism is exacerbating the climate crisis. While we can’t confront climate change while lavishly funding the Pentagon that is not the only reason to end US militarism.  The recent release of the Afghan Papers showed us that the longest war in US history, Afghanistan, has been a lie. Pentagon spending, now over 60 percent of discretionary spending, has been escalating for decades and most recently a record bi-partisan Pentagon budget was passed while the people were distracted with impeachment.

The US military is planning a war with China. NATO is looking for new enemies to justify its existence and the US is expanding its weapons race to outer space. While human needs go unmet and underfunded, the military is given a blank check despite failing its only financial audit.

It is not only wars and militarism that must be dismantled, but the US foreign policy of domination and empire must come to an end. This includes regime change campaigns as currently being attempted in Venezuela, Iran, and Bolivia, and recent years in Nicaragua, Ukraine, and Syria. The illegal use of unilateral coercive measures, which the US calls sanctions but which are another form of war, kill tens of thousands annually.

US empire is failing. It has resulted in militarized police and led to racist police killings. The movement to end war is growing and having victories like stopping the Trump military parade but we need to put forward a vision for a peace economy that ends the era of global military bases. A better jobs program than the military is putting in place a Green New Deal, building urgently needed housing, remaking infrastructure and providing for human needs. The era of wasteful spending on a bloated and unnecessary military must come to an end. 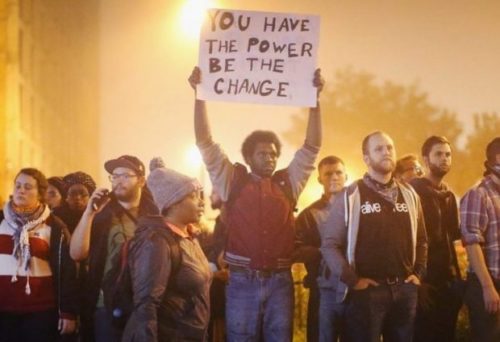 An Era of Transformation is Upon Us

These are just some of the issues where consensus is being achieved and where change is urgently needed. Crises are resulting in movement building over the resurgence of racism, racist mass incarceration and drug wars as well as police violence in black and brown communities, the mistreatment of workers leading to record days on strike, the crises in homelessness, poverty and housing, deep student debt, environmental degradation beyond the climate crisis, and the crisis in US democracy, are some others.

One could look at today and be depressed at seeing no opportunity for change. In reality, these crises are opportunities for transformational changes to build a better world for ourselves and future generations. This contradiction is highlighted in a recent dialogue between long-time activist George Lakey and a young organizer Yotam Marom. Marom had a hard time accepting Lakey’s claim that “There’s no other time I’d rather be alive.” Lakey explains why we are in a better position than movements were in the 60s and 70s to make deeper transformational change. He sees current polarization as an opportunity, as well as the issues discussed in this article, the state of the movement, training available to activists and how crises will force change. Of course, there is no guarantee regarding our success but there is potential — potential we can realize.

We are building toward being a movement that can make transformational changes over the next decade. There are opportunities to organize in our communities, connect with others throughout the country and around the world. The potential of a movement of movements linking issues that seem unrelated is being realized. We are building solidarity from person-to-person across movements and across borders. Together we can build the power to create a new world.