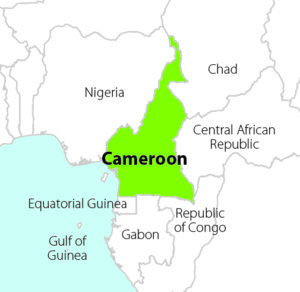 On an ugliness scale of one to ten, if the U.S. Guantanamo prison is 7, the French military in Algeria 8, Pinochet’s controls of Chile 9, and the Inquisition 10, the severity, scale and number of Cameroon military human rights violations is possibly 4 and a half. Still, is the suffering of any victim ever forgotten.

The Republic of Cameroon continues to endure a low intensity conflict with its English minority. After Anglophone attorneys struck for better legal and civil rights in 2016 and were joined by teachers and students, there were arrests and some expectable government-initiated violence. The movement rekindled historical grievances and spread. In Anglophone regions armed militia began attacking government facilities and closing schools, kidnapping uncooperative teachers and students while the government military responded as militaries do. There are alleged war crimes by both sides.

English and French are languages imposed by colonial rule and an addition to the peoples’ tribal languages and vernacular pidgeon. The conflict of “English” and “French” concerns who controls the money, jobs, schools, laws. To some degree it is a conflict between power elites. It’s certainly of no help at all to the half a million Anglophones who have fled from their homes and are internally displaced. This is not a freedom struggle.

With the world public aware of the military’s human rights violations Cameroon’s President Biya (democratically elected by a substantial majority), was persuaded to negotiate with the Anglophone leaders. Anglophone militant leaders finding support outside the country speak with an authority that exceeds the power and numbers of their constituencies. An Anglophone secessionist state of “Ambazonia” has been declared on the border of Nigeria and includes Cameroon’s only oil refinery which is currently inoperable. The local militias do not want “their” oil sold by the state. Ambazonia’s militias and enforcers, the “Amba boys” are generally feared. A diverse rebel military is at war with Cameroon’s military.

Ambazonia is also likely to include the Bakassi peninsula oilfields, a resource rich section of coast abutting Nigeria assigned to Cameroon by the International Court of Justice in 2002 and with its own history of attempted secession (“The Republic of Bakassi”). The Peninsula had its own armed resistance movements. Negotiations between Nigeria and Cameroon were able to avoid war in 2006. The Peninsula’s Anglophone fishing people remain Nigerians but under the caretaking of Cameroon. Cameroon’s exploration and development of the Bakassi oilfields relied on the use of the country’s only oil refinery (Cameroon is the 12th largest African oil producer, Nigeria the first) it is quite possible that the current struggle for Anglophone rights has more to do with international oil interests than Cameroon’s languages.

President Biya’s efforts to appease the Anglophone cause include freeing many political prisoners as well as a willingness to negotiate anything but the breakup of the country. He has encouraged negotiations in preference to using military force. But the twenty percent Anglophone minority leadership is increasingly intransigent. Militant Anglophone forces have refused to negotiate without additional conditions, the freeing of leading political prisoners and withdrawal of Cameroon’s military forces from their regions. Now the government has passed legislation assigning the two predominantly Anglophone regions of the country “special status,” addressing issues of the judicial and educational systems raised by the strike, placing these and control of the regions’ cultural life in Anglophone hands. Anglophone militant leadership rejects the new plans saying it wants nothing less than full independence as initially represented by the declared state of “Ambazonia.” This would grant it control of and profit from sale of oil. This position makes negotiations difficult and is only tenable with foreign country support.

To the far North the Cameroon military tries to improve its response time as villages are attacked by Boko Haram raiders, from Nigeria usually. Following the killing of New Testament translator Angus Fung in Wum last September, Benjamin Tem was killed in his home October 20. Both were involved in the project of translating the New Testament into the northern Cameroon language of Aghem. In December by the 17th, Boko Haram killed seven Camerounais Christians and took twenty-one boys and girls age 12 to 21 prisoner. Last November 6, Boko Haram attacked a Christian church in Moskota killing a former pastor and a deaf child. Others escaped as the church was destroyed. Much of the village was burned after its food supplies were removed. The motive for the Boko Haram attacks is guessed to be part of a program to eliminate Christians and so move the region toward the rebirth of the Sokoto Caliphate which the British destroyed some centuries ago. Boko Haram is also attacking Christians in neighboring Nigeria and Chad.

Christians in the region are under a threat of genocide which NGO reports on human rights violations in Cameroon strangely but consistently ignore. Fortunately the government is making some effort to protect Christian villages. And there is a U.N. presence. Despite Anglophone leadership’s orders to close schools, UNICEF reports that school attendance for students in the Northwest and Southwest (Anglophone) regions increased from 4% last September to a current 38.49%, while teachers working rose from 2% to 30%.

The gears of very large machinery are turning but risk crushing the lives of the Anglophone community.

To remember accounts of the 1994 genocide in Rwanda, General Romeo Dallaire would write of the “third force” moving among the catastrophic events. There are accounts of militia away from the cities, young men with new cellphones, modern communications and functioning cellphone services.

Several other things seem strange or out of place here. The Anglophone diaspora’s representatives are well connected. With exception the wealthy and privileged are allowed to become the diaspora while a low income and oppressed population stays at home or joins the half a million current refugees in Cameroon.

The human rights atrocities of the Eastern Congo took many years to be noticed by the world public while millions died. In Cameroon alleged human rights violations have been raised repeatedly with a death toll of three thousand since the attorney strike of 2016. The U.S. cut military aid to Cameroon’s armed forces due to reports of human rights abuses. This may have simply been an excuse as part of the professed U.S. policy change to withdraw troops throughout the continent. Some Anglophones attempt to blame government forces for the destruction of government built hospitals and schools. In poor communities people are not likely to burn their own hospitals, or schools, or community centers. These policies are made by the elite. Anglophone leadership has forbidden state education to proceed and so closed down regional schools damaging a generation of Anglophone youth. Any teachers and students standing for their right to education are endangered.

When a government hospital serving an Anglophone region is burned down, the report goes into a file collected by a University of Toronto’s “Database of Atrocities on Cameroon’s Anglophone Crisis,” as in the instance of the burning of Muyuka District Hospital at the end of March: the event is verified by the database which avoids assessing responsibility for this attack. The report’s material unrealistically accuses the “terrorist Republic of Cameroun military.” Reports of atrocities are submitted anonymously. Toronto teams in this effort with a variety of English, U.S. and former Commonwealth universities. Not one of them is Francophone.

This kind of information collection is usually the domain of the United Nations. It is unclear just who will control or censor the data collected by the University of Toronto. The public will have access to news reports from global media sources such as Deutsch Welle and Voice of America. For instance, currently the Separatists are kidnapping election candidates for government positions in Anglophone areas. Neither corporate media nor NGOs point out that there is no indication at all of consensus or democracy in the management of the Anglophone policies.

An important information source for troubles in Cameroon is the International Crisis Group, providing verifiable information with good depth, continuity and minimal slanting, except in the areas it neglects, such as tribal identifications or factors of income. Its faults as an information source reflect the wealth of its donors (such as Canada, France, the Henry Luce Foundation, Rockefeller Brothers Fund etc.), and lack of noticeable African representation.

In a previous essay, I’ve noted the extensive joint report of Canada’s Centre for Human Rights and Democracy in Africa & Raoul Wallenberg Centre for Human Rights. The report discusses the crisis in Cameroon as if unaware of the country’s war with ISIS and the government’s attempts to protect the Christian villagers from slaughters by foreign forces. The report provides a source for the International Crisis Group as well as Lawyers Rights Watch Canada which I’ve resigned from to maintain impartiality. The CHRDA founder, an attorney among those initiating the Cameroon Anglophone lawyers strike of 2016 which precipitated the current struggle for Anglophone Independence in Cameroon, spoke for Lawyers’ Rights Watch Canada, in General Debate at the UN Human Rights Council, September 13, 2019.

I find LRWC’s recent “Cameroon: Open Letter to President Macron about Human Rights Abuses in Cameroon” unwise in attributing to France the power to arrange Cameroon’s submission to Swiss-led talks. It denigrates African independence and is a disingenuous request since objections to any serious negotiations rest with the Anglophone leaders. A line — “We trust that France does not want to be complicit in another genocide in Africa after Rwanda” — is ominous. The letter is signed by fifty primarily Anglophone experts on genocide and human rights, and NGOs, of various stature and weight including Lawyers Rights Watch Canada.

With a thought to history, in the 1961 UN administered plebiscite of British Cameroons the south voted to join what is now the Republic of Cameroon. The north which was heavily Muslim, voted to join Nigeria. Some attributed the vote in the south to the people’s difficulties in getting along with the Igbo peoples who lived on the Nigerian side of the border. In the late Sixties, the forced or contrived secession from Nigeria of the Igbo state of Biafra was attempted, right across the border from the Anglophones’ current creation of “Ambazonia.” Biafra’s formation and secession as an independent state led to the deaths of possibly two million Biafrans by the extremes of starvation. The British as primary supporters of the victorious Nigerian government were vulnerable to charges of genocide. France’s interests generally supported Biafra. I think the Anglophone minority in Cameroon is much too small a minority to risk such adamant stands — without substantial foreign support. So this attempt at secession should be looked at very carefully. If you consider what the ‘game plan’ of the major powers is with yet another resource-rich sliver of Africa, and what the independence of an Anglophone region could mean for the lives of its people, the amount of pure hatred for Africans is astounding.

A genocide warning continues then for the Anglophone population of Cameroon. Their adversary isn’t necessarily the Francophone government but rather a consensus of non-African states, corporations, individuals, motivated by greed or the arrogance of technological superiority (perhaps these have become the same), who have openly and covertly managed country after African country into the abyss of insecurity, conflict, loss of life, to be followed by corporate pillage.