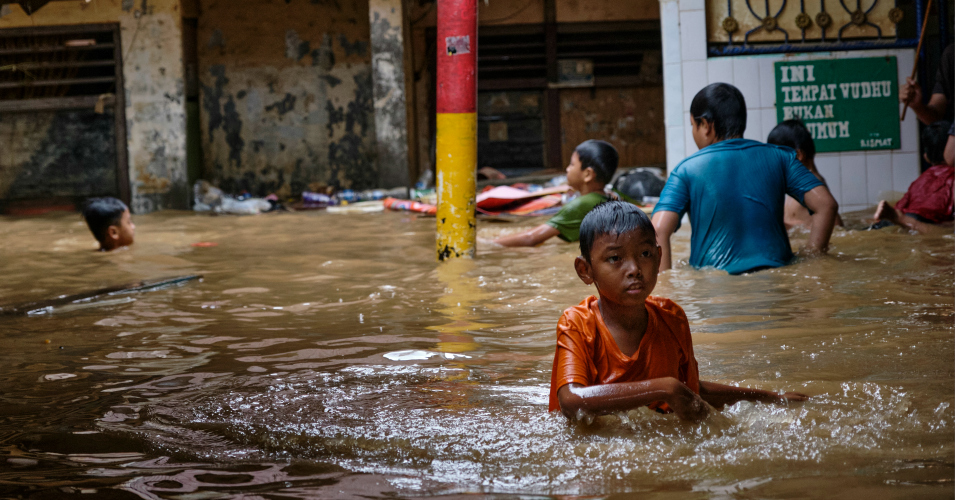 Indonesian officials announced Thursday that at least 30 people have died and more than 35,000 others have been displaced in recent days due to severe flooding from record-setting rainfall in and around Jakarta, the Southeast Asian country’s capital and largest city.

Flooding in the Jakarta metropolitan area, home to more than 30 million people on the island of Java, was the result of intense rain that began late Tuesday and continued Wednesday. The Associated Press reported Thursday that “monsoon rains and rising rivers submerged at least 182 neighborhoods in greater Jakarta starting Wednesday and caused landslides in the Bogor and Depok districts on the city’s outskirts.”

“At their peak, the floods had inundated thousands of homes and buildings, forced authorities to cut off electricity and water, and paralyzed transport networks,” the AP added, citing Agus Wibowo, a spokesperson for Indonesia’s National Disaster Mitigation Agency. “Floodwaters reached as high as 2.5 meters (more than 8 feet) in places.”

Wibowo confirmed the death toll had hit 30 while Jakarta Gov. Anies Bawesdan said that about 5,000 people remained in temporary shelters.

Although according to Jakara’s governor much of the water had receded by Thursday evening, the extreme weather endured by the region continued to make headlines worldwide and garner attention from journalists, activists, and policy experts, who highlighted the record rainfall.

The Meteorology, Climatology, and Geophysics Agency (BMKG) recorded rainfall intensity on New Year’s Eve at 377 millimeters [14.8 inches] per day, according to an observation conducted at Halim Perdanakusuma Air Force Base in East Jakarta.

Meanwhile, observations at Taman Mini Indonesia Indah, also in East Jakarta, and Jatiasih in Bekasi recorded rainfall intensity at 335 and 259 millimeters [13.2 and 10.2 inches] per day, respectively.

BMKG, which has forecast heavy rain through Saturday, said in a statement that “the rain falling on New Year’s Eve in the western and northern parts of Java was very extreme and triggered floods in [Greater Jakarta] and Cikampek [in West Java]. This rain is not ordinary rain.”

Photos and videos of the flooding and subsequent evacuation efforts that involved about 120,000 rescue workers circulated on social media throughout Wednesday and Thursday. Along with footage of rescuers using life jackets and boats to help Jakarta residents to safety, short clips showed a baby placed in plastic bin and an elderly man on an inflatable mattress to escape floodwaters.

Arviqo Alif Ardana, a 16-year-old high school student, was among those killed in the floods. His father, Al-Latif Ilyas Darmawan, reportedly said that “I did not know what had happened until his younger brother came and told me that his brother had died and when I came to the scene, people said that my child was electrocuted when he was holding a lamp post and tried to be rescued by local residents (but failed and died).”

In addition to killing dozens and displacing tens of thousands of people, the flooding shut down Jakarta’s Halim Perdana Kusumah domestic airport, stranding about 19,000 passengers.

The New York Times noted in its coverage of the flooding Thursday that “about 40 percent of Jakarta lies below sea level, and the authorities have tried for years to alleviate flooding. Ordinary rains can swamp neighborhoods, as illegally dug wells and climate change have caused the city to sink faster than any other big city in the world.”

In response, as the AP reported, Indonesia President Joko Widodo announced in late August “that the country’s capital will move from overcrowded, sinking, and polluted Jakarta to a site in sparsely populated East Kalimantan province on Borneo island, known for rainforests and orangutans.”

According to the AP‘s August report, “infrastructure improvement has been Widodo’s signature policy and helped him win a second term in April elections.” In a series of tweets Thursday, the Indonesian president said construction of flood control infrastructure around Jakarta “has been hampered since 2017 due to land acquisition issues.”

Widodo has repeatedly turned to Twitter in recent days to share updates about the flooding and rescue efforts. Greenpeace Indonesia reponded to one of his tweets from Wednesday with a call for climate action.

The local chapter of the global environmental advocacy group demanded a transition to renewable energy and efforts to protect Indonesian forests “in accordance with the advice of world scientists,” and warned that “otherwise disasters like this will only become more frequent and worse.”

In the wake of the flooding, other groups and individuals within Indonesia and beyond its borders also used Twitter to raise alarm about the global climate emergency and urge the Indonesian government to pursue systemic reforms to address it:

Spent the first day of 2020 contacting friends and host family in #Jakarta who are facing catastrophic floods. At least 21 people have died, and 30,000+ are homeless.

Every day, the climate crisis threatens our loved ones. This is the decade we fight like hell for each other. pic.twitter.com/5tFiB0xphv

“As they enter 2020, thousands of people in Jakarta are evacuating their homes because of flooding,” Green New Deal U.K. tweeted Wednesday. “In a world divided by inequality, it’s the most vulnerable who are already bearing the greatest burden of the climate crisis. Green New Deal now.”