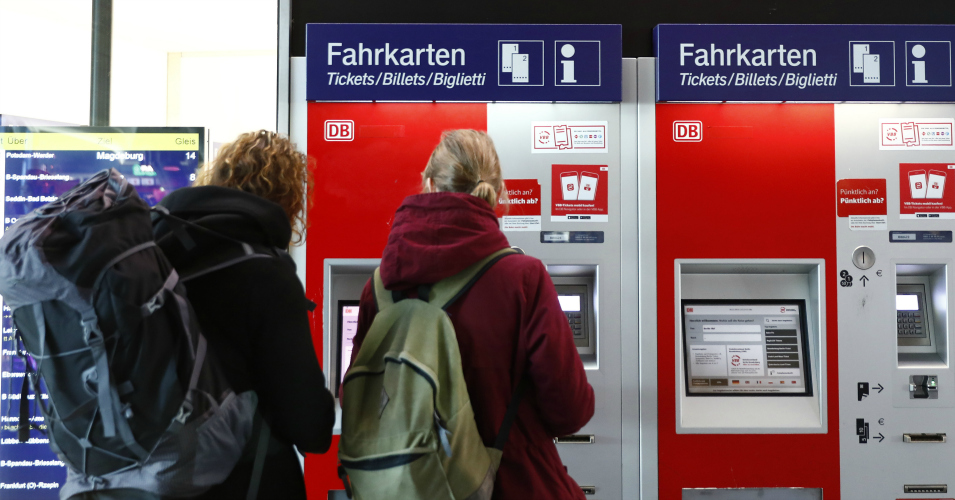 In response to a tax cut included in the German government’s climate package, state-owned railway company Deutsche Bahn kicked off 2020 with a 10% decrease for long-distance train fares—a move which has drawn comparisons to the United Kingdom, where millions of commuters are now grappling with a 2.7% price increase.

Deutsche Bahn’s new rates for certain tickets, special offers, and additional services come after German lawmakers voted in December to slash the value-added tax (VAT) on rail travel from 19% to 7% in hopes of curbing planet-heating emissions from transportation by encouraging more people to take trains.

“Rail travel in Germany, where much of the track is electrified, produces significantly less carbon dioxide per passenger kilometer (mile) than conventional road transport,” the Associated Press explained when German lawmakers approved the tax break last month. “The country has a well-developed rail network with high-speed connections between most major cities and to neighboring countries.”

The German railway company reportedly expects its new prices to attract at least five million more customers this year. For now, its fare reductions only apply to trips that are more 50 kilometers (31 miles) for which passengers travel from one railway region to another.

“Deutsche Bahn has pledged to also cut prices for the over 50-kilometer trips within the same railway region, but this change will only be introduced in another six months,” German broadcaster DW reported Wednesday. “The company head, Richard Lutz, said Deutsche Bahn would not directly collect any profits from the tax cut and instead pass on any savings directly to ticket buyers.”

Although Deutsche Bahn aims to benefit and bring in more customers with the rate reductions, the company is not without its issues. As DW detailed in February 2019, “Deutsche Bahn has been targeted for its service delays, high and inflexible ticket costs, and a lack of investment. Now it is having trouble finding drivers for its trains.”

But even with the German company’s operational issues, reporting on the lower rail fares has led residents of the U.K. to express frustrations about train ticket prices rising in their country in the new year.

“Welcome to another decade of misery for rail passengers,” Bruce Williamson of the U.K. nonprofit Railfuture declared Thursday. “How on earth is the government going to meet its climate commitments by pricing people off environmentally friendly trains and on to our polluted and congested roads?”

“The rise, announced by industry body the Rail Delivery Group in November, is lower than the 3.1% increase at the start of last year,” reported BBC News. “But many commuters face an increase of more than £100 for annual passes.”

Referencing the changes in Germany, McDonald also said, “It shows that this government is not serious about supporting either public transport or tackling climate change, road congestion, or air quality.”

In a pair of tweets Thursday, the Bath Labour Party highlighted train fare rises under the Tories since 2011.

Despite the comparisons made by U.K. residents and politicians on social media, the Guardian noted Thursday that “not all commuters in Germany will get cheaper fares in 2020. Fares for short-distance travel and public transport in regions such as Berlin, Hamburg, Bremen, Brandenburg, and the Rhineland are set to increase, the news agency dpa reported this week.”

“Fares for regional trains in the Bonn area are due to rise by 2.5%, while people in Berlin and Brandenburg face a 3.3% increase in the cost of tickets for bus, tram and subway travel,” the U.K.-based newspaper explained. “Public transport providers say the fare increases are due to rising wages and higher prices of diesel and electricity and were agreed before the government passed its climate protection measures.”