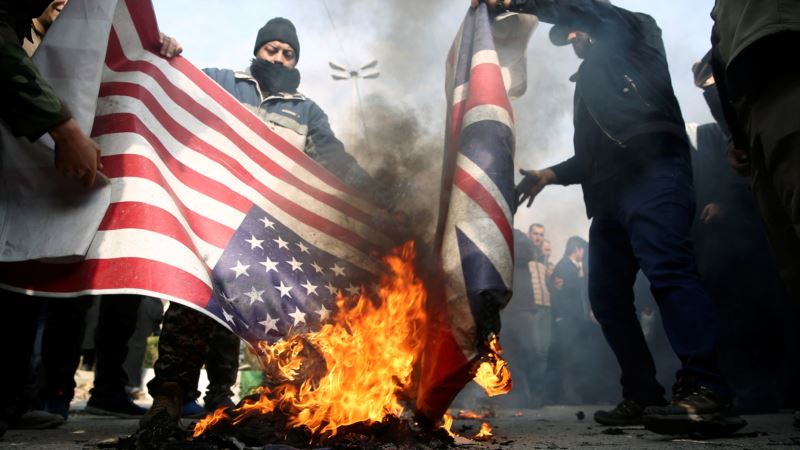 Iran’s most powerful military commander has been killed in a U.S. air strike, a major escalation of a conflict that analysts say threatens to unleash further violence in the volatile region.

The assassination of General Qasem Soleimani, the powerful head of Iran’s elite Quds Force in the Islamic Revolutionary Guards Corps (IRGC), is a significant blow to the clerical regime, which is reeling from biting U.S. sanctions, a free-falling economy, and anti-government protests.

The 62-year-old Soleimani, who was killed in a U.S. air strike in neighboring Iraq on January 3, was responsible for Iran’s foreign operations, playing a key role in spreading the Islamic republic’s influence through pro-Iranian militias in Syria, Iraq, Lebanon, and Yemen.

“Soleimani was Iran’s point man across the Middle East, not just in terms of military operations but implementing Tehran’s political strategy,” said Scott Lucas, an Iran expert at Birmingham University in Britain and editor of the EA World View website.

Several analysts said Iran is likely to respond forcefully to the killing of Soleimani, who had survived numerous assassination attempts against him over the past two decades.

“Iran has no choice but to strike back and retaliate against the assassination of Soleimani,” said Ali Alfoneh, a senior fellow at The Arab Gulf States Institute in Washington.

What shape Iran’s response might take is rather unclear.

Analysts said Tehran has the capability to act directly against U.S. military and commercial interests in the region or American allies in the area like Saudi Arabia and Israel.

The Islamic republic can also act through its proxy groups, experts said, including Iran-backed Shi’ite militias in Iraq, Lebanon’s Hizballah, and the Huthi rebels in Yemen.

Iran and its proxies have previously been blamed for disrupting vital oil supplies in the Persian Gulf through attacks on oil tankers and pipelines.

Lucas said Tehran is likely to cautiously evaluate its options before any retaliatory response because the “Americans have now shown that they have crossed the line and that they will strike back.”

“But if there is an immediate Iranian response then we are in for serious trouble because that means they’re willing to escalate this, knowing the Americans will strike back,” he said.

U.S. Defense Secretary Mark Esper said as much. “If we get word of attacks we will take preemptive action as well to protect American forces, protect American lives,” he said. “The game has changed.”

President Donald Trump’s Republican allies said Soleimani’s death was justified. His killing came days after an American contractor’s death on December 27 during a rocket attack by an Iranian-backed militia in Iraq.

But Trump’s critics said that this most drastic use of the military during his presidency was a dangerous escalation that could trigger a war in the region.

“President Trump just tossed a stick of dynamite into a tinderbox,” former Vice President and Democratic presidential candidate Joe Biden said in a statement. “Iran will surely respond. We could be on the brink of a major conflict across the Middle East.”

Ali Afshari, an Iranian activist and analyst based in the United States, told RFE/RL’s Radio Farda that Soleimani’s death could elevate a proxy war between Washington and Tehran to a “direct military confrontation” that could have unpredictable consequences.

Analysts said Soleimani’s death was unlikely to cause a major shift in Iran’s military operations or threaten its alliances with proxies in the region.

“Power is highly institutionalized in the Quds Force,” said Alfoneh at The Arab Gulf States Institute. “His successor may not possess Soleimani’s charisma but will exert influence in Iran and abroad thanks to the power of the Quds Force.”

Less than a day since Soleimani’s death, Khamenei named Brigadier General Ismail Qaani as his successor.

Qaani fought in the Iran-Iraq War in the 1980s and was a trusted aide to Soleimani. A former intelligence official in the IRGC, Qaani was one of the key figures in Iran’s involvement in the Syrian civil war.

“The regime will turn the killing of Soleimani into a huge propaganda opportunity and will rally large parts of the public,” said Alfoneh, an expert on the IRGC.

The media-savvy Soleimani — who led the Quds Force for more than 20 years — was one of Iran’s most-popular public figures.

“Even though Iran is under great economic pressure and there is a great deal of internal unrest, Soleimani represented the face the Islamic republic wanted to present in terms of its influence and power,” said Lucas.

Tens of thousands of Iranians took to the streets after the assassination, chanting “Death to America” and holding up portraits of Soleimani. Demonstrators filled streets in Tehran and more than a dozen other cities.

“I don’t see his death splitting the political factions in Iran since each faction will claim Soleimani as one of their own,” said Alfoneh.