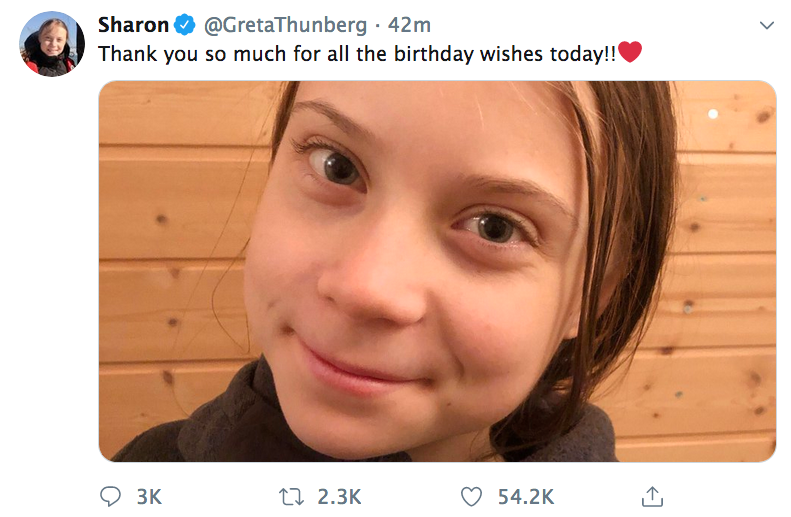 The first #FridaysForFuture protests of the new year and decade coincided with the 17th birthday of Greta Thunberg, who joined fellow young climate action leaders at a demonstration outside Swedish Parliament.

Thunberg—who held the first climate strike by herself 72 weeks ago—returned Friday to the place where she first demanded policy-makers act immediately to stop the planet-warming extraction of fossil fuels, while people in cities around the globe held their own strikes.

In Scotland, 14-year-old demonstrator Holly Gillibrand asked that all supporters of climate action commit to doing “whatever they can in 2020 to make a difference” as a new year of climate strikes began.

Strikers in countries including Uganda, Germany, and Australia also continued their months-long commitment to walking out of their classrooms every Friday to call for far more action from governments to tackle the climate crisis.

Some who attended climate strikes sent Thunberg birthday wishes, with one striker in Ireland tweeting that “climate action now” would be the best gift to give the activist.

Climate strike in Helsinki today! The weather was nicer than last week! Thank you all who came. It was so nice to meet strikers today from Germany and Estonia And happy birthday @GretaThunberg #FridaysForFuture #Climatestrike pic.twitter.com/b3GONCMJXy

Musician Patti Smith wished Thunberg a happy birthday in a poem posted on Instagram, writing that as she turns 17, Thunberg is “asking for no accolade, no gifts, save we not be neutral.”

This is Greta Thunberg, turning  seventeen today, asking  for no accolade, no gifts,  save we not be neutral.  The Earth knows its kind, just as all deities, just as animals and the healing  spring. Happy birthday  to Greta, who stood today,  as every Friday, refusing  to be neutral.

Other supporters also thanked Thunberg for her “bravery” and for “trying to save the world” as “neocons try to destroy” it.

As neocons try to destroy our world, there’s at least one person who’s trying to save it.

Thunberg thanked supporters for their birthday wishes Friday on Twitter—with her name showing up as “Sharon,” a reference to an actress who had called Thunberg by the name the previous night on the British show “Celebrity Mastermind.”

Last month, Thunberg changed her biography on Twitter as a send-up of President Donald Trump’s remark that the climate leader “must work on her anger management problem.”