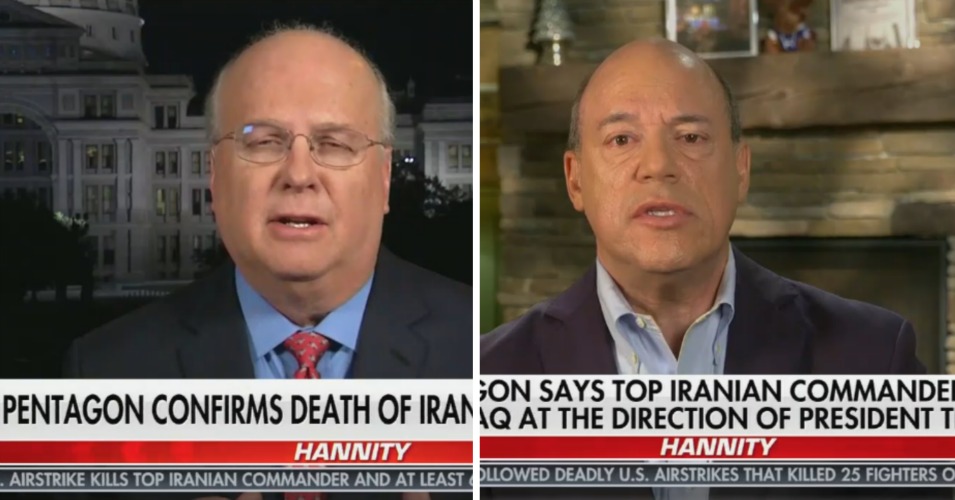 Trump critics and peace advocates watched in horror Thursday night and Friday morning as some of the top architects of the Iraq War took to the corporate media to spin a narrative aimed at retroactively convincing Americans that the killing of Iranian military official Qasem Soleimani was essential to the safety of the U.S.—a replica of the run-up to the Iraq War nearly two decades ago.

Following reports that President Donald Trump ordered the airstrike that killed Soleimani, the major general of the Iranian Islamic Revolutionary Guard Corps, former George W. Bush administration officials were among those who media outlets called on to make a case for the act.

“CNN is allowing a parade of Republican lawmakers to go on air and cheerlead for war with Iran, and barely bothering to ask any of them how the U.S. keeps the region safe or what the plan is. We’ve learned much less since 2003 than we should have.”
—Matthew Chapman, Raw StoryFormer White House Press Secretary Ari Fleischer suggested, as conservatives did in 2003 regarding Iraqi civilians, that Iranians would likely celebrate the killing of Soleimani—presuming to speak for demonstrators who have decried economic hardships in the face of U.S. sanctions and government mismanagement in recent weeks.

“The Iranian people have been leading a revolution, a rebellion against their government, knowing what a dictatorship it is,” Fleischer told Fox News. “So I think it is entirely possible this is going to be a catalyst inside Iran where the people celebrate the killing of Soleimani.”

Journalist Judd Legum wrote that Fox is “getting the band back together” as right-wingers rework their 2003 claims to apply to Iran, joined by Trump administration officials like Secretary of State Mike Pompeo.

Pompeo appeared on CNN Friday to claim that Iranian civilians “will view the American action last night as giving them freedom”—even as thousands of people took to the streets in Tehran and other cities in Iran to protest the Trump administration’s actions.

A number of observers denounced cable news networks for offering a platform to pro-war extremists while ignoring the voices of peace advocates and critics.

“Former Bush appointees who thought the 2003 invasion of Iraq was a good idea?” tweeted journalism professor and Guardian columnist Christian Christensen. “Maybe not be the most objective commentators on US interests in the region.”

What international news consumers do NOT need right now are guys who ran the US neo-colonial disaster in Iraq that killed hundreds of thousands being interviewed as “experts” on the region. #Iran #Iraq

CNN is allowing a parade of Republican lawmakers to go on air and cheerlead for war with Iran, and barely bothering to ask any of them how the U.S. keeps the region safe or what the plan is.

We’ve learned much less since 2003 than we should have.

I don’t mean to be alarming and I haven’t been briefed but Ari Fleischer and Karl Rove are on TV and that alone makes me think no one has thought this through.

“It’s War Inc. all over again,” wrote Dave Zirin, sports editor for The Nation. “No voices calling for peace. No voices critical of empire. Just establishment media and current and former Pentagon officials who feed off the trillion-dollar war machine.”

The MSM is failing the test of this moment at warp speed. Nothing’s been learned from 2003. Nothing.

News networks demonstrated their eagerness to present an uncritical view of the Trump administration’s reasoning for the airstrike, which came days after the president, without evidence, accused Iran of orchestrating an attack at the U.S. Embassy in Baghdad.

CNBC‘s declaration that the U.S. had “just [taken] out the world’s number one bad guy” was condemned as “journalistic malpractice” by writer Kelsey Atherton.

This is journalistic malpractice, a naked and unquestioning endorsement of military escalation that obliterates context or understanding. It would make more sense in a Verhoeven satire than the real world, but here we are, in hell. https://t.co/kxviMvAGYP

Philadelphia Inquirer columnist Will Bunch wrote about the contrast between the Trump administration’s sudden escalation in Iran and the run-up to George W. Bush’s 2003 invasion of iraq—prior to which the president, his top advisers, and other conservative commentators spent more than a year insisting the U.S. military should defeat Saddam Hussein.

Trump ordered the airstrike that killed Soleimani before “99 percent” of Americans had even heard of the official, wrote Bunch.

“Within minutes, the same people who brought us the endless wars in Iraq, Afghanistan and elsewhere suddenly showed up on TV to declare [Soleimani] was the worst person in the world,” he tweeted.

3. I can’t tell you how many times I’ve read in the last 10 hours that “Suleimani is behind the deaths of hundreds of Americans.” Not once has anyone, at least on TV, said any specifics of who or how, let alone explain how either the U.S. and the world is safer with him gone.

“Where is the speech to the American people that lays out to the everyday citizen 1) who was Soleimani 2) what are his crimes against the U.S. 3) how does killing him make us safer 4) what is our plan for the messy aftermath?” Bunch asked, calling the administration’s unilateral move without lawmakers’ knowledge—much less congressional approval—”imperialistic and authoritarian.”

8. That’s not democracy. It’s not what the United States of America was supposed to be. It’s imperialistic and authoritarian — an autocratic ruler quite possibly starting a regional war without the informed consent of the people

Filmmaker and activist Michael Moore added that with a steady stream of commentary from Fleischer, Rove, Pompeo, and other conservatives clamoring to move ahead with war in Iran, Americans will be “trained to hate” Soleimani by the end of the week—even if they had never heard of him before Thursday night.

Hello fellow Americans. Do you know this man? Did you know he was your enemy? What? Never heard of him? By the end of today you will be trained to hate him. You will be glad Trump had him assassinated. You will do as you are told. Get ready to send your sons &daughters off 2 war pic.twitter.com/8CprNDMgTf