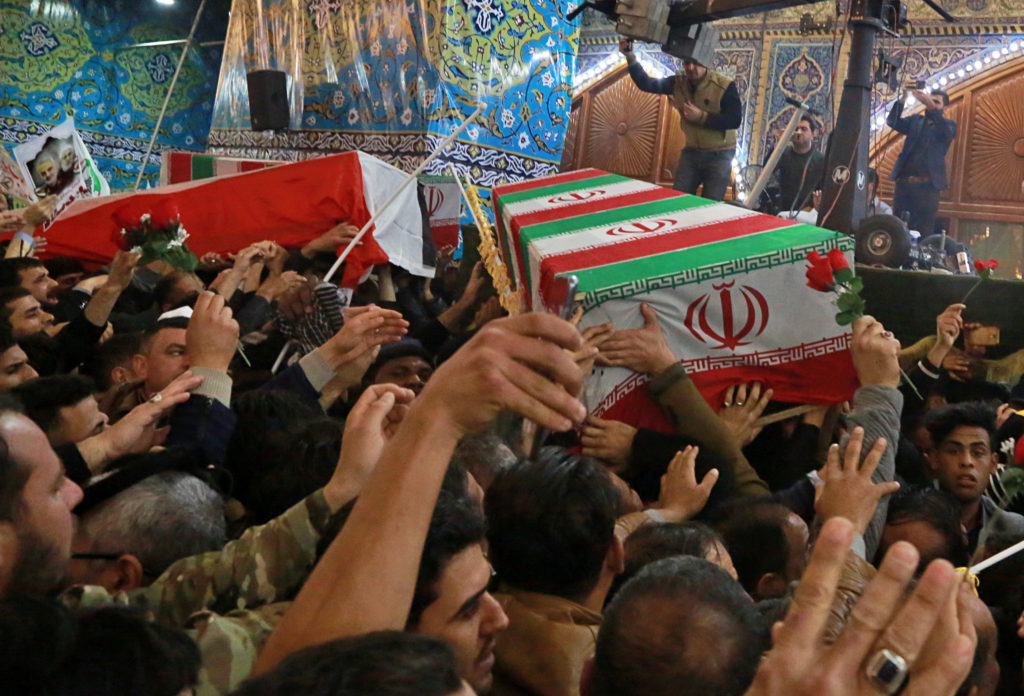 BAGHDAD — Thousands of militiamen and other supporters chanting “America is the Great Satan” marched in a funeral procession Saturday in Baghdad for Iran’s top general after he was killed in a U.S. airstrike, as the region braced for the Islamic Republic to fulfill its vows of revenge.

Gen. Qassem Soleimani, the head of Iran’s elite Quds Force and mastermind of its regional security strategy, was killed early Friday near the Baghdad international airport along with senior Iraqi militants in an airstrike ordered by President Donald Trump. The attack has caused regional tensions to soar and tested the U.S. alliance with Iraq.

Iran has vowed harsh retaliation, raising fears of an all-out war, but it’s unclear how or when it might respond. Any retaliation was likely to come after three days of mourning declared by Supreme Leader Ayatollah Ali Khamenei. All eyes were on Iraq, where America and Iran have competed for influence since the 2003 U.S.-led invasion.

Trump says he ordered the strike, a high-risk decision that was made without consulting Congress or U.S. allies, to prevent a conflict. U.S. officials say Soleimani was plotting a series of attacks that endangered American troops and officials, without providing evidence.

The U.S.-led coalition has scaled back operations and boosted “security and defensive measures” at bases hosting coalition forces in Iraq, a coalition official said on condition of anonymity according to regulations. The U.S. has meanwhile dispatched another 3,000 troops to neighboring Kuwait, the latest in a series of deployments in recent months as the standoff with Iran has worsened.

Soleimani was the architect of Iran’s regional policy of mobilizing militias across Iraq, Syria and Lebanon, including in the war against the Islamic State group. He was also blamed for attacks on U.S. troops and American allies going back decades.

In Baghdad, thousands of mourners, mostly men in black military fatigues, carried Iraqi flags and the flags of Iran-backed militias that are fiercely loyal to Soleimani at Saturday’s ceremony. They were also mourning Abu Mahdi al-Muhandis, a senior Iraqi militia commander who was killed in the same strike.

The mourners, many of them in tears, chanted “No, No, America,” and “Death to America, death to Israel.” Mohammed Fadl, a mourner dressed in black, said the funeral is an expression of loyalty to the slain leaders. “It is a painful strike, but it will not shake us,” he said.

Helicopters hovered over the procession, which was attended by Prime Minister Adel Abdul-Mahdi and leaders of Iran-backed militias. The procession later made its way to the Shiite holy city of Karbala, where the mourners raised red flags associated with unjust bloodshed and revenge.

The slain Iraqi militants will be buried in Najaf, while Soleimani’s remains will be taken to Iran. More funeral services will be held for Soleimani in Iran on Sunday and Monday, before his body is laid to rest in his hometown of Kerman.

The day of mourning was followed by a series of rockets that were launched Saturday evening and fell inside or near the Green Zone, which houses government offices and foreign embassies, including the U.S. Embassy.

No one was injured by a Katyusha rocket that fell inside the square less than one kilometer from the embassy, according to an Iraqi security official who spoke on condition of anonymity because he was not authorized to speak to reporters. The security official said another rocket in Baghdad landed about 500 meters from As-Salam palace where the Iraqi President Barham Salih normally stays in Jadriya, a neighborhood adjacent to the Green Zone.

Another security official said three rockets fell outside an air base north of Baghdad were American contractors are normally present. The rockets landed outside the base in a farm area and there were no reports of damages, according to the official.

One of the Iran-backed militia, Asaib Ahl al-Haq, or League of the Righteous, called on Iraqi security forces to stay away from U.S. bases, keep at least a 1,000 meters distance (0.6 miles) starting Sunday night. “The leaders of the security forces should protect the safety of their fighters and not allow them to be human shields to the occupying Crusaders,” the warning statement said, in reference to the Coalition bases.

Iraq’s government, which is closely allied with Iran, condemned the airstrike that killed Soleimani, calling it an attack on its national sovereignty. Parliament is meeting for an emergency session Sunday, and the government has come under mounting pressure to expel the 5,200 American troops based in the country, who are there to help prevent a resurgence of the Islamic State group.

Hadi al-Amiri, who heads a large parliamentary bloc and is expected to replace al-Muhandis as deputy commander of the Popular Mobilization Forces, an umbrella group of mostly Iran-backed militias, was among those paying their final respects in Baghdad.

“Rest assured,” he said before al-Muhandis’ coffin in a video circulated on social media. “The price of your pure blood will be the exit of U.S. forces from Iraq forever.”

The U.S. has ordered all citizens to leave Iraq and temporarily closed its embassy in Baghdad, where Iran-backed militiamen and their supporters staged two days of violent protests earlier this week in which they breached the compound. Britain and France have warned their citizens to avoid or strictly limit travel in Iraq.

No one was hurt in the embassy protests, which came in response to U.S. airstrikes that killed 25 Iran-backed militiamen in Iraq and Syria. The U.S. blamed the militia for a rocket attack that killed a U.S. contractor in northern Iraq.

Tensions between the U.S. and Iran have steadily intensified since Trump’s decision to withdraw from the 2015 nuclear deal and restore crippling sanctions, which have devastated Iran’s economy and contributed to recent protests there in which hundreds were reportedly killed.

The administration’s “maximum pressure” campaign has led Iran to openly abandon commitments under the deal. The U.S. has also blamed Iran for a wave of increasingly provocative attacks in the region, including the sabotage of oil tankers in the Persian Gulf and an attack on Saudi Arabia’s oil infrastructure in September that temporarily halved its production.

Iran denied involvement in those attacks, but admitted to shooting down a U.S. surveillance drone in June, saying it had strayed into its airspace.

Billboards and images of Soleimani, who was widely seen as a national icon and a hero of the so-called Axis of Resistance against Western hegemony, appeared on major streets in Iran Saturday with the warning from the supreme leader that “harsh revenge” awaits the U.S.

“The Americans did not realize what a great mistake they made,” Rouhani said. “They will see the effects of this criminal act, not only today but for years to come.”

On the streets of Tehran, many mourned Soleimani.

“I don’t think there will be a war, but we must get his revenge,” said Hojjat Sanieefar. America “can’t hit and run anymore,” he added.

Another man, who only identified himself as Amir, was worried.

“If there is a war, I am 100% sure it will not be to our betterment. The situation will certainly get worse,” he said.

In an apparent effort to defuse tensions, Qatar’s foreign minister, Sheikh Mohammed bin Abdulrahman Al Thani, made an unplanned trip to Iran where he met with Rouhani and other senior officials.

Qatar, which has often served as a regional mediator, hosts American forces at the Al-Udeid Air Base and shares a massive offshore oil and gas field with Iran.

A Saudi official had earlier confirmed to The Associated Press that the U.S. did not coordinate with Saudi Arabia before carrying out the strike that killed Soleimani. The official spoke on condition of anonymity in order to discuss defense matters.

In a sign of his regional reach, supporters in Lebanon hung billboards commemorating Soleimani in Beirut’s southern suburbs and in southern Lebanon along the disputed border with Israel, according to the state-run National News Agency.

Both are strongholds of the Iran-backed Hezbollah militant group, whose leader, Hassan Nasrallah, has close ties to Soleimani. A portrait of Nasrallah could be seen in Soleimani’s home when mourners paid tribute there.

Palestinian factions in the Gaza Strip, including the territory’s Hamas rulers, opened a mourning site for the slain general and dozens gathered to burn American and Israeli flags. Iran has long provided aid to the armed wing of Hamas and to the smaller Islamic Jihad militant group.

Ismail Radwan, a senior Hamas official, said the killing of Soleimani was “a loss for Palestine and the resistance.”

By QASSIM ABDUL-ZAHRA and SARAH EL DEEB The Associated Press