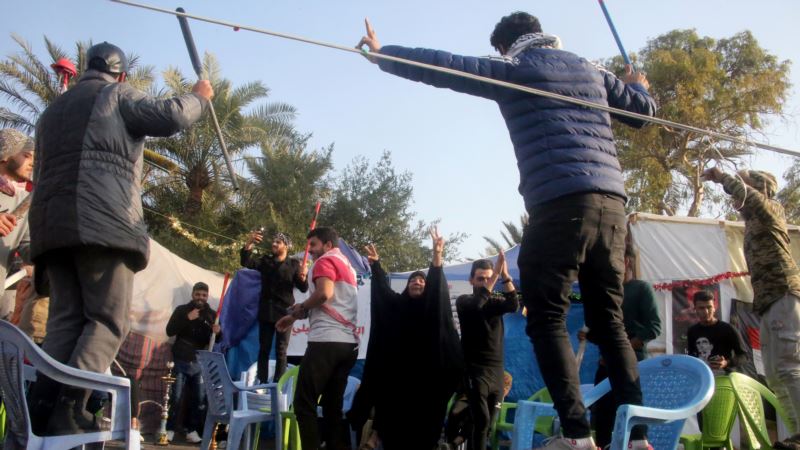 WASHINGTON — U.S. President Donald Trump says Washington has identified 52 “Iranian sites” that will be hit “very fast and very hard” should Tehran strike any American target, while the early stirrings of protests began surfacing on U.S. streets against the strike that killed a top Iranian commander.

“Iran is talking very boldly about targeting certain USA assets as revenge for our ridding the world of their terrorist leader who had just killed an American, & badly wounded many others, not to mention all of the people he had killed over his lifetime, including recently hundreds of Iranian protesters,” Trump wrote on Twitter on January 4.

Trump added that Qasem Soleimani, who was killed in the U.S. air raid while traveling in Iraq on January 3, had already attacked the U.S. Embassy in Baghdad and was “preparing for additional hits in other locations.”

“Iran has been nothing but problems for many years. Let this serve as a WARNING that if Iran strikes any Americans, or American assets, we have targeted 52 Iranian sites (representing the 52 American hostages taken by Iran many years ago), some at a very high level & important to Iran & the Iranian culture.”

Trump wrote that “those targets, and Iran itself, WILL BE HIT VERY FAST AND VERY HARD. The USA wants no more threats!”

Trump’s reference to hostages taken by Iran refers to the takeover of the U.S. Embassy in Tehran in 1979 by Iranian revolutionaries, who held the 52 Americans captive for 444 days.

The inclusion of “cultural” sites in a potential target list raised some concerns among critics.

Colin Kahl, who was a national security official in the administration of President Barack Obama, wrote on Twitter that he “found it hard to believe the Pentagon would provide Trump targeting options that include Iranian cultural sites. Trump may not care about the laws of war, but [Department of Defense] planners and lawyers do…and targeting cultural sites is war crime.”

Iran has hit back verbally but so far has not taken any known military retaliatory measures following the January 3 attack, which also killed Abu Mahdi al-Muhandis, a deputy commander of the Iran-backed Hashd Shaabi militia in Iraq.

Iranian Supreme Leader Ayatollah Ali Khamenei has threatened “severe retaliation” against the “criminals” who killed Soleimani, while President Hassan Rohani said in televised remarks that the assassination will make Tehran more decisive in its resistance against the United States.

“Soleimani’s martyrdom will make Iran more decisive to resist America’s expansionism and to defend our Islamic values. With no doubt, Iran and other freedom-seeking countries in the region will take his revenge,” Rohani said.

Trump’s decision to kill Soleimani — who commanded Iran’s Quds Force, an arm of the hard-line Islamic Revolutionary Guards Corps (IRGC) — was praised by his Republican supporters but criticized by many Democrats, who say it could draw the United States into a war with Iran.

The Quds Force has been designated as a foreign terrorist organization by the United States.

Demonstrators took to the streets in many American cities to protest against the targeted killing by U.S. forces.

“No justice, no peace, U.S. out of the Middle East,” crowds chanted in New York’s Times Square. Some carried signs that read “Stop bombing Iraq” and “No war or sanctions on Iran.”

Some 200 people chanted “no war on Iran” outside the White House in Washington, while similarly sized events were held in Chicago, Philadelphia, San Francisco, and elsewhere.

Many traditional U.S. allies have also expressed concerns that the military strike could ignite a wider conflict in the already tense Middle East.

However, it added that the attacks may have injured Iraqi civilians.

“The night of January 4, two rocket attacks occurred near Iraqi bases that host Coalition troops in Baghdad and Balad, a total of 13 attacks in the past two months,” coalition military spokesman Colonel Myles B. Caggins III said.

Washington has blamed Iran for orchestrating attacks by Iraqi Shi’ite militias on U.S. and coalition sites, including an assault on the U.S. Embassy in Baghdad by a mob that included pro-Iran paramilitary groups on December 31. The attackers withdrew on January 1 and no staff was hurt.

With reporting by AFP and dpa