Once I realized to my dismay that I couldn’t believe a word of what our media and political leaders said about major events in the here and now, their credibility on controversial happenings so long ago and far away entirely disappeared.”
— Ron Unz, 2018

The 100th anniversary of Armistice Day, November 11, 1918, generated renewed interest in the First World War, its beginnings, its aftermath, and the lead up to World War II. For anyone brought up with the carefully-crafted narratives that constitute “popular” history, a dive into details of the World Wars can shake one’s faith in the validity of all generally accepted history.  A good introduction to long buried aspects of the era of the World Wars is Patrick J. Buchanan’s 2008 book “Churchill, Hitler and the Unnecessary War“, in which all roads lead back to Britain’s 1914 declaration of war on Germany, which soon involved much of the world. Germany’s rising power had threatened British imperial dominance within a Rube Goldberg complexity of formal alliances and secret agreements. A Serbian shot an Austrian archduke, Serbia allied with Russia, but Austria-Hungary allied with Germany, and Russia with Britain and France, etc. Ultimately, the “Great Men” leading the masses appeared powerless to stop the WW I slaughter: 8 million dead, 20 million wounded. Thereafter, the Treaty of Versailles imposed on Germany grossly unjust reparations, this leading ultimately to a humiliated Germany embracing Hitler’s rise, thence to a war with a price tag of more than 50 million human lives.

Massive works on Churchill and Hitler by the towering historian David Irving are based on every conceivable information source down to personal diaries and interviews. Irving’s departure from widely accepted “mainstream” story lines has irked some fellow historians, and because he has not been perfectly in synch with Holocaust dogma, he, like so many, has suffered unwarranted accusations of anti-semitism. He writes that many details in the generally-accepted history of WW II, apparently like much of history itself, are simply wrong. His depiction of Winston Churchill is as a central causative agent of both world wars. What’s that? you say! Churchill, during his lifetime considered the greatest living Englishman, a war monger? Likewise, Adolph Hitler struggled to avoid war? Are these too shocking to accept? Research for yourself, and you may find yourself in agreement with Caitlin Johnstone: “Our species fought two world wars (or arguably one world war with a long intermission to grow more troops) for no justifiable reason at all.”

Insight into how governmentally-sanctioned histories might be managed for mass consumption is offered by Ron Unz who cites an amazing number of A-list commentators (scroll down to subtitle “Purging our Leading Historians and Journalists”) who, on diverging from authorized accounts, were simply blacklisted, thereafter unable to get published. It seems that a thread of decency runs through the human family such that elaborate lies must be maintained by governments in order to justify and generate and perpetuate wars. If the Spanish-American War, the two World Wars, Vietnam and both invasions of Iraq have anything in common, it is that all six involved official lies used to bring We The People on board: Remember the Maine, the Lusitania, Pearl Harbor, the Gulf of Tonkin, Kuwaiti babies, Weapons of Mass Destruction. Lies.

During Christmas, 1914, certain British and German soldiers of WW I got the urge for a truce. Shouts of “Merry Christmas!” across “no man’s land” of the front led to troops emerging from trenches, exchanging food and trinkets, playing a bit of soccer. Photos are easy to find on the Internet, but one in particular crystalizes a truth about humanity, regardless of what contorted propaganda might be coming down from the damned stuffed shirts who send humans to slaughter. Historians necessarily focus on political power players and the decision makers of war, but it is decent folk within the powerless masses who are the ones driven to do the killing and the dying. The two youths in the photo — not many years beyond childhood — could be any soldiers from any period of time, of any ethnicity, in any war. Like healthy people everywhere, they would have greatly preferred to be friends, and it shows.

Dwight Eisenhower, a General turned President, is quoted as having said “I think that people want peace so much that one of these days governments had better get out of the way and let them have it.” Such a day is not yet visible on the horizon. 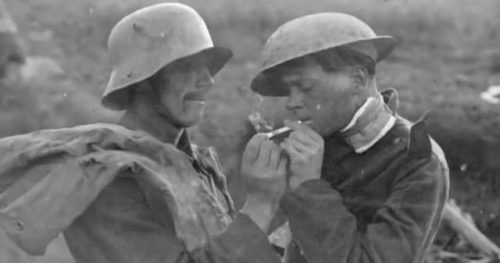