Journalist William Greider, who died on Christmas Day 2019 at the age of 83, was a repeat guest on CounterSpin; Janine Jackson interviewed him about former Federal Reserve chair Alan Greenspan for the September 21, 2007, episode. This is a lightly edited transcript.

Janine Jackson: Alan Greenspan is the sort of person about whom the Los Angeles Times would report:

Whether on Wall Street or Pennsylvania Avenue, no voice carries more weight on economic matters in the United States than that of Greenspan, his status as a “former” notwithstanding.

Newsweek headlines their interview, “The Oracle Reveals All.”

Given that, it’s reasonable to question whether corporate media will permit the former Federal Reserve chair, who has just released a memoir, to write his own legacy. Present tension has focused on Greenspan’s backing off from a statement he made in the book about the Iraq War being about oil.

But what about his descriptions of the economic policies he supported, and their impacts? What should reporters be asking the man some called “The Maestro” about those?

Joining us now to talk about Greenspan and the press is William Greider, national affairs correspondent at The Nation magazine, and author, most recently, of The Soul of Capitalism: Opening Paths to a Moral Economy. He joins us now by phone from Vermont. Welcome to CounterSpin, William Greider.

JJ: Alan Greenspan is now criticizing the Bush White House for straying from conservative economic policy, of small government, and holding down spending, and so forth. As someone who watched his term very carefully, how close is this Alan Greenspan to that one? Is this a wholesale reinvention?

William Greider: “The public, because it’s not very well-represented by their elected representatives, is kept distanced from those arguments, and therefore doesn’t even know they’re going on, much less have a voice in them.”

WG: He’s rewriting the record, or trying to; it’s quite amazing, actually. He’s only been out of that office about a year or so. But I think he recognizes that the bones he left behind are now beginning to smell a bit.

We have a financial crisis, which has been written about a lot. We’re on the edge of a recession. The United States economy, not withstanding the usual headlines, is in terrible shape for the long term. And Greenspan had a major, maybe the most important, role in creating that. So now he wants to go back and say, “Well, actually, I didn’t do this. I didn’t mean that.” It’s quite extraordinary.

And, of course, the press, true to form, is mostly being deferential and accepting his revisions. Well, now we know what he really thinks. He was in this job 18 years, and we finally have to get the truth out of him. Well, it’s not the truth; he’s really, literally rewriting history.

JJ: He’s not getting a completely free ride. Paul Krugman took him on in the New York Times…

JJ: …the Washington Post editorial had him as “not entirely blameless.”

JJ: He has had an extra sweet ride with the media, hasn’t he, all along?

WG: Yeah. And in the context of that institution, the Federal Reserve, that’s not new. It’s a very intimidating political institution, which pretends not to be political. And the press has mostly always gone along with that. They defer to the Federal Reserve in a way they defer to nobody else in government. And Greenspan was probably the most extreme example of that, for lots of reasons, including the complexity and intimidating nature of the central bank, but also because they thought his idea of what was right for the economy was pretty much what they thought.

JJ: Perhaps that buy-in may explain a reluctance on the part of media to really challenge those presumptions, because they shared them.

JJ: Greenspan is presented as dry-eyed, as a sort of eminence grise, but you once wrote that, “It is not exactly that he lies, but Alan Greenspan certainly ranks among the most duplicitous figures to serve in modern American government.” You said that he “corrupt[ed] the political dialogue,” and I wonder if you can talk about the role that reporters played in abetting that. 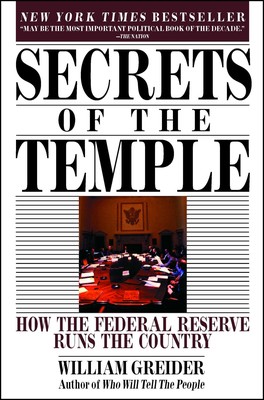 WG: It starts with ignorance. Surprise. I mean, I spent a number of years producing a book called Secrets of the Temple: How the Federal Reserve Runs the Country. And I say with some pride that it’s still in print, and sold lots and lots of copies. Even Alan Greenspan, I can say, had it on his shelf when he was at the Fed, because you can see it in the pictures of him, behind him.

And what I came to understand about the complexities of monetary policy—and it is complex—is that it boils down to a number of fairly straightforward propositions: Are you going to favor holding down inflation over growth and employment? Are you going to favor capital over labor, that is, allowing wages to rise in step with economic growth, or financial assets, like stocks and bonds and so forth. These are really core choices of a democracy, and the Fed essentially hides them from public view. That is to keep them “nonpolitical,” but, of course, they’re not nonpolitical.

And the people who care intensely from the capital interests—that is financiers, bankers—lobby the Fed relentlessly. And they don’t lobby in the usual way, by turning out campaign contributions, but they stay very close to the inside debates.

The public, because it’s not very well-represented by their elected representatives, is kept distanced from those arguments, and therefore doesn’t even know they’re going on, much less have a voice in them. And that’s—you can tell from my tone of voice—to me, that’s the central outrage of this institution.

Greenspan committed heresy, really, within the realm of his own institution, by dabbling in the politics, relentlessly. Now, he’s not the first Fed chairman to do that, but he made common cause with the right-wing ideology of the Republican Party, and he scolded the Democrats relentlessly. When Bill Clinton was president, he got Clinton to take what I think was a very wrong deal, to sort of hold down the economy, and let’s keep inflation going lower and lower and lower, and we’ll catch up later.

Whereas when Bush comes in, Bush proposes an outrageous, regressive tax-cutting agenda, favoring the very top incomes, etc., and Greenspan comes out and says, “Yes, I like that, you should do that.”

JJ: Even though that’s one of the things he’s now trying to say….

WG: That’s part of what he’s rewriting as well:  I didn’t really say I endorsed the Bush tax cuts. Well, he did. It’s all in the record. He testified to that effect.  This is not a stupid person. He knew exactly what he was doing when he made that remark.

JJ: Some of us remember another former government official who had a change of heart about economic policy—David Stockman, Reagan’s budget director. But Stockman, it seemed like, had real doubts about what he’d done. This is not Greenspan having doubts about the impact of his policies.

WG: No, and Stockman was interesting, because I was talking to him all through that period. I was then an editor at the Washington Post, and wrote a piece myself, called “The Education of David Stockman,” about those conversations, in which he actually, I think quite honestly, and against his own interest, acknowledged that his grand theory of right-wing ideology had proved wrong. He thought that the Reagan program was going to balance the budget, and do all kinds of other good things, and it was simply wrong.

JJ: That’s certainly not what we’re seeing with Alan Greenspan.

Let me just ask you, finally, whether or not he is successful, does Greenspan’s attempt to distance himself from some of the Bush White House’s economic policies suggest that there’s a real threat to the heyday of those policies? I mean, the essentials that you were talking about—you know, paying for tax cuts for the rich on the backs of workers—that all seems to still be in place.

WG: It is in place now, Janine, but I think you probably see the same thing I observe: It is in collapse, and I mean utter collapse. All of the things they proposed as fundamental economic policy for the US have come to ruin. And that’s whether you’re talking about the so-called free-trade system or holding down inflation, rewarding capital, punishing labor with depressed wages, or deregulation and what we’ve gotten from that…. I could go on with list.

We don’t know how quickly and rationally it can be played out in politics. But I think when you look at the 2008 election, that’s what it will be about, whether any Democrats have the nerve to say it plainly or not.

JJ: We’ve been speaking with William Greider. You can follow his work in The Nation magazine. His latest book is the The Soul of Capitalism: Opening Paths to a Moral Economy. Thank you very much for joining us this week on CounterSpin.

WG: Thanks for having me.