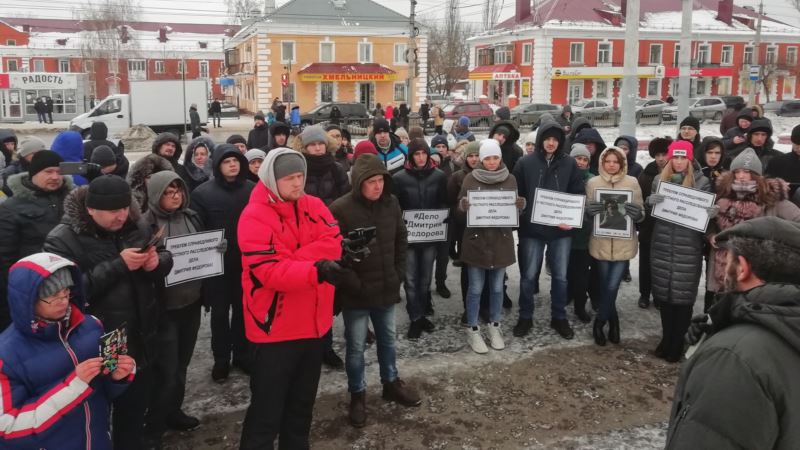 OMSK, Russia – Locals in this Siberian city are calling for an impartial investigation into the death of Dmitry Fyodorov, a 25-year-old man whose decapitated body was found on a railway late last month.

About 80 people braved frigid temperatures on January 4 to attend a demonstration at which participants signed a petition urging federal prosecutors to investigate the police handling of the case.

Fyodorov, an information-technology specialist and musician, was arrested on December 15 and charged with the large-scale distribution of narcotics. On December 18, after he was released on his own recognizance pending trial, Fyodorov recorded a video in which he claimed that the drugs had been planted on him by the police.

Fyodorov said that a National Guard officer pretended to pull a small packet from Fyodorov’s jacket. The officer dropped the item on the ground and ordered Fyodorov to pick it up, he said, and then claimed Fyodorov’s fingerprints proved the packet containing narcotics belonged to him.

Police confiscated Fyodorov’s telephone and held him without contact with legal counsel or relatives for almost 24 hours.

On December 26, Fyodorov’s decapitated body was found on a local railway. Two days later, police said his death was either a tragic accident that occurred as Fyodorov was crossing the tracks or a suicide.

Human rights activists in Russia and abroad have long alleged that police and security forces in the country often fabricated drugs cases for various reasons ranging from extortion to the harassment of political opponents, journalists, and civil-society activists.

Every year more than 100,000 people in Russia are convicted of violating Article 228 of the Criminal Code, which outlaws “the making, acquisition, storage, transportation, sending, or sale of narcotic drugs or psychotropic substances.”

In June 2019, the arrest of investigative journalist Ivan Golunov on drugs charges sparked domestic and international outrage and protests. The case was dropped, and several high-ranking Moscow police officers were dismissed for allegedly fabricating the evidence against him. A Moscow judge classified the case materials in November, so there is no way of knowing whether anyone has been or will be prosecuted.

Omsk municipal lawmaker Dmitry Petrenko has said he planned to meet with Fyodorov about his allegations but that meeting never took place. Petrenko told RFE/RL that he examined Fyodorov’s body in the morgue and concluded his injuries were not caused by being hit by a train.

Petrenko said the head was cleanly severed from the body and there was very little bleeding, as if the decapitation occurred long after Fyodorov had died.

“I was surprised that a train could hit the neck so precisely – it was too implausible for the circumstances,” Petrenko said.

Fyodorov’s girlfriend, Lyudmila Troitskaya, said she did not see any blood when she visited the place where the body was found and that she is convinced Fyodorov was brought there after he was already dead.

The press service of the Omsk Oblast branch of the Interior Ministry declined to respond to RFE/RL’s query as to whether there was a video recording of the police search of Fyodorov, as required by law.

A police spokeswoman told a press briefing on December 27 that it was a violation of the Criminal Procedural Code that the investigation into Fyodorov’s case proceeded without the involvement of a defense attorney.

Fyodorov’s lawyer, Igor Suslin, said he has not ruled out the possibility that his client committed suicide, adding that if he did then he was driven to it by the actions of the police.

Written by RFE/RL senior correspondent Robert Coalson based on reporting by Arina Yuzhnaya and Maria Chernova of the Siberia Desk of RFE/RL’s Russian Service. Current Time contributed to this report.

[1] Investigation In Case Of Russian Journalist Golunov Thwarted By Classification Of Details ➤ https://www.rferl.org/a/investigation-in-case-of-russian-journalist-golunov-thwarted-by-classification-of-details/30264412.html