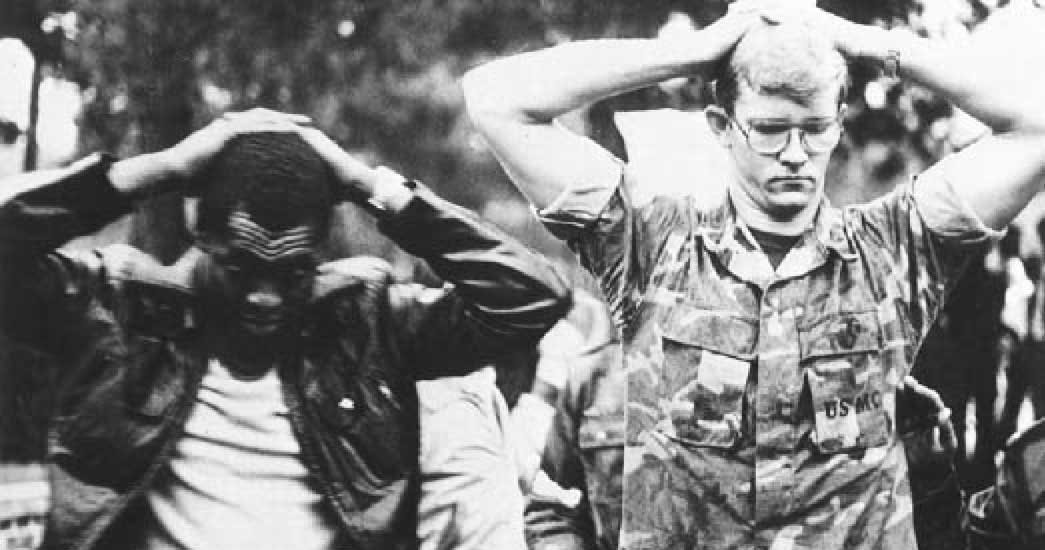 “We took action last night to stop a war. We did not take action to start a war,” said Donald Trump on Friday, after Iranian military commander Qasem Soleimani had been assassinated on his orders. Be that as it may, his own military chiefs are getting ready for a fight. Even after the earlier attack on the US embassy in Baghdad, on New Year’s Eve, it was widely reported that the Pentagon was hurriedly increasing its forces in the region.

Four thousand troops from the 81st Airborne Division were due in Kuwait last week. More recently personnel from the 75th US Ranger Regiment have also been despatched. And, not surprisingly, a detachment of the Special Purpose Marine Air-Ground Task Forces Crisis Response group from US Central Command is also on its way to reinforce embassy protection.

This last move is to be expected given what happened in Iran forty years ago. During the 1979 revolution, student activists took 52 US diplomats hostage and held them for 444 days: President Jimmy Carter’s attempt to rescue them, Operation Eagle’s Claw, failed with eight US troops killed, and the crisis did much to ensure Ronald Reagan’s election in 1980.

That crisis, and the US impotence it demonstrated, preoccupies many in the US to this day. That’s why Donald Trump cited it in threatening to attack 52 Iranian sites if the Tehran regime responds with force to the assassination of Soleimani.

Why did Trump order Soleimani’s death? Much of the current analysis in the US focuses on Trump’s personal motivation, notably the need for a diversion from his impeachment at the start of the re-election campaign. He may well have shot from the hip but others report that Secretary of State Mike Pompeo played a crucial role too.

If so, the evangelical vice-president, Mike Pence, with his strong support for Israel, will also have had a hand in this. After all, Pence is especially aware of the power of the Israel lobby in US politics and even more of the voting power of tens of millions of Christian Zionists who may be crucial in the coming re-election battle.

Christian Zionism in the US remains a seriously underestimated force among political analysts. Its influence was certainly important when Trump decided to move the US embassy from Tel Aviv to Jerusalem, a few months before the 2018 mid-sessional election. Christian Zionists are more likely than most of their fellow-citizens to vote, and they usually vote Republican. This will be strengthened the more Trump shows his support for Israel and opposition to its enemies.

Another question remains, though: how much was the Pentagon pushing for Soleimani’s assassination? Its actions since Friday suggest that it may instead have been caught by surprise. Already it is having to divert its troops in Iraq from assisting Iraqi troops in fighting ISIS to protecting its own forces – and this was announced on the day that ISIS attacked an Iraqi army unit killing two soldiers. More interesting than that, though, is a surprise move by the US Marine Corps more than a thousand miles from Iraq.

Over in the eastern Atlantic preparations have been under way for months for a major military exercise, African Sea Lion, being conducted this month with the Moroccan military. At its core was to be the 26th Marine Expeditionary Unit, with 2,500 marines fully equipped and trained for action. The 26th MEU has three main ships at its core including the USS Battan, an aircraft-carrier-sized assault ship carrying Osprey Tilt Rotor troop transporters, and two transport dock assault ships, the USS New York and the USS Oak Hill.

At short notice, this substantial force and its several support ships has been detached from African Sea Lion and has instead headed into the Mediterranean to join the US Sixth Fleet, components of which are expected to move to the eastern Mediterranean. It is the speed of this decision which has caused surprise: it is a very expensive business suddenly to cancel a major exercise. It suggests strongly that the Pentagon is seriously concerned at the risk of a sudden escalation in the conflict with Iran which, at the very least, could mean the rapid evacuation of US civilian personnel.

That might seem an obvious priority, but the underlying reasoning is as much political as humanitarian. Within Trump’s team the one outcome feared more than just about anything else is that of US citizens being taken hostage by paramilitary groups allied to Iran almost anywhere in the region. Given the experience of 1979 that would seriously undermine any chance of Trump getting re-elected in November.

Meanwhile the winners so far in Iraq have been ISIS. Their most effective opponent, Soleimani, is dead, the Iraqi Popular Mobilisation Forces militias are now deeply antagonistic to the US presence rather than to ISIS, and the Pentagon is hastily moving its own forces out of danger instead of countering the Islamists. Whether Trump realises what he has done is doubtful, but many of those around him may now be looking anxiously towards those November elections.