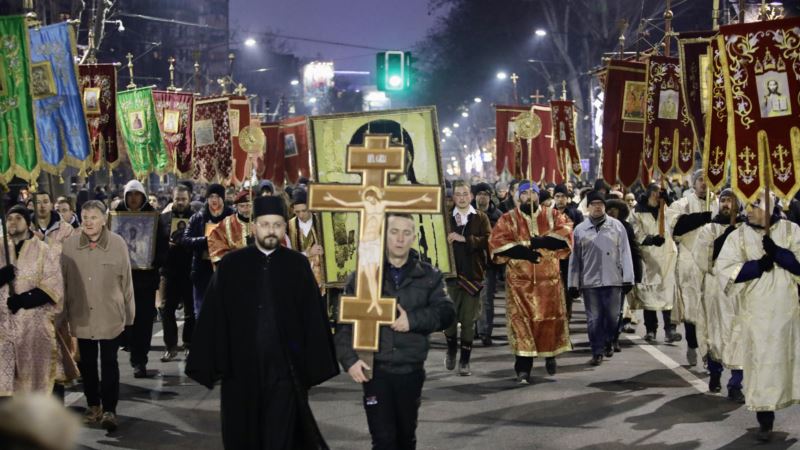 BELGRADE — Thousands of people have rallied through Serbia’s capital to protest against the alleged suppression of religious and other rights of Serbian minorities in neighboring countries.

The January 8 march to Belgrade’s St. Sava Church was led by Serbian Orthodox priests and was attended by right-wing groups, soccer fans, and others.

It was the third time protesters have taken to the streets in Belgrade against a controversial new law on religion that was adopted by Montenegro’s parliament last month.

Under the law, which took effect on January 8, religious communities must prove property ownership from before 1918.

That’s the year when predominantly Orthodox Christian Montenegro joined the Kingdom of Serbs, Croats, and Slovenes — and the Montenegrin Orthodox Church was subsumed by the Serbian Orthodox Church, losing all of its property in the process.

The Serbian Orthodox Church, its supporters, and pro-Serbian opposition parties fear the law will enable the Montenegrin government to impound church property, though officials deny they intend to.

Serbia and Montenegro were part of a federation until 2006, when Montenegro declared its independence.

Montenegro is the newest member of NATO and aspires to join the European Union.

With reporting by AP and Balkan Insight