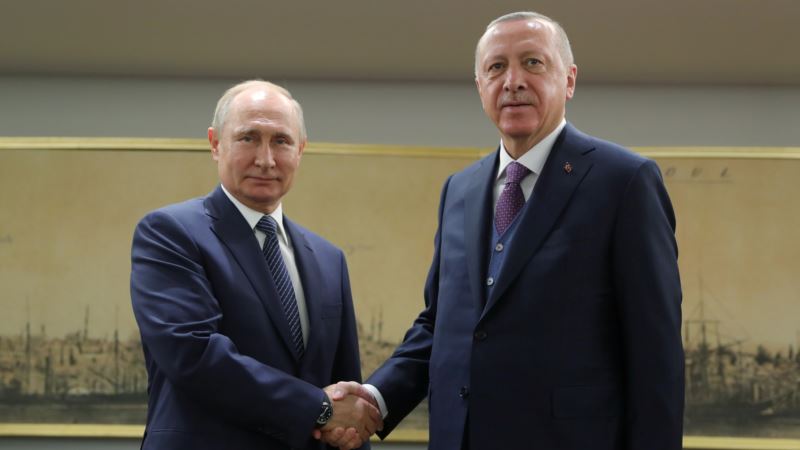 The Russian and Turkish presidents have called for a cease-fire in the conflict in Libya where Moscow and Ankara are backing opposing sides.

After meeting in Istanbul on January 8, Vladimir Putin and Recep Tayyip Erdogan issued a statement saying they supported “the necessary measures to be taken for stabilizing the situation on the ground” in the North African country.

The proposed truce would start from midnight on January 12, according to the statement.

The move comes amid an offensive by rebel forces loyal to General Khalifa Haftar to capture Libya’s capital, Tripoli, where the UN-backed Government of National Accord (GNA) is based.

Libya has been torn by violence since longtime ruler Muammar Gaddafi was deposed and killed in 2011.

The country has two rival administrations, the UN-backed one in Tripoli and Haftar’s in the city of Tobruk.

The GNA is supported by NATO-member Turkey and its ally Qatar.

Haftar is backed by the United Arab Emirates, and others, including what is believed to be a force of Russian private military contractors.

“The worsening situation in Libya is undermining the security and stability of Libya’s wider neighborhood, the entire Mediterranean region, as well as the African continent, triggering irregular migration, further spread of weapons, terrorism and other criminal activities including illicit trafficking,” Putin and Erdogan said in their joint statement.

The Turkish president announced last week he had dispatched military elements to Libya to ensure stability for the GNA.

Based on reporting by AFP and TASS