The new year opened with the United States committing an extrajudicial assassination in a foreign country by drone.

The U.S. carrying out assassinations from above — without trial, without warning — is nothing new. What was different about the killing of Al Badawi was that the U.S. military was public about it, announcing the killing via Twitter on January 6.

For years, activists, journalists, scholars, and others have been calling for transparency regarding the notoriously clandestine Defense Department and CIA-run drone programs. How one ends up on the lists of people targeted, to whom one appeals to get off of such a list, where the drones are based, and even when they strike are matters that were shrouded in secrecy during the Bush and Obama administrations.

That’s largely remained true under Trump — in fact, it’s even more difficult to get information about civilian casualties now. But here was an example of an assassination by drone being done in the open.

Presumably, the reason to have more information about the drone war is so the people running it can be held accountable for their actions. And yet, given the opportunity to ask questions about the New Year’s Day attack, precious few were asked by Congress or the mainstream media.

Today, as we spiral perilously toward direct military confrontation between the U.S. and Iran, it is worth reflecting on the failures to rein in Trump’s aggression along the way. Given the obvious signs that Trump has been keen to escalate the United States’ many wars — and begin new ones — the complicity of other institutions in Trump’s belligerence, particularly Congress, is stunning.

Trump’s unilateral withdrawal from — and efforts to destroy — the nuclear deal sparked a predictable trajectory of escalating tensions between the U.S. and Iran. Many have pointed that out, most recently former National Security Adviser Susan Rice. What we need to examine more deeply are the decisions between then and now that enabled Trump to pursue such a path.

At several key junctures, lawmakers simply failed to challenge acts of U.S. aggression carried out without even a pretense of accountability, as when Amnesty International documented the fact that the U.S. killed civilians in its escalating air war in Somalia, in a report that received too little attention. Or when journalists reported that the U.S.-led siege against ISIS in the Syrian city of Raqqa was devastating for civilians of that city — whom the U.S. then abandoned, after saying it would help rebuild.

Other times, lawmakers and other officials did raise their voices in opposition to Trump’s foreign policy moves — by saying that he wasn’t committed enough to pursuing U.S. wars. Such was the response when Trump announced that he was withdrawing troops from the Turkish border with Syria. Critics advocated maintaining the open-ended military presence throughout Syria.

But we don’t even have to look back that far.

On December 9 — barely a month ago — the Washington Post began publishing a series of articles known as the Afghanistan Papers, which documented years of lies by U.S. officials and catastrophes caused by U.S. actions in its 18-year occupation of that country. Two weeks later, the New York Times released documents and video, principally testimony from U.S. Navy SEALs, that confirmed the unmistakable war crimes committed by Navy SEAL chief Eddie Gallagher, who had been recently acquitted of the most serious charges — and pardoned by the president.

Here were the major newspapers of record running front-page coverage of serious abuses people should be called to account for. Yet where were the congressional hearings?

Instead of taking steps toward that accountability, Congress did the opposite: It passed a new $738 billion military spending bill, effectively approving and fueling the wars. Despite vocal condemnation of the bill from California Democrats Ro Khanna and Barbara Lee, just 41 House Democrats voted against it, compared to 188 who joined Republicans in passing it.

Among the provisions that Khanna called attention to for being stripped away from the legislation that passed: an amendment he sponsored that denied the president authority to wage war on Iran. 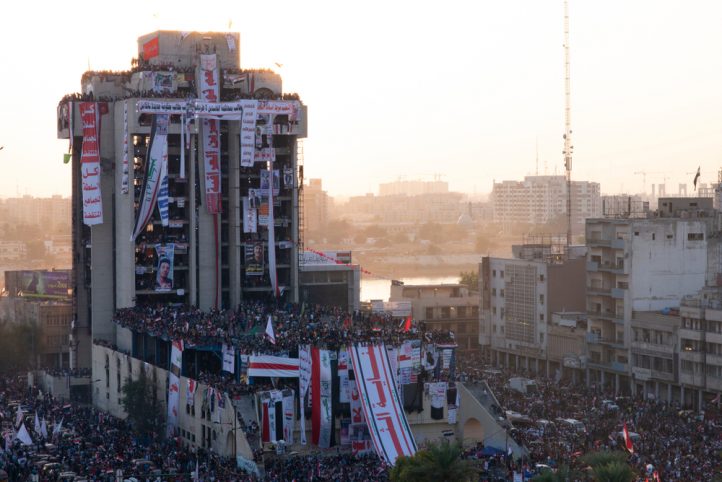 In a national address today, Trump threatened even more sanctions against Iran. As his rhetoric becomes more belligerent — and as he deploys even more troops to the Middle East to set the stage for attacks on Iran — members of Congress’ calls to bring the president into compliance with the War Powers Act are certainly welcome. But the questions that lawmakers are raising now, after the U.S. has already committed an act of war in assassinating Soleimani in Iraq, run contrary to their actions up to this point.

Going into the new year, Congress had already sent the message that Trump and the Pentagon could do whatever they please. And whatever misgivings members of Congress have about military attacks on Iran, the body has supported the sanctions imposed on that country by the United States — which have been disastrous for the Iranian population, and which act as precursors to war.

The so-called War on Terror is completely out of control. What is needed is for the widespread opposition in the U.S. to the wars waged in our names—including attacking Iran — to be turned into a fighting resistance.

We have seen mass protest under Trump—even in its brief moments—have significant impacts. The Women’s Marches may not have ended sexual violence, but they, along with the #MeToo and #TimesUp campaigns, opened the most wide reaching and serious conversations about gender-based abuse in recent memory, and some high profile abusers have been made to account for their actions. (Even a UN convention was passed, though the U.S. hasn’t ratified it.) The spontaneous, mass mobilizations to airports against Trump’s Muslim Ban set back those plans for a time as well.

We need to extend that resistance to a U.S. military machine that’s moving like a runaway train, undeterred by the human costs of its destruction, or even the apparent lack of a strategy from a military perspective.

Popular power matters. There was, in fact, a moment where there was a conversation in Congress about ending U.S. support for Saudi Arabia’s cataclysmic war in Yemen — a war that has only been made possible with U.S. weapons, intelligence, and other forms of support. Despite votes in both houses to stop that assistance, Trump was able to veto the legislation, and the moment passed.

What if there had been mass actions in the streets? Could that effort have been pushed over the line?

We need to ask these questions, and imagine the answers. In doing so, we will be joining in solidarity with various efforts in the Middle East to challenge governments and the foreign powers — particularly the United States — backing them.

After all, the news that dominated headlines out of Iraq for the months prior to the U.S. assassination of Soleimani was that Iraqis were mobilizing en masse against a government whose origins lie in the 2003 U.S. invasion and subsequent occupation, and whose forces are armed and trained by billions of dollars in U.S. aid. (There were Iraqi protests that also targeted Iranian influence in the country.)

In fact, focusing on the movements of people throughout the Middle East, Africa, and Central Asia who find themselves in the crosshairs of the War on Terror must be essential to a movement here that challenges U.S. wars. Imagine the power, for example, of massive U.S. rallies coinciding with the movement inside Iraq to remove U.S. troops from the country. Imagine if more members of the U.S. Congress were compelled to follow Iraq’s parliament in calling for those soldiers to come home.

For the few conversations that do take place about our wars, it’s distressingly typical for the people having them forget about the people bearing the brunt of those wars.

After the October 26 killing of ISIS leader Abu Bakr Al Baghdadi, for example, Defense Department officials held a press conference at the Pentagon. You can read the transcript. Journalists in the room asked two questions about the storied dog who assisted in the killing operation, and several more about the prospect of U.S. personnel securing Syrian oil fields.

The reporters in the room didn’t ask a single question about whether others besides Al Baghdadi, including civilians, were wounded or killed in the mission.

Thankfully, other journalists did ask. NPR reporters learned that in the same raid where Baghdadi was killed, the Syrian farmer Barakat Ahmad Barakat saw his two friends killed by U.S. rockets—and his own hand severed from his body—as they were caught up in the attack while driving in van.

The three farmers were unarmed. Aside from the trauma of being maimed and seeing his friends killed, Barakat’s work is impossible without his hand. His life as he knew it ended.

Behind every “bad guy” like Baghdadi are masses of ordinary people suffering the endless grind of war—a grind that this country has made ever more brutal, with ever fewer constraints or accountability from the U.S. political system.

It is crucial that we are all talking about Iran now, as we stand on the verge of a new chapter of catastrophes—and work to prevent it. But the killing and destruction of the War on Terror is happening around the world, every day. The lack of attention to it is part of what keeps it going, and sets the stage for the current situation involving Iran, Iraq, and the United States.

The truth is, these wars are criminal, and any conversation about them that doesn’t center the people most impacted is unacceptable. That conversation won’t start in the U.S. government. Instead, it must be raised by those of us outraged by wars that have devastated generations, and who believe that people from Somalia to Afghanistan, and now to Iran—indeed, all of us—deserve a better world.